It was in the early morning hours of Nov. 23 in Saigon when four urgent cables from Newsweek were delivered to my apartment by the Vietnamese messenger. The cables were in jumbled order and made no sense to me. My editors in New York, where it was still afternoon on the fateful day of Nov. 22, 1963, wanted reaction from leaders and commoners to President John F. Kennedy’s assassination and an appraisal of newly sworn in President Lyndon Johnson.

I was stunned by this horrific news about another assassination coming just three weeks after the murder of Vietnam’s President Ngo Dinh Diem, a Catholic who was overthrown after losing the support of America’s first Catholic president. 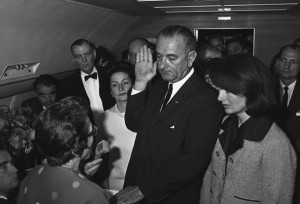 Slipping into daytime clothes, I raced down the concrete hallway, my bare feet barely touching the clammy surface, to the apartment-office of John Sharkey, who worked for the National Broadcasting Co. With his ear cocked to his radio, John confirmed that Kennedy was shot and pronounced dead.

To answer my New York editors, I filed lots of reaction because both Kennedy and Johnson had been so significant for Vietnam: Kennedy for increasing U.S. support for the South Vietnamese government in its fight against communism and Johnson as vice president for paying a state visit there and meeting Diem in May 1961. But not a line of my copy was printed by my Newsweek editors.

Nor, 50 years later, is there any inkling in today’s extensive news coverage of the half-century anniversary of Kennedy’s assassination that his murder may have had some connection , a kind of unscripted payback, for his supporting the Nov. 1 overthrow of Diem, who was hours later murdered inside an M-113 armored car with his hands tied behind his back alongside his brother Nhu.

Yet, 50 years ago in Saigon, the two killings were immediately linked in the minds of many Vietnamese, with Kennedy’s assassination evoking a flashback to the still-fresh murders of Diem and Nhu. A Vietnamese maid explained to me in fractured French and English, “Mr. Diem bang; Mr. Nhu bang; President Kennedy bang, beaucoup beaucoup morte; beaucoup trouble de Saigon” a prophetic insight given the horrendous bloodshed that would follow Johnson’s subsequent escalation of the Vietnam War.

Similarly, a Vietnamese telephone operator told me in jumbled English, “The United States same as Vietnam, much trouble.”  Pointing to imaginary holes in her head, she added, “Now Kennedy is same as Diem.”

These Vietnamese views merging the two assassinations were echoed by Kennedy’s successor. The day after Kennedy’s funeral and before moving into the White House, according to historian Ellen J. Hammer, Johnson walked down the hallway of his house and, pointing to the wall where a portrait of Ngo Dinh Diem hung, remarked: “We had a hand in killing him. Now it’s happening here.”

The next year, according to historians Arthur M. Schlesinger, Jr. and Robert Dallek, Johnson is reported to have said, “What happened to Kennedy may have been divine retribution.”

Nor was Johnson the sole official then to connect the assassinations in Saigon and Dallas. The Senate’s leading expert on Asia, Sen. Mike Mansfield, is quoted by historian Seth Jacobs as saying in mid-1965 when nearly 200,000 U.S. troops were in Vietnam: “We are paying for our sins in getting rid of President Diem.”

Twist and rock-n-roll music blared forth. A furor ensued and Vietnamese stopped American officers on the street asking, “Why are you celebrating the death of Kennedy?” An officer chewed out the disc-playing non-commissioned officer. Throughout the rest of the day, only light classical music was played. Troops in the field received a special edition from the American military command carrying a full front-page, black-bordered photograph of Kennedy with details of his death.

At the Joint General Staff headquarters for the South Vietnamese military junta that Kennedy had supported and encouraged to topple Diem, the generals heard the radio broadcast, could not believe it, and so checked the wire stories.

The assassination story made morning editions of only one Vietnamese-language newspaper and it immediately sold out. Otherwise the story got no play because the Kennedy assassination reminded Vietnamese of the assassination of Diem and Nhu, a gruesome event that put the new government in an unfavorable light.

Kennedy was popular with the Vietnamese in part because he was such a young world leader in an area of the world that traditionally teaches respect for elders and the old order. A perky Vietnamese secretary in pink ao dai stopped me and asked in mixed-up English: “Did you cry when you heard about your president? I could not wake up. … I loved him; I had seen his picture many times.”

The situation in Vietnam had changed momentously in the 29 months since President Kennedy had dispatched Vice President Johnson to Southeast Asia in May 1961, I wrote in my dispatch to Newsweek.

During that visit, Johnson and his wife gave a reception for Saigon government leaders and diplomats on the lawn of the crÃ¨me-colored Gia Long Palace, then the Blair House of Vietnam. Mrs. Johnson viewed Vietnamese antiques at the National Museum with Madame Ngo Dinh Nhu. (On Nov. 1, 1963, the palace was shelled and mortared during the overthrow of Diem, and Madame Ngo was barred from Vietnam after the coup.)

At a 1961 speech to the National Assembly, in the gleaming, one-time colonialists’ opera house, Johnson pledged Kennedy’s immediate assistance for training and equipping paramilitary forces, increasing regular military forces, solving problems of additional burdens of defense, and more aid for education, rural and industrial development. Continuing his address to Vietnamese legislators, Johnson repeated one paragraph of Kennedy’s Inaugural Address: “we shall pay any price, bear any burden, meet any hardship to assure the survival and success of liberty.”

Johnson met Diem in Saigon and Dalat and, in Texas-size support, puffed up Diem’s prestige by likening him to George Washington, Andrew Jackson, Woodrow Wilson and Franklin Roosevelt. At a farewell banquet, Johnson hailed Diem as the “Winston Churchill of Southeast Asia.”

Kennedy had sent Johnson to Southeast Asia in 1961 to quiet fears of leaders there that the U.S. would decrease its support to them as it had just done in Laos by failing to back up the pro-American faction under Phoumi Nosavan when he was losing to the Soviet-supported pro-Communist/neutralist faction.

According to the Pentagon Papers, Kennedy had been told that fears of losing U.S. support had descended on South Vietnamese officials who said, “When our turn comes, will we be treated the same as Laos?” Six months after Johnson’s trip, U.S. helicopters, fighters and aircraft rolled in to bolster the morale in Saigon. However, by 1963, Kennedy had grown discouraged at the direction of the war, contemplated a U.S. withdrawal and distressed over Diem’s crackdown on Buddhist dissent sanctioned Diem’s ouster, albeit without apparently expecting the violent end.

On Nov. 1, 1963, Diem’s corpse may have provided the answer, in blood, to the South Vietnamese fears that they were losing control of their fate. Then, three weeks later, Kennedy too was drenched in blood.

Thus, as invoked in Vietnam from the “Feast of the Dead” Catholic communion, the two countries — and the two Catholic presidents — experienced Day of Wrath! O day of mourning.

Beverly Deepe Keever was a Saigon-based correspondent who covered the Vietnam War for a number of news organizations. She has published a memoir, Death Zones & Darling Spies.