The American Republic is facing a crisis of political immobility caused by Tea Party extremism overcoming the traditions of compromise that date back to the Founding. History has troubling lessons for such moments, but there are signs of hope, says ex-CIA analyst Paul R. Pillar.

Last month, Dov Zakheim, in the course of discussing the baleful influence of the Tea Party phenomenon on U.S. national security, likened some of what we are seeing to the French Fourth Republic, which lasted only a dozen years following World War II.

The comparison is apt, and not only with regard to the effect an image of unreliability, which in the case of the Fourth Republic stemmed largely from short-lived, revolving-door governments, has on foreign relations. We also have been seeing in Washington much of what the French called immobilisme: a simple inability to get things done. 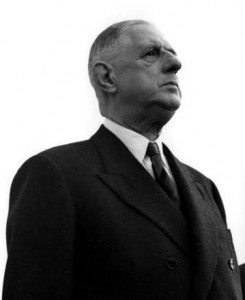 With a historical precedent such as that, we naturally should think of what lessons the precedent might hold for how we could get out of our own similar problems. What brought the Fourth Republic to an end and opened the way to the longer-lived and relatively more stable Fifth Republic was not just impatience and disgust with the immobilisme but a full-blown crisis involving the insurrection in Algeria, which had begun in 1954. Portions of the French army began revolting, with the high command that was fighting the war in Algeria making common cause with French settler interests and threatening to move on Paris.

Also crucial to what would follow was political leadership and one leader in particular: Charles de Gaulle, the French Cincinnatus and leader of the Free French in World War II. The rebellious generals of 1958 insisted that de Gaulle come back from Colombey-les-Deux-Églises and rescue the nation once again. De Gaulle did so, becoming the last premier of the Fourth Republic before becoming the first president under the new constitution of the Fifth.

The outsize prestige and stature of de Gaulle were needed even beyond that moment, as the Algerian insurgency wore on. Contrary to the expectations of some of those who had called for his return, de Gaulle concluded that Algerian independence had to be accepted and initiated peace talks. A quartet of French generals who, along with pieds noir French settlers, could not stomach that concept attempted a putsch in Algiers in 1961.

De Gaulle stared down that move but then had to contend with a terrorist campaign by the Secret Army Organization, led by Raoul Salan, a former commander of French forces in Indochina and an escaped perpetrator of the putsch. For an American comparison, imagine if a former commander of U.S. forces in Iraq or Afghanistan had first attempted a coup and then formed a terrorist group that started setting off bombs in American cities. In short, really bad stuff.

We do not want to go through anything like what the French went through. If this is the cure for immobilisme, it would be fair to say the cure is even worse than the disease.

The right response to that gloomy conclusion is to look for even partial cures, including ones in our own experience. They exist, particularly in the reform of election laws. This kind of procedural and legal engineering can do much to overcome even the less salubrious aspects of contemporary American political culture.

For an exemplar and for lessons we can look not to France of the 1950s but to California of the past few years. Two pieces of electoral reform have been especially beneficial. First, California is one of the few states that have taken legislative and congressional redistricting out of the hands of state legislatures and given the task to nonpartisan commissions.

Second, California is one of three states (Louisiana and Washington are the others) to adopt the open primary system, in which the top two vote-getters regardless of party face each other in a second round election if no one gets a majority in the first. These two changes have greatly increased the need for politicians, if they are to be elected, to appeal to a broader spectrum of opinion rather than to a narrow party base.

The results in California have been dramatic. In short order it has gone from a model of fiscal and political dysfunction at the state level to a place in which much productive across-the-aisle work gets done. There is no doubt that making the same electoral changes across the country would make an enormous difference in how the U.S. Congress operates. How Congress operates now, with the frequently invoked threat of a Tea Party primary challenge exemplifying why it operates that way, richly earns it its nine percent approval rating from the American public.

Part of what made electoral reform possible in California is that it is easier there than in most other states for citizens’ movements to put initiatives on a statewide ballot. That practice has its own problems, including overly long ballots and the constraining effects of the notorious Proposition 13. But it is not nearly as bad as coups and insurrections as a way of overcoming immobilisme.

Leadership has been important, in California as well as in France. A Republican governor, Arnold Schwarzenegger, provided important muscle in pushing for reform. The current Democratic governor, Jerry Brown, has used his veto power to help contain some impulses from within his own party that did not have broad support. Neither Schwarzenegger nor Brown is a de Gaulle, but they help give us hope for what leadership can do in greatly improving the way this republic works without, as the French did, tearing up a constitution and starting from scratch.