From the Archive: The U.S. capture of an alleged al-Qaeda terror leader in Libya underscores the failure of the major news media to give the public the full story during the military intervention that led to Muammar Gaddafi’s ouster and murder. Mainstream journalists behaved more like propagandists, as Robert Parry reported in 2011.

During the six-month uprising against Muammar Gaddafi, major U.S. news outlets repeated again and again that the Libyan dictator was behind the 1988 bombing of Pan Am 103 over Lockerbie, Scotland, and they ignored warnings that militant Islamists were at the core of the anti-Gaddafi rebel army.

Indeed, for Americans to get alternative views on these points, they had to search out Web sites, like Consortiumnews.com, which had the audacity not to march in lockstep with the rest of the Western media. Only outside the mainstream press would you find significant questions asked about the certainty over Libya’s guilt in the Pan Am bombing and about the makeup of the rebels. 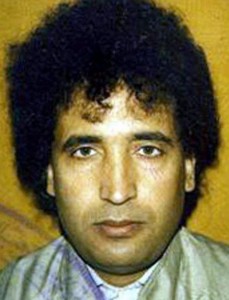 Libyan Ali al-Megrahi, whose conviction as the “Lockerbie bomber” remains a point of historical dispute.

Now, after the United States and its NATO allies have engineered the desired “regime change” in Libya under the pretext of “protecting civilians” those two points are coming more into focus. The New York Times and the Washington Post finally acknowledged that radical Islamists, including some with links to al-Qaeda, are consolidating their power inside the new regime in Tripoli.

And, the proverbial dog not barking even as Libya’s secret intelligence files have been exposed to the eyes of Western journalists is the absence of any incriminating evidence regarding Libya’s role in the Lockerbie case. Earlier interrogations of Libya’s ex-intelligence chief Moussa Koussa by Scottish authorities also apparently came up empty, as he was allowed to leave London for Qatar.

Since Gaddafi’s fall, news outlets also have reported that Libyan intelligence agent, Ali al-Megrahi, who was convicted of the Lockerbie bombing by a Scottish court and was later released on humanitarian grounds because of terminal prostate cancer, is indeed gravely ill, bedridden and seemingly near death. [He died May 20, 2012.]

Megrahi’s trial in 2001 before a panel of Scottish judges was more a kangaroo court than any serious effort to determine guilt even a Scottish appeals court expressed concern about a grave miscarriage of justice but the Western press continues to describe Megrahi, without qualification, as the “Lockerbie bomber.”

It also was common in the West’s news media to smirk at the notion that Megrahi was truly suffering from advanced prostate cancer since he hadn’t died as quickly as some doctors thought he might. After Gaddafi’s regime fell, Megrahi’s family invited BBC and other news organizations to see Megrahi struggling to breathe in his sick bed.

His son, Khaled al-Megrahi, also continued to insist on his father’s innocence. “He believes and we know that everybody will see the truth,” the younger Megrahi told the BBC. “I know my father is innocent and one day his innocence will come out.”

As more information becomes available inside Libya, the facts may finally be clarified about whether Gaddafi’s government did or did not have a hand in the bombing over Lockerbie. However, so far, the indications are that Megrahi may well have been railroaded by the Scottish judges who found a second Libyan defendant innocent and were under political pressure to convict someone for the crime.

After Megrahi’s curious conviction, the West imposed harsh economic sanctions on Libya, agreeing to lift them only if Libya accepted “responsibility” for the bombing and paid restitution to the families of the 270 victims. To get rid of the punishing sanctions, Libya accepted the deal although its officials continued to insist that Libya had nothing to do with the Lockerbie bombing.

However, amid the 2011 propaganda campaign in support of the Libyan rebels, none of this uncertainty was mentioned in the New York Times, the Washington Post or other leading U.S. news outlets. Gaddafi’s guilt for Lockerbie was simply stated as flat fact, much as the same news organizations endorsed false claims about Iraq’s WMD in the run-up to the 2003 invasion of that Arab country.

Similarly, there was scant U.S. media attention given to evidence that eastern Libya, the heart of the anti-Gaddafi rebellion, was a hotbed for Islamic militancy with that region supplying the most per-capita militants fighting U.S. troops in Iraq, often under the banner of al-Qaeda.

Instead, Gaddafi’s claims that he was battling Islamic terrorists in the Benghazi region were widely mocked or ignored in the West. Even a report by analysts Joseph Felter and Brian Fishman for West Point’s Combating Terrorism Center got short-shrift.

In their report, “Al-Qaeda’s Foreign Fighters in Iraq,” Felter and Fishman analyzed al-Qaeda documents captured in 2007 showing personnel records of militants who flocked to Iraq for the war. The documents showed eastern Libya providing a surprising number of suicide bombers who traveled to Iraq to kill American troops.

Felter and Fishman wrote that these so-called Sinjar Records disclosed that while Saudis comprised the largest number of foreign fighters in Iraq, Libyans represented the largest per-capita contingent by far. Those Libyans came overwhelmingly from towns and cities in the east.

“The vast majority of Libyan fighters that included their hometown in the Sinjar Records resided in the country’s Northeast, particularly the coastal cities of Darnah 60.2% (53) and Benghazi 23.9% (21),” Felter and Fishman wrote.

The authors added that Abu Layth alâ€Libi, Emir of Libyan Islamic Fighting Group (LIFG), “reinforced Benghazi and Darnah’s importance to Libyan jihadis in his announcement that LIFG had joined alâ€Qa’ida.”

Some important al-Qaeda leaders operating in Pakistan’s tribal regions also are believed to have come from Libya. For instance, “Atiyah,” who was guiding the anti-U.S. war strategy in Iraq, was identified as a Libyan named Atiyah Abd al-Rahman.

It was Atiyah who urged a strategy of creating a quagmire for U.S. forces in Iraq, buying time for al-Qaeda headquarters to rebuild its strength in Pakistan. “Prolonging the war [in Iraq] is in our interest,” Atiyah said in a letter that upbraided Jordanian terrorist Abu Musab al-Zarqawi for his hasty and reckless actions in Iraq.

After U.S. Special Forces killed al-Qaeda founder Osama bin Laden on May 2, 2011, in Pakistan, Atiyah became al-Qaeda’s second in command until he himself was reportedly killed in a U.S. drone strike in August. [See Consortiumnews.com “Time Finally Ran Out for Atiyah.”]

However, to most Americans relying on the major U.S. news media, little of this was known, as the Washington Post itself acknowledged in an article on Sept. 12, 2011. In an article on the rise of Islamists inside the new power structure in Libya, the Post wrote:

“Although it went largely unnoticed during the uprising that toppled Gaddafi last month, Islamists were at the heart of the fight, many as rebel commanders. Now some are clashing with secularists within the rebels’ Transitional National Council, prompting worries among some liberals that the Islamists, who still command the bulk of fighters and weapons, could use their strength to assert an even more dominant role.”

“In the emerging post-Qaddafi Libya, the most influential politician may well be Ali Sallabi, who has no formal title but commands broad respect as an Islamic scholar and populist orator who was instrumental in leading the mass uprising. The most powerful military leader is now Abdel Hakim Belhaj, the former leader of a hard-line group once believed to be aligned with Al Qaeda.”

Belhaj was previously the commander of the Libyan Islamic Fighting Group, which was associated with al-Qaeda in the past, maintained training bases in Afghanistan before the 9/11 attacks, and was listed as a terrorist organization by the U.S. State Department.

Though Belhaj and the Libyan Islamic Fighting Group deny current allegiance to al-Qaeda, Belhaj was captured during George W. Bush’s post-9/11 “war on terror” and was harshly interrogated by the CIA at a “black site” prison in Thailand before being handed over to Gaddafi’s government which imprisoned and Belhaj claims tortured him.

The Times reported that “Belhaj has become so much an insider lately that he is seeking to unseat Mahmoud Jibril, the American-trained economist who is the nominal prime minister of the interim government, after Mr. Jibril obliquely criticized the Islamists.”

“Islamist militias in Libya receive weapons and financing directly from foreign benefactors like Qatar; a Muslim Brotherhood figure, Abel al-Rajazk Abu Hajar, leads the Tripoli Municipal Governing Council, where Islamists are reportedly in the majority; in eastern Libya, there has been no resolution of the assassination in July of the leader of the rebel military, Gen. Abdul Fattah Younes, suspected by some to be the work of Islamists.”

It may be commendable that the Post and Times finally gave serious attention to this unintended consequence of the NATO-backed “regime change” in Libya, but the fact that these premier American newspapers ignored the Islamist issue as well as doubts about Libya’s Lockerbie guilt while the U.S. government was whipping up public support for another war in the Muslim world raises questions about whether any lessons were learned from Iraq.

Do these prestige news outlets continue to see their role in such cases as simply getting the American people to line up behind the latest war against a Mideast “bad guy” or will they ever take seriously their journalistic duty to arm the public with as much information as possible?

← Making the Economy ‘Scream’
The Tarnished ‘Victory’ in Libya →

7 comments for “On Libya, Now They Tell Us”