The right-wing-controlled U.S. Supreme Court has put the supposed right of Americans to carry their firearms of choice over the safety of individuals who are potential victims of gun violence. That pattern may be tested again in a case to let some domestic violence offenders keep their guns, as Laura Finley explains.

The U.S. Supreme Court has now agreed to hear a case involving whether persons convicted of domestic violence misdemeanors should be prohibited from possessing guns.

The case involves James Castleman, who in 2001 pleaded guilty under Tennessee law to one count of misdemeanor domestic violence against the mother of his child.  In 2009, Castleman was found in possession of several guns, which was prohibited by a 1996 law that made it illegal for those who have misdemeanor convictions of domestic violence involving physical force or a deadly weapon to possess guns. 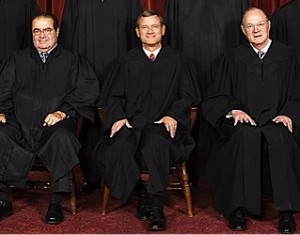 Allegedly, Castleman was purchasing weapons and selling them illegally. An appeals court in Cincinnati, Ohio ruled that the federal law does not apply in Castleman’s case because his domestic violence conviction did not involve physical force.

As a long-time domestic violence advocate and scholar who has written extensively about the subject, I am deeply concerned about the implications should the Court overturn the federal legislation.

First, we know that guns and domestic violence are a lethal mix. Numerous studies have found that the chance of a homicide increases dramatically in domestic violence cases in which the perpetrator has a gun. For instance, a study reported in the journal Trauma, Violence & Abuse found that domestic violence assaults were 12 times more likely to end in a fatality when a gun was involved. Of all females killed with firearms, almost 2/3 were murdered by intimate partners.

Second, many offenders are able to plea down to misdemeanor offenses when what they really did would be a felony. Were the Supreme Court to exclude misdemeanors that do not involve physical force, the result might be that some very dangerous people who were able to use the ubiquitous plea bargain system in the U.S are allowed to possess lethal weapons.

Third, advocates know that domestic violence is patterned behavior that escalates over time. Thus while it may not start with physical force, the non-physical forms of abuse (threats, intimidation, verbal harassment, etc.) are important signs that the abuse is likely to become physical at some point. To exclude those who are convicted of non-physical forms of abuse is a failure to understand the dynamics of domestic violence that are well-documented in scholarly research.

Fourth, there are tremendous issues already with enforcement of the existing laws related to domestic violence and firearms. A 2002 Report to the Ranking member of the House of Representatives Committee on the Judiciary found that between 1998 and 2001, more than 2,800 people who had misdemeanor domestic violence convictions were able to purchase guns without their conviction being detected by the National Instant Criminal Background Check System.

Those who purchase guns at gun shows or online are not subject to background checks, thus their misdemeanors or felonies are not detected. Additionally, some state laws, like those in Florida, do not explicitly require the removal or surrender of firearms at the scene of a domestic violence incident. If three years have passed since the misdemeanor conviction, Florida law allows abusers to purchase guns.

I could go on and on, but I will not. I only hope that the Supreme Court has the wisdom and compassion to realize the consequences of any ruling that makes it easier for abusers to obtain guns.