Politics and propaganda continue to color how the world views the existential issue of nuclear weapons. Some nations are treated as if they are entitled to have nukes while others aren’t. Yet, the risks from use in an accident or in desperation would seem to apply to all nations, as Winslow Myers notes.

Eric Schlosser’s hair-raising new book about actual and potential accidents with nuclear weapons, Command and Control, sharpens the dialogue, such as it is, between the anti-nuclear peace movement and nuclear strategists who maintain that these weapons still enhance the security of nations.

We can imagine a hypothetical moment somewhere in time. No one can say when exactly, but for my money it is definitely far in the past. Before that moment, perhaps it was the Cuban Missile Crisis of 1962, or perhaps one of the terrifying incidents Schlosser describes, when computer glitches caused the Soviets or the Americans to misperceive that nuclear missiles had been launched, realists could argue that the deterrent effect of the balance of terror was preventing world war. 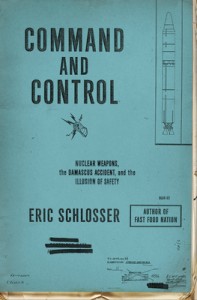 After that moment, the more nuclear weapons, the more risk and insecurity for the planet as a whole and therefore for all nations whether they have the weapons or not.

One of the important points that Schlosser makes, one which former Secretary of Defense William Perry has also emphasized, is that our present moment is not less dangerous because the Cold War has passed and treaties have reduced the overall numbers of warheads, but much more dangerous, because military service in the nuclear weapons sector is considered a career dead-end, and the very lack of post-cold-war tension increases potential carelessness.

At least General Curtis Lemay, whom John Kennedy had to restrain from launching World War III by attacking Cuba in 1962, pushed the Strategic Air Command to adhere to strict protocols for the safer handling of the weapons. Still, even that additional rigor was insufficient to prevent some of the near-disasters that Schlosser chronicles in such vivid detail.

The ultimate absurdity of the whole system of security-by-nukes is the potential of nuclear winter, which posits that it would only take the detonation of a small percentage of the total warheads on the planet to loft enough soot into the atmosphere to shut down world agriculture for a decade, in effect a death-sentence for all peoples and nations. Wherever the hypothetical line is before which nuclear weapons enhanced international security, the possibility of nuclear winter demonstrates irrefutably that we are on the other side of that line.

If some superior intelligence equipped with an interstellar version of the Diagnostical and Statistical Manual of Mental Disorders looked closely at the accepted order of things on our planet, they would have serious misgivings about our mental health. As such a visit from aliens seems unlikely to happen, we come to the question of authority here on earth.

Ever since Robert Oppenheimer and other scientists gave us nuclear weapons, other deep thinkers like Herman Kahn in his book Thinking about the Unthinkable and Henry Kissinger have tried to make rational the permanently irrational subject of mass death.

In retirement, Kissinger has thrown up his hands and works now for total abolition. He does this because he knows from experience that nuclear weapons put us in the realm of Donald Rumsfeld’s unknown knowns, no matter what experts may assert, we do know that no one knows how a nuclear war might begin. We have a somewhat clearer idea of how it would end, and “victory” is not one of the words that we associate with such an end.

No one defined more exactly the reasons why we have been so slow to acknowledge our own madness than the late United Nations Secretary-General Dag Hammarskjold:

“It is one of the surprising experiences of one in the position of the Secretary-General of the United Nations to find in talks with leaders of many nations, both political leaders and leaders in spiritual life, that the view expressed, the hopes nourished, and the trust reflected, in the direction of reconciliation, go far beyond what is usually heard in public.

“What is it that makes it so difficult to bring this basic attitude more effectively to bear upon the determination of policies? The reasons are well known to us all. It might not be understood by the constituency, or it might be abused by competing groups, or it might be misinterpreted as a sign of weakness by the other part. And so the game goes on, toward an unforeseeable conclusion.”

On Sept. 26, the UN hosted the first ever High-Level Meeting on Nuclear Disarmament. Russia and the United States boycotted the meeting.

The urgent and primary task is educational, and that is where you and I can do our small but necessary part, with letters to our newspapers and our legislators. The task is to seed into worldwide discourse the complete dysfunctionality of “realist” nuclear rhetoric, an act of love on behalf of our beautiful and deeply threatened planet.

If we succeed in changing the paradigm, a moment in time will come, again a hypothetical, indefinable moment, when the majority of the world’s people and leaders, Barack Obama and Vladimir Putin and Benjamin Netanyahu and Hassan Rouhani, the new head of Iran, the thinkers and the generals of the nine nuclear powers, the corporations who make money off these weapons, all will come to realize the futility of the course we are on.

And together we will begin to change. God help us, may no fatal accident or misinterpretation happen before that moment arrives.

Winslow Myers is syndicated by PeaceVoice, is the author of Living Beyond War: A Citizen’s Guide, and serves on the Advisory Board of the War Preventive Initiative.

← Poisoning the US-Iran Detente
What the IRS ‘Scandal’ Wrought →

2 comments for “Losing Control of Nukes”