Iran’s new President Hassan Rouhani renounced again any Iranian interest in building a nuclear weapon and proposed serious negotiations with the West. But the question remains: Will the Obama administration spurn Rouhani’s offer of an olive branch? ask Flynt and Hillary Mann Leverett.

As New York prepares for the annual opening of the United Nations General Assembly, the volume of Western media speculation about the prospects for a U.S.-Iranian diplomatic breakthrough has mounted to impressive levels. Predictably, much of this speculation amounted to little more than wondering how many concessions the Islamic Republic’s new president, Hassan Rouhani, is willing and will be able to make, especially on the nuclear issue.

As usual, we prefer looking at facts and authoritative statements of official positions over the speculation of journalists and pundits. In this spirit, we want to highlight a few passages from President Rouhani’s much noted Op-Ed in the Washington Post. 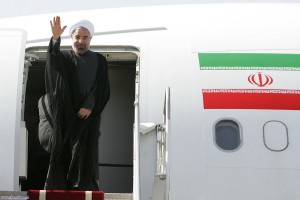 “It is, or should be, counterintuitive to pursue one’s interests without considering the interests of others. A constructive approach to diplomacy doesn’t mean relinquishing one’s rights. It means engaging with one’s counterparts, on the basis of equal footing and mutual respect, to address shared concerns and achieve shared objectives. In other words, win-win outcomes are not just favorable but also achievable. A zero-sum, Cold War mentality leads to everyone’s loss.”

The explicit reference to not relinquishing one’s rights is, of course, very much of a piece with Rouhani’s statements, during his presidential campaign and since his election, that he is not about to surrender Iran’s right, as a sovereign state and as a non-weapons state party to the Nuclear Non-Proliferation Treaty (NPT), to enrich uranium under international safeguards.

Unfortunately, there is no concrete indication that the Obama administration is prepared to acknowledge this right. In fact, one can find multiple statements from administration officials over the last five years publicly denying that there is such a right. (This is, among other things, a legally and intellectually dishonest reading of the NPT.)

The second passage from President Rouhani’s Op-Ed that we want to highlight here explains with admirable clarity why the Islamic Republic is not about to compromise its right to safeguarded enrichment (again, emphasis added):

“We must also pay attention to the issue of identity as a key driver of tension in, and beyond, the Middle East. At their core, the vicious battles in Iraq, Afghanistan and Syria are over the nature of those countries’ identities and their consequent roles in our region and the world. The centrality of identity extends to the case of our peaceful nuclear energy program. To us, mastering the atomic fuel cycle and generating nuclear power is as much about diversifying our energy resources as it is about who Iranians are as a nation, our demand for dignity and respect and our consequent place in the world.”

President Rouhani goes on to note, “Without comprehending the role of identity, many issues we all face will remain unresolved.” Indeed. Unfortunately, it remains far from clear that the Obama administration understands how tightly the matter of Iran’s nuclear rights is linked to fundamental questions of identity (like independence and control of the country’s energy resources) for Iranians who supported Imam Khomeini’s revolution and continue to support the political order it produced.

The third passage from President Rouhani’s Op-Ed that we want to highlight discusses the requirements for diplomatic progress (yet again, emphasis added):

“To move beyond impasses, whether in relation to Syria, my country’s nuclear program or its relations with the United States, we need to aim higher. Rather than focusing on how to prevent things from getting worse, we need to think, and talk, about how to make things better. To do that, we all need to muster the courage to start conveying what we want, clearly, concisely and sincerely, and to back it up with the political will to take necessary action. This is the essence of my approach to constructive interaction.”

President Rouhani certainly is not the first Iranian leader to want the United States to clarify its ultimate intentions vis-Ã -vis the Islamic Republic. Unfortunately, it remains far from clear that the Obama administration is or will be prepared to lay out a clear and positive end game for nuclear talks with the Islamic Republic, for this would require the United States to acknowledge Iran’s aforementioned right to safeguarded enrichment as an essential pillar of any negotiated solution to the nuclear issue.

So, going into UN General Assembly and looking beyond UNGA to renewed nuclear negotiations with the Islamic Republic, the relevant question is not how much is Iran’s leadership prepared to concede on the nuclear issue.

Rather, the relevant question is whether Washington is prepared to abandon a strategic approach to the Middle East that has done profound damage to America’s own position in this vital region, in no small part, by rendering productive diplomacy with the Islamic Republic impossible.

Flynt Leverett served as a Middle East expert on George W. Bush’s National Security Council staff until the Iraq War and worked previously at the State Department and at the Central Intelligence Agency. Hillary Mann Leverett was the NSC expert on Iran and from 2001 to 2003  was one of only a few U.S. diplomats authorized to negotiate with the Iranians over Afghanistan, al-Qaeda and Iraq. They are authors of  Going to Tehran. [This article previously appeared at GoingtoTehran.com.]