The neocons still dominate Official Washington’s policy debates so it shouldn’t be a surprise that President Obama’s move toward diplomacy over intervention in Syria would draw criticism and denunciation. But sometimes the best course is the simply the one that’s not the worst, as ex-CIA analyst Paul R. Pillar explains.

Debate about U.S. policy toward Syria has clearly exhibited some of the downsides of a reality about any discourse on foreign policy: that everyone is free to criticize anyone else’s position or recommendations, but the incumbent president is the only one who has to come up with a real policy and try to make it work.

The Syrian issue is an especially troubling demonstration of some of these downsides because it is one for which, as I have observedsince early in the conflict, there are no good solutions. It is far easier to knock down someone else’s ideas about this issue than it is to defend any ideas of one’s own. 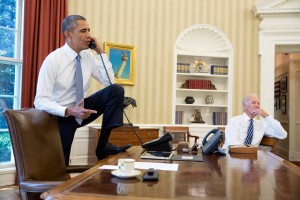 Greg Sargent of the Washington Post has noted how President Barack Obama’s handling of the Syrian situation has been roundly criticized by many people who never get around to declaring what they would do instead if they had the responsibility for making policy. A contribution to debate that is all criticism and no positive alternatives is unhelpful not only because it does not directly get us any closer to a workable policy. It does not even get us indirectly closer to an improved policy; the best policy option is not necessarily the one that is least often the target of vocal, public criticism.

The discourse on Syria has exhibited other significant defects, some of which Sargent touches upon. There has been a confusion of process with outcome. This is what President Obama seemed to be complaining about when he said he wasn’t trying to win “style points.”

The problem with this particular focus on decision-making style is not only that it may be unfair to an incumbent trying to deal with an intractable situation. It is that some of the methods likely to win points with pundits and the public are less likely than other methods to arrive at sound policy.

We like our leaders to appear decisive and resolute. We do not like them to appear vacillating and uncertain. Those preferences are understandable; they are connected to the very nature of leadership. The trouble comes when the yearning for decisiveness means criticism of the very sort of thoroughness and deliberation that is necessary to consider options carefully in the interest of arriving at the best (or least bad) option.

The benchmark at the opposite end of this spectrum is the decision to launch the Iraq War, made by a president who trusted his gut and had no policy process at all to consider whether the war was a good idea.

Obama has been charged with short-circuiting his own habitually thorough decision-making by taking a walk with Denis McDonough around the South Lawn of the White House and suddenly deciding to throw the question of an attack on Syria into the lap of Congress. But rather than abridging or cutting corners in the policy-making process, this was a move to make it more thorough, by involving in that process the legislative branch, which, by the way, is supposed to have war-declaring power under the Constitution.

This gets to another unhelpful conflation in debate and criticism about policy toward Syria, which is a confusion of motives with results. Did Mr. Obama make his move to Congress not out of some scruples of a former constitutional law professor but at least as much to spread responsibility to his political opponents and get buy-in for what would be a costly and risky military move? Of course he did.

And when he made his other big change on Syria and ran with the Russian proposal on chemical weapons, was he grasping a lifeline that helped him to get out of the consequences of his own earlier mistake when he talked about use of chemical weapons as a game-changing red line? Yes again.

But this is another example of how popular yearnings about leadership style conflict with what may be necessary to arrive at better-rather-than-worse policies. We don’t like to see our leaders change their minds because this looks indecisive, and pundits criticize this as vacillation. But changing one’s mind and one’s policy course may be necessary to adapt to new circumstances, to take advantage of new information, or as in the present case, to prevent previous mistakes from being compounded.

Given that I have criticized some of President Obama’s moves on Syria, I ought to respond to Sargent’s challenge to put up or shut up and say exactly how I would have done things differently. I would have followed all along a policy of non-intervention, for the fundamental reasons that there is no U.S. interest clearly served by one particular outcome of the Syrian civil war than another outcome, that it would be difficult or impossible for U.S. action to achieve a particular outcome of that war anyway, and that U.S. intervention would be more likely to increase than to decrease the overall violence and destruction associated with that war.

I would have endeavored to articulate this reasoning, clearly and publicly. I may have won some style points for consistency, although I also would have been pilloried on the Washington Post editorial page and elsewhere for not doing more about the suffering in Syria.

I would have made greater efforts to internationalize consideration of Syria’s political future, with full participation of both Russia and Iran. I would not have elevated the significance of chemical weapons far above that of the other sources of 100,000 deaths and other casualties in this war, and I would not have portrayed use of these weapons as a game-changer.

I hope that after the chemical incident on Aug. 21 I would have had the diplomatic agility to work with the Russians on an initiative to get Syria to surrender its chemical munitions, which should not have required threats of a U.S. air war. I can’t say I would have been that agile, but if so we may have gotten to a situation similar in important respects to where we actually are now. Once again, style is not the same as outcome.