Exclusive: “Group think” is alive and well in Official Washington, with virtually all the important pundits marching in lock-step with the Obama administration’s accusations against the Syrian government and everyone fuming over an Op-Ed by Russian President Vladimir Putin, observes Robert Parry.

There is something troubling even a bit scary to watch the mainstream U.S. media in a full stampede as we’re now seeing over the issue of the Syrian civil war and against Russian attempts to find a diplomatic way to steer the American pack from rushing over the cliff into another U.S. military intervention.

Nearly every U.S. pundit and politician from neocon to liberal is charging off in the same direction, accepting undocumented U.S. government claims about Syria’s alleged chemical attack on Aug. 21 as undeniably true and deriding Russian President Vladimir Putin for a New York Times Op-Ed that had the audacity to defend the Nuremberg principles against aggressive war. 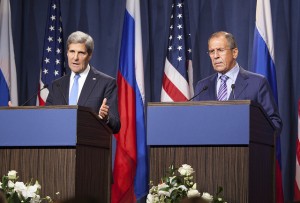 “Under current international law, force is permitted only in self-defense or by the decision of the Security Council,” Putin wrote, making an obvious and incontrovertible point. “Anything else is unacceptable under the United Nations Charter and would constitute an act of aggression.”

Putin then added: “It is alarming that military intervention in internal conflicts in foreign countries has become commonplace for the United States. Is it in America’s long-term interest? I doubt it. Millions around the world increasingly see America not as a model of democracy but as relying solely on brute force, cobbling coalitions together under the slogan ‘you’re either with us or against us.’”

Again, what Putin is saying here is clearly true, really not even debatable. U.S. presidents and pundits love to talk about America as the “indispensable nation,” a reference to its recurring role as a military interventionist around the world, supposedly to protect the interests of the “Free World” and “Civilization.”

But Putin really got under the skin of the U.S. establishment when he disagreed with President Barack Obama’s defense of “American exceptionalism.” Putin wrote, “It is extremely dangerous to encourage people to see themselves as exceptional, whatever the motivation. There are big countries and small countries, rich and poor, those with long democratic traditions and those still finding their way to democracy. Their policies differ, too. We are all different, but when we ask for the Lord’s blessings, we must not forget that God created us equal.”

Yet, for making these rather banal points, Putin was inundated with insults across Official Washington. Politicians said they were sickened by his affront, one even to the point of vomiting. Liberal Washington Post columnist Eugene Robinson, usually a thoughtful writer, mocked the Russian president in highly personal terms.

“As I read Vladimir Putin’s sanctimonious op-ed about U.S. policy in Syria, I imagined the Russian president sitting at the keyboard in a lovely pink negligee,” Robinson wrote in a column entitled “Exceptional? You bet.”

Beyond reflecting the conventional wisdom’s contempt for Putin, Robinson, like nearly every major U.S. opinion-leader, has accepted the U.S. government’s version of events regarding the alleged chemical attack on a Damascus suburb on Aug. 21.

Yet, the U.S. tally of the dead and other claims are good enough for the American pundit class, evidence not required.

“When we see more than 1,400 men, women and children killed with poison gas, it is not our nature to look the other way,” Robinson wrote. “The moral case for a strike against the Assad regime is predicated on the fact that if the United States doesn’t do something, nobody will.”

But Robinson was far from alone in his contempt for Putin and acceptance of the U.S. rendition of the murky events of Aug. 21 half a world away. Up and down the opinion pages of American newspapers, there was mouth-open-wide credulity. Beyond the opinion pages and TV chat shows, I’ve heard the same conformity of opinion from usually thoughtful think-tank “experts.” It’s clear that any skepticism now, even just calling for public release of the U.S. evidence, is a threat to one’s career.

You might have hoped that one thing that the U.S. mainstream press and pundits would have learned from the Iraq War not to mention other misguided “group think” going back to the Tonkin Gulf resolution and beyond is that the U.S. government is not always right in its assessments. Skepticism should not be equated with conspiracism.

Yet, over the last couple of weeks, I’ve been hearing a derisive and condescending tone slip into the words of the “respectable” opinion shapers toward any suggestion that the Obama administration should release recordings of intercepts, satellite photos of troop movements and other supposed proof to back up its accusations.

As I have noted before in various contexts just because a bunch of people think something is true doesn’t make it so. There was a time when most people were sure the earth was flat, but that didn’t make it flat. On Feb. 5, 2003, virtually every prominent American columnist agreed that Secretary of State Colin Powell had told the truth to the United Nations, but he didn’t. (If you doubt me, you should look at the Washington Post editorial pages for Feb. 6, 2003.)

Of course, in the specific case of the Syrian chemical attack, the U.S. government may have it right; U.S. intelligence agencies may have jumped to the correct conclusion based on questionable evidence; sometimes hastily reached judgments are correct. Maybe, U.S. officials withheld their information because they knew it could be picked apart, though they truly believed it was on target.

The Obama administration may have concluded that it was smarter, P.R.-wise, to simply assert the findings with a feigned certitude while hiding the unconvincing evidence so a credible threat of war could be mounted against the Assad regime.

However, concealing shaky evidence to induce a public consensus is not ideally how a democracy should work, especially on a question as weighty as war or peace. And it is not how an independent press corps is supposed to work, accepting evidence-free assertions from the government as fact, rather than joining in demands for the maximum possible exposure of the evidence.

If, as some expect, the United Nations inspectors next week side with the U.S. government in pointing the finger at the Assad regime for the Aug. 21 attack, more and more ridicule will be heaped on those of us who pointed out that the Obama administration was withholding its proof.

Indeed, the chest-thumping by those who clambered onto the bandwagon for war has already begun. They might be called the “See-We-Were-Right-to-Be-Credulous” contingent. But some of us will still want to see whatever evidence the UN inspectors and the U.S. intelligence agencies have collected.