The Obama administration has refused to release its supposed evidence implicating the Syrian government in the alleged chemical weapons attack of Aug. 21, and it now appears the “classified briefings” to Congress have been more a sales job than a dispassionate review of facts, a danger cited by activist John M. Repp.

U.S. congressional representatives and senators were called back to Washington D.C. last week and briefed about Syria before the fall session starts. They will have to decide whether to support Obama’s call for a military attack against the Syrian government.

I shudder when I think about this whole process. I remember that just before the invasion of Iraq, a few peace activists here in Seattle found out where one of our U.S. senators had a speaking engagement. We showed up and after the senator was finished, we buttonholed her and her two aides. 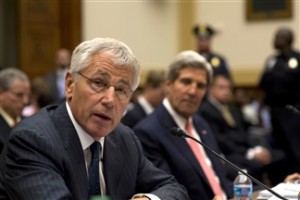 Secretary of Defense Chuck Hagel testifies before the House Foreign Affairs Committee at the Rayburn House Office Building in Washington, D.C. on Sept. 4, 2013. Secretary of State John F. Kerry and Chairman of the Joint Chiefs of Staff Gen. Martin E. Dempsey joined Hagel for the testimony. DoD photo by Erin A. Kirk-Cuomo)

We asked her how she was going to vote on the upcoming resolution authorizing the invasion of Iraq. She said several times “If you knew what I know, you would support the invasion.” She could not tell us what she knew. It was classified!

About three years later, I was again able to talk to this same senator when a peace delegation visited her office. She told us then that she had been given a top secret briefing before the invasion of Iraq that turned out to be full of false intelligence. She recognized too late that she had been fooled.

How do we know what the U.S. Congress will be told in strict confidence during the current briefings? They cannot divulge and even refer to classified intelligence in their debates. How can we the public check the validity of this information if we cannot even know what it is?

Furthermore, are not some of the same high-level people who were involved in the run-up to the Iraq invasion still part of the intelligence agencies? At that time those agencies were not able to distinguish false intelligence, even falsified intelligence from real intelligence. How do we know it will be different now?

Some of these same intelligence agencies tortured captives and then used what the captives “confessed” as good intelligence. When the intelligence services use methods like these, how can we accept their legitimacy? This all feels like something medieval, for example witch trials, or something totalitarian, like the secret police of a dictatorship.

We always hear that the intelligence services must protect their “sources and methods.” We understand why they must protect the “sources” because their sources are people, i.e., spies who could be in danger if exposed. But why are they protecting some of these more dubious “methods” in the 21st Century?

If the vote in Congress is close, could not false intelligence sway some of the less experienced representatives and senators? And, why the rush to attack Syria? This is too important a decision to be hurried.

A responsible Congress must be aware of the possibility of manipulation by classified briefing. Call or write to your representative or senator to warn them.

John M. Repp (jmrepp@q.com) Seattle, Washington, is retired and devoted to activism in the public interest.