Exclusive: While seeking authority for a limited war with Syria, the Obama administration withheld from the American people the U.S. intelligence on the alleged chemical weapons attack of Aug. 21, amid assurances that Congress got all the secret details. But that doesn’t appear to be true, reports Robert Parry.

A U.S. congressman who has read the Obama administration’s classified version of intelligence on the alleged Syrian poison gas attack says the report is only 12 pages  just three times longer than the sketchy unclassified public version and is supported by no additional hard evidence.

Rep. Alan Grayson, D-Florida, a member of the House Foreign Affairs Committee, also said the House Intelligence Committee had to make a formal request to the administration for “the underlying intelligence reports” and he is unaware if those details have been forthcoming, suggesting that the classified report like the unclassified version is more a set of assertions than a presentation of evidence. 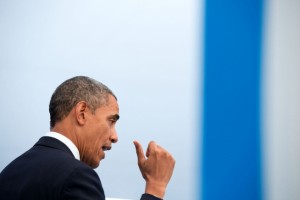 “We have reached the point where the classified information system prevents even trusted members of Congress, who have security clearances, from learning essential facts, and then inhibits them from discussing and debating what they do know,” Grayson wrote in an op-ed for the New York Times on Saturday.

“And this extends to matters of war and peace, money and blood. The ‘security state’ is drowning in its own phlegm. My position is simple: if the administration wants me to vote for war, on this occasion or on any other, then I need to know all the facts. And I’m not the only one who feels that way.”

As I wrote a week ago, after examining the four-page unclassified summary, there was not a single fact that could be checked independently. It was a “dodgy dossier” similar to the ones in 2002-2003 that led the United States into the Iraq War. The only difference was that the Bush administration actually provided more checkable information than the Obama administration did, although much of the Bush data ultimately didn’t check out.

It appears that the chief lesson learned by the Obama administration was to release even less information about Syria’s alleged chemical weapons attack on Aug. 21 than the Bush administration did about Iraq’s alleged WMD. The case against Syria has relied almost exclusively on assertions, such as the bellowing from Secretary of State John Kerry that the Syrian government sure did commit the crime, just trust us.

The Obama administration’s limited-hangout strategy seems to have worked pretty well at least inside the Establishment, but it’s floundering elsewhere around the United States. It appears that many Americans share the skepticism of Rep. Grayson and a few other members of Congress who have bothered to descend into the intelligence committee vaults to read the 12-page classified summary for themselves.

Despite the sketchy intelligence, many senators and congressmen have adopted the politically safe position of joining in denunciations of Syrian President Bashar al-Assad (where’s the downside of that), and the mainstream U.S. news media has largely taken to writing down the administration’s disputed claims about Syria as “flat fact.”

For instance, the New York Times editorial on Saturday accepts without caveat that there was “a poison gas attack by President Bashar al-Assad’s regime that killed more than 1,400 people last month,” yet those supposed “facts” are all in dispute, including the total number who apparently died from chemical exposure. It was the U.S. white paper that presented the claim of “1,429” people killed without explaining the provenance of that strangely precise number.

The New York Times editorial also reprises the false narrative that Russian President Vladimir Putin and Syria’s Assad are to blame for the absence of peace negotiations, although the Times’ own reporters from the field have written repeatedly that it has been the U.S.-backed rebels who have refused to join peace talks in Geneva. [See Consortiumnews.com’s “Getting Syria-ous About Peace Talks.”]

Nevertheless, the Times editorial states, “it was the height of cynicism for Mr. Putin to talk about the need for a Syrian political settlement, which he has done little to advance.” One has to wonder if the Times’ editors consider it their “patriotic” duty to mislead the American people, again.

Increasingly, President Barack Obama’s case for a limited war against Syria is looking like a nightmarish replay of President George W. Bush’s mendacious arguments for war against Iraq. There are even uses of the same techniques, such as putting incriminating words in the mouths of “enemy” officials.

On Feb. 5, 2003, before the United Nations Security Council, Secretary of State Colin Powell needled some intercepted quotes from Iraqi military officers to make some innocuous comments about inspecting weapons sites into proof they were hiding caches of chemical weapons from UN inspectors. Powell’s scam was exposed when the State Department released the actual transcripts of the conversations without some of the incriminating words that Powell had added.

Then, on Aug. 30, 2013, when the Obama administration released its “Government Assessment” of Syria’s alleged poison gas attack, the white paper stated, “We intercepted communications involving a senior official intimately familiar with the offensive who confirmed that chemical weapons were used by the regime on August 21 and was concerned with the U.N. inspectors obtaining evidence.”

However, the identity of the “senior official” was not included, nor was the direct quote cited. The report claimed concerns about protecting “sources and methods” in explaining why more details weren’t provided, but everyone in the world knows the United States has the capability to intercept phone calls.

So, why didn’t the Obama administration go at least as far as the Bush administration did in putting out transcripts of these phone intercepts? A reasonable suspicion must be that the actual words of the conversation and possibly other conversations would have indicated that the Syrian high command was caught off guard by the Aug. 21 events, that the Syrian government was scrambling to figure out what had happened and why, that the intercepts were less incriminating than the paraphrase of them.

That fuller story might well have undercut the U.S. case for taking military action. So, the administration’s white paper left out conversations reflecting the Syrian government’s confusion. The white paper didn’t even bother to put in the actual quote from the one “senior official” who supposedly “confirmed” the chemical weapons use.

Indeed, although the white paper states that its conclusions were derived from “human, signals, and geospatial intelligence as well as a significant body of open source reporting,” none of that intelligence was spelled out in the unclassified version. It is now unclear how much more detail was provided in the 12-page classified version that Rep. Grayson read.

In his op-ed, Grayson wrote, “The first [unclassified version] enumerates only the evidence in favor of an attack. I’m not allowed to tell you what’s in the classified summary, but you can draw your own conclusion. On Thursday I asked the House Intelligence Committee staff whether there was any other documentation available, classified or unclassified. Their answer was ‘no.’”

So, what is one to make of this pathetic replay of events from a decade ago in which the White House and intelligence community make sweeping claims without presenting real evidence and the major U.S. news outlets simply adopt the government’s uncorroborated claims as true?

One might have thought that the Obama administration understanding the public skepticism after the disastrous Iraq War would have gone to extra lengths to lay out all the facts to the American people, rather than try to slip by with another “dodgy dossier” and excuses about the need to keep all the evidence secret.

President Obama seems to believe that “transparency” means having some members of Congress interrupt their busy schedules of endless fundraising to troop down to the intelligence committee vaults and read some pre-packaged intelligence without the benefit of any note-taking or the ability to check out what they’ve seen, let alone the right to discuss it publicly.

In my 35-plus years covering Congress, I can tell you that perhaps the body’s greatest weakness amid many, many weaknesses is its ability to investigate national security claims emanating from the Executive Branch.

Beyond all the limitations of what members of Congress are allowed to see and under what circumstances, there is the reality that anyone who takes on the intelligence community too aggressively can expect to be pilloried as “unpatriotic” or accused of being an “apologist” for some unsavory dictator.

Soon, the troublesome member can expect hostile opinion pieces showing up in his local newspapers and money pouring into the campaign coffers of some electoral challenger. So, there is no political upside in performing this sort of difficult oversight and there is plenty of downside.

And once an administration has staked its credibility on some dubious assertion, all the public can expect is more of a sales job, a task that President Obama himself is expected to undertake in a speech to the nation on Tuesday. That is why the Obama administration would have been wise to have developed a much fuller intelligence assessment of what happened on Aug. 21 and then presented the evidence as fully as possible.

In the days of the Internet and Twitter and after the bitter experience of the Iraq War it is a dubious proposition that the White House can rely on national politicians and Establishment news outlets to whip the public up for another military adventure without presenting a comprehensive set of facts.