Exclusive: In a bizarre replay of America’s disastrous rush to judgment on Iraq, the Obama administration and the U.S. press corps seem set on brushing aside doubts about the Syrian government’s guilt for alleged chemical weapons attacks and pulling the lever on a new war, reports Robert Parry.

Deep inside a New York Times sidebar on the impending U.S. assault on Syria was the curious observation that whoever deployed chemicals, apparently inflicting death on hundreds of civilians last Wednesday, used “improvised tube-launched missiles,” one more factoid that should raise doubts about the Syrian government’s culpability.

The idea of an “improvised” missile would suggest the role of an irregular military force without access to regular armaments. That would seem to implicate the rebels or some paramilitary force outside the government’s direct control, although it could also be a case of the government trying to disguise its hand. 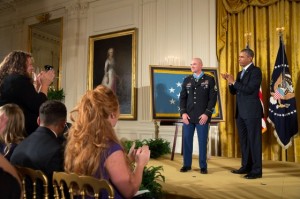 President Barack Obama applauds Staff Sergeant Ty M. Carter, U.S. Army, after presenting him with the Medal of Honor for conspicuous gallantry, during a ceremony in the East Room of the White House, Aug. 26, 2013. (Official White House Photo by Pete Souza)

Still, the evidence that “improvised tube-launched missiles” were used poses more questions about the U.S. certainty that President Bashar al-Assad is at fault, since homemade missiles would fall within the capability of al-Qaeda-allied rebels and such extremists are known for ruthless attacks that endanger and kill civilians.

Plus, the rebels would have a more obvious motive for staging the attack, just as Syria was allowing in UN inspectors to investigate earlier allegations of chemical-weapons use. Why Assad would launch a chemical attack at that moment is one of the head-scratching aspects of this unfolding mystery.

Some neocon commentators were quick out of the gate with their own spin on Assad’s supposed motivation that he was spitting in Barack Obama’s face and showing his contempt for the President’s resolve, but that sounds more like neocon agit-propaganda to prod Obama to retaliate than a serious argument.

And, as this hasty march toward war progresses, there’s also the troubling behavior of Secretary of State John Kerry and his State Department subordinates who initially demanded that Syria allow UN inspectors to visit the site of the attack but then after Syria gave its okay on Sunday began insisting that it was “too late” to collect “credible” evidence on the ground.

The Wall Street Journal reported that U.S. officials even pressured UN General Secretary Ban Ki-Moon to withdraw his inspectors without their going to the scene and collecting evidence. Despite Kerry’s statement, many chemical weapons experts say tell-tale signs of Sarin and other chemicals can be detected months or even years after an event.

So, another question must arise: Why would Kerry not want the UN inspectors to do their best to determine what really happened?

Though it’s possible that Kerry simply believes that other as-yet unidentified evidence proves Assad’s guilt and that the UN team is therefore not needed there is the troubling dÃ©jÃ  vu of President George W. Bush’s insistence that UN inspectors leave Iraq in March 2003 before they could reach a firm conclusion that Saddam Hussein’s government lacked the WMD stockpiles that Bush falsely claimed were there.

Given that history, one might think the U.S. government would be best served collecting as much evidence as possible and processing it as carefully as can be done before launching another military assault on a Middle Eastern country without approval of the UN Security Council and thus outside the UN Charter.

The Media’s Lust for War

The mainstream news media’s unseemly lust for another war also recalls those dark days before Bush’s invasion of Iraq.

On Monday, as I was waiting for a plane in the Detroit airport, television monitors showed CNN with alarmist headlines indicating that a U.S. attack could come “in hours.” To any casual observer, it would appear that CNN had been briefed on a presidential decision to attack and the missiles would fly within hours.

But the carelessness of CNN was typical of the U.S. news media’s reprise of its performance during the Iraq fiasco. On Wednesday, the Washington Post led its front page with more credulous reporting and the headline, “Proof against Assad at hand. Chemical Attack Timeline Mapped. U.S. military action appears all but certain.”

The article reported that “the Obama administration believes that U.S. intelligence has established how Syrian government forces stored, assembled and launched the chemical weapons allegedly used in last week’s attack outside Damascus, according to U.S. officials.

“The administration is planning to release evidence, possibly as soon as Thursday, that it will say proves that Syrian President Bashar al-Assad bears responsibility for what U.S. officials have called an ‘undeniable’ chemical attack that killed hundreds on the outskirts of the Syrian capital.

“The report, being completed by the Office of the Director of National Intelligence, is one of the final steps that the administration is taking before President Obama makes a decision on a U.S. military strike against Syria, which now appears all but certain.”

Though the article reported that the administration would map how the Assad regime carried out the attack, the only detail provided to buttress the U.S. certainty was that “only the government has possession of the weapons and the rockets to deliver them.”

Which brings us back to the New York Times sidebar on Page A6, written by Anne Barnard from Beirut, Lebanon. If you read down to and into the middle of the fourth-to-the-last paragraph, you would find this sentence:

“Evidence from videos and witnesses suggested that the toxic substances in last week’s attack were delivered by improvised tube-launched missiles that could be used by smaller, more mobile units than were thought to be needed for chemical weapons.”

The next paragraph noted that “Syria’s allies Russia and Iran have said the attack was carried out by rebels, who produce many homemade weapons. But the government has also used seemingly improvised weapons in conjunction with standard ones, as when its forces dropped barrel bombs from helicopters.”

However, filling an “improvised” missile with poison gas when you have a much safer alternative isn’t exactly like dropping barrel bombs from a helicopter. Granted, the technique might be employed as a deception, but Syrian officials would have to know that whatever ruse was used, they would almost certainly be blamed.

The logic of firing any kind of chemical weapon at this moment in the Syrian civil war rests much more heavily on the rebels, especially some of the al-Qaeda-affiliated extremists who have little regard for killing civilians if that will advance the cause.

Such doubts regarding the possibility that the United States is being lured into a military attack on a sovereign nation by an al-Qaeda affiliate should be enough to give President Obama and his entire administration pause. They should at least avoid a rush to judgment even if that means getting baited by the neocons and a war-hungry press.

I’m told that some U.S. intelligence analysts continue to harbor serious doubts about the certainty of Syrian guilt, unlike the administration’s senior levels. Some of these analysts say they are determined to voice their concerns whatever the personal consequences rather than following the path of their compatriots on Iraq who put their careers ahead of their duty.

21 comments for “Rushing to War Against Syria”