Tough-guy-ism is still a powerful ideology in the U.S. Congress, where House members just voted to ratchet up sanctions on Iran even as its new leadership is eager to reach an accommodation with the West on its nuclear program. This behavior raises questions in Iran about America’s real goal, writes ex-CIA analyst Paul R. Pillar.

Sometimes our political leaders act so contrary to their declared purposes, even in the face of repeated explanations and clear reasoning as to why what they are doing is counterproductive, that we have to move beyond the oft-ignored reasoning, squarely address the motives and politics involved, and think about how the leaders in question can be shamed if not coaxed into doing their jobs more responsibly.

We have such an occasion with the passage in the House of Representatives on Wednesday, by a vote of 400 to 20, of H.R. 850, the “Nuclear Iran Prevention Act,” which among other pressures would endeavor to end what is left of Iran’s oil exports by coercing remaining customers to cease their purchases. 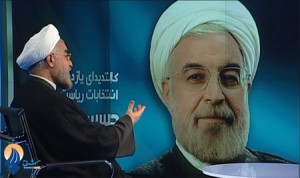 If simply piling on still more sanctions were ever to get the Iranians to cry “uncle” and unilaterally abandon all nuclear activities, this would have happened long ago as a result of the countless previous rounds of sanctions that Congress has imposed. No matter how much sanctions hurt, Iranian leaders have no incentive to make concessions unless they are presented with proposals in which concessions mean significant relief from the sanctions.

This measure in the House will be further evidence to Tehran that the United States does not want an agreement and instead only wants to punish Iranians and to change their regime. In short, it helps to kill, not to elicit, the sorts of concessions we supposedly want from Iranian leaders. It also is a further indication of the sort of hostility that stokes whatever interest there might be in Tehran in building a nuclear weapon.

These realities do not have to be explained again here. I have addressed some of the relevant principles in the past.  The role of negotiations and the conditions needed for them to succeed are addressed in a letter from former senior U.S. security officials and in a letter that more than a quarter of the members of the House of Representatives itself sent to the President just within the past fortnight. The damaging effects of H.R. 850 in particular are addressed in more recent commentaries, such as from Mark Jansson of the Federation of American Scientists and from Usha Sahay of the Center for Arms Control and Nonproliferation.

Maybe there are a few members of Congress who actually believe they are acting on behalf of the stated purpose of preventing an Iranian nuke. Maybe some think that a good cop, bad cop approach by the Executive Branch and Congress will aid western negotiators. But if it did, one would expect the administration to encourage this sort of legislation at least privately, and there is no indication that has happened. Maybe some other members simply look on sanctions as an alternative to war.

But in addition to overlooking what it takes to make sanctions support a negotiation rather than undermining it, this approach also overlooks the view of pro-war people that sanctions and failed negotiations are boxes to be checked before going to war.

Most members of Congress are smart people, as comes through much more readily in private conversation than when microphones and cameras are on. I doubt that many of them honestly believe that what they are doing in supporting a measure such as this week’s legislation is actually reducing the chance of an Iranian nuclear weapon. (Some might believe that any damage to prospects for negotiations would be small enough that they won’t feel too bad about the position they have taken.)

H.R. 850 reflects the preferences of elements, some foreign and some domestic, that do not want a negotiated agreement with Iran and are trying to use actions such as this bill to kill the chances for such an agreement. They do not want an agreement because they welcome continued attention to the Iranian nuclear issue, partly to distract attention from other issues. Some of them would welcome a war with Iran.

Many members of Congress go along with all this to stay in good graces with the elements in question, and because expressions of hostility to Iran win votes while anything that might look as being soft on Iran risks losing votes. The timing of the introduction of this bill, rushed onto the floor and to a vote before the August recess and just before the new Iranian president takes office, reinforces this interpretation.

Amid a few hopeful indications of fresh goodwill and reason in both Tehran and Washington, the anti-agreement forces decided this was a time they needed to push back with more legislative sabotage. The timing of the bill also serves as a slap in the face of the new management in Tehran, further reducing the prospects for negotiating success. And it’s not as if the House of Representatives does not have other things it ought to be doing before the recess, such as passing appropriations bills.

← Whistling Past the Wildfires
Israel-Palestine, Hope Against Hope →

2 comments for “Sending the Wrong Signals on Iran”