Exclusive: There’s an old saying that a reporter is only as good as his sources, meaning that there’s a need for people inside government who see wrongdoing to speak up. It is also a test of a democratic Republic whether truth-tellers like Edward Snowden are appreciated or persecuted, ex-intelligence analyst Elizabeth Murray notes.

As he lingers in the “twilight zone” of the transit area in Moscow’s Sheremetyevo airport, the future of U.S. whistleblower Edward J. Snowden hangs in the balance. Lobbying in the form of a personal phone call by Vice President Joseph Biden appears to have cooled Ecuadorean President Rafael Correa’s initial receptivity to the prospect of granting Snowden’s request for asylum.

Snowden now plans to request asylum from a number of other countries, including Austria, Bolivia, Brazil, China, Cuba, Finland, France, Germany, India, Italy, Ireland, the Netherlands, Nicaragua, Norway, Poland, Russia, Spain, Switzerland, and Venezuela. Russian President Vladimir Putin already issued an ambiguous, noncommittal response to Snowden’s request, indicating his preferencefor Snowden to find another host country, although he reiterated that Russia would not extradite Snowden to the United States. It’s clear that any country that accepts Snowden’s asylum bid will come under tremendous political pressure and risk the wrath of Official Washington. 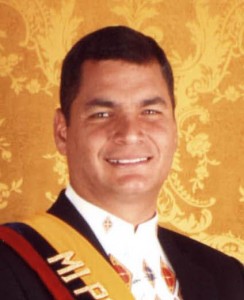 Whatever fate awaits the young American whistleblower — who recently turned 30 and who sacrificed a comfortable upper-middle class lifestyle to disclose the NSA’s expansive and arguably criminal clandestine telecommunications monitoring network which spies on the private communications of people the world over — his selfless public act of truth-telling will have left an indelible mark on the world.

The far-reaching scope of the NSA’s infringement on private communications has stunned and enraged U.S. friends and foes alike; foreign governments and their publics are now insisting on accountability from Washington — as are some U.S. congressmen and senators. Snowden has put in train a series of actions that could eventually rein in these abuses.

As the New York Times columnist Roger Cohen noted in his June 27 column, if Snowden had not taken his courageous step, “we would not know how the N.S.A., through its Prism and other programs, has become, in the words of my colleagues James Risen and Eric Lichtblau, ‘the virtual landlord of the digital assets of Americans and foreigners alike.’ We would not know how it has been able to access the e-mails or Facebook accounts or videos of citizens across the world; nor how it has secretly acquired the phone records of millions of Americans; nor how through requests to the compliant and secret Foreign Intelligence Surveillance Court (F.I.S.A.) it has been able to bend nine U.S. Internet companies to its demands for access to clients’ digital information.

“We would not be debating whether the United States really should have turned surveillance into big business, offering data-mining contracts to the likes of Booz Allen and, in the process, high-level security clearance to myriad folk who probably should not have it. We would not have a serious debate at last between Europeans, with their more stringent views on privacy, and Americans about where the proper balance between freedom and security lies.

“We would not have legislation to bolster privacy safeguards and require more oversight introduced by Senator Patrick Leahy, Democrat of Vermont and the chairman of the Judiciary Committee. Nor would we have a letter from two Democrats to the N.S.A. director, Gen. Keith B. Alexander, saying that a government fact sheet about surveillance abroad ‘contains an inaccurate statement’ (and where does that assertion leave Alexander’s claims of the effectiveness and necessity of Prism?).

“In short, a long-overdue debate about what the U.S. government does and does not do in the name of post-9/11 security, the standards applied in the F.I.S.A. court, the safeguards and oversight surrounding it and the Prism program, the protection of civil liberties against the devouring appetites of intelligence agencies armed with new data-crunching technology, would not have occurred, at least not now.”

The appreciation for Snowden’s courageous endeavor spread across the globe. “The world will remember Edward Snowden,” declared the South China Morning Post on June 25. “It was his fearlessness that tore off Washington’s sanctimonious mask.” But is there a country that will be remembered by history for being fearless enough to offer Snowden asylum?

Prior to Vice President Biden’s phone conversation with Ecuadorean President Correa (one has to wonder what sorts of carrots or sticks the U.S. offered Correa that resulted in the Ecuadorean leader’s change of heart), Foreign Minister Ricardo PatiÃ±o conducted an extraordinary press conference in Hanoi, Vietnam, on June 24. He delivered the address in Spanish, and it appears to have received little media coverage beyond an English translation of the text of Snowden’s letter requesting asylum.

–After reading out the text of Snowden’s asylum request, PatiÃ±o discussed how Ecuador reveres the principles enshrined in the Universal Declaration of Human Rights, upon which it bases its Constitution.

–He also stated that, unlike other states, Ecuador places these fundamental principles ahead of any interests or possible political pressures.

–PatiÃ±o added it was a paradox that the person shining a light on U.S. misdeeds that violated of the rights of people the world over was the one being persecuted, rather than those guilty of committing mass espionage on private citizens and governments being punished.

–Snowden, PatiÃ±o noted, was being cast as a traitor.  However, the foreign minister wondered whether the concept of treason in this case referred to a betrayal of the power elite rather than a betrayal of the American people, whose rights had been violated.

–PatiÃ±o said Ecuador has laws that shield the confidentiality of news sources, including whistleblowers, and that such protections were vital for those who had knowledge of crimes and wrongdoing, so that they could freely expose them and thus prevent future crimes.

–PatiÃ±o remarked that, as the war on Iraq was based on lies, it would have been extremely valuable if a whistleblower had spoken out prior to the start of the Iraq war since this might have saved many thousands of lives.

–Finally, he promised that Ecuador would carefully study and consider Snowden’s asylum request.

Will Ecuador’s actions back up the words of Foreign Minister PatiÃ±o? Having previously provided political asylum to Wikileaks founder Julian Assange, President Correa has shown that he possesses uncommon courage and leadership. It would be a shame to see Ecuador — which prides itself on being an independent Latin American country that has repudiated the status of a banana republic — buckle so soon under U.S. pressure.

As China’s Global Times newspaper wrote upon Snowden’s departure from Hong Kong: “We wish Snowden good luck in this difficult time. His personal fate will reflect the game between U.S. hegemony and global pursuit for fairness and justice.”

What happens next also will be a test of whether America’s democratic Republic retains the necessary respect for civic courage, which can be defined as putting one’s own welfare aside for the benefit of the larger society, a prerequisite for this form of government which is by, of and for the people.

Or as WikiLeaks tweeted on June 30, in response to a tweet wondering whether Christians ought to support whistleblowers Edward Snowden, Bradley Manning and Julian Assange: “For there is nothing hidden which will not be revealed, nor has anything been kept secret but that it should come to light.”(Mark 4:22)

15 comments for “Why Snowden’s Fate Matters”