Many on the American Right say they’re strong Christians, but have bought into Ayn Rand economics which disdains government help for the poor and needy. Other Christians, like Sojourners’ Jim Wallis, see Jesus’s teachings enshrined in the Constitution’s commitment to the common good, writes Rev. Howard Bess.

Jim Wallis, editor of Sojourners Magazine, argues in his most recent book, On God’s Side, that a key part of the foundation of the United States is its commitment to the common good for every citizen, a principle found in America’s founding documents including the Declaration of Independence and the Constitution.

Wallis does not equate common good with religion’s love of neighbor, but he does believe they have enough kinship that devout religion and a secular government committed to the common good can join together to produce a more just, equitable and peaceful nation. 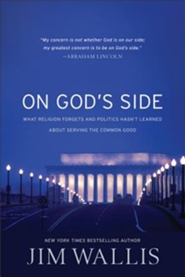 Mr. Wallis makes his case that modern America has tragically defined itself first by unconstrained personal freedom, and second by the pursuit of wealth without regard to equity, justice or charity. Both of these defining traits have forsaken the common good inherent in the founding documents and in the teachings of Jesus and other great religious leaders.

From Mr. Wallis’s perspective, corporations without soul or conscience have been allowed to gain control of the life of the nation. Corporations have become too big to fail and too powerful to submit to meaningful regulation. The greed that drives American corporate life has produced unimaginable wealth for the rich and nagging poverty for the poor. The American middle-class is shrinking. At one time, the minimum wage was a living wage. Today’s minimum wage must be supplemented by food stamps and subsidized housing.

For me, the argument that is being made by Jim Wallis is convincing. His statistics are overwhelming. The kind of economy that America has developed is not only unjust but it also is unsustainable. If significant economic changes are not made, the plight of the poor can only grow, the middle class will disappear, and wealth will be sequestered by the richest elite. The common good will have suffered an overwhelming defeat.

Is a moral economy possible in a modern capitalist world? Can the common good become a significant factor in the structuring of the American economy? This is a challenge that must be addressed by religious bodies of every kind. It is also the challenge of sensitive Americans who recognize the folly of the present economic structure and the imperative of the common good. Are there enough Americans, religious and non-religious, who care enough about their neighbors to bring about a new economic day?

There is a huge shake-up of the structures of American Christians. Apparently, a new breed of young Christians has decided to take the social agenda of Jesus seriously. Do they dare raise the moral issues that have been presented to America by corporations driven by naked greed?

Through the history of the nation, Americans have confronted glaring social evils. I am awed by the confrontation required to eradicate the evil of slavery. The magnitude of the change that was triggered by emancipation stretches my imagination. Common good demanded to be served and after the bloody Civil War was served.

For the first century and a half in the nation’s history, women were not allowed to vote. Again common good demanded to be served and after a long battle the Nineteenth Amendment was enacted. Similarly, civil rights for all could not be denied. Common good demanded justice and it was achieved, again after a long and painful struggle. Full civil rights for gay and lesbian Americans also appear to be inevitable, as again common good must be served.

Economics is just as much a moral issue as slavery, women’s suffrage, racial equality, and gay rights. For the informed Christian it is now obvious that Jesus protested opulent wealth and unjust labor practices. He identified with the poor and needy. He associated service with greatness, not wealth. Following the lead of Jesus in demanding economic justice, I am not ready to give up on the Jesus way. How? Get information. Call for repentance. Protest. Organize. Get involved.

I serve on the board of a small not-for-profit corporation. We have an executive director and employ social workers. The board has placed a demand on the executive. The corporation shall have no employee who is not paid a living wage, who does not have health insurance for self and family at no cost to the employee, and who has no retirement program.

It is the demand of the common good and a priority of a good neighbor.

The Rev. Howard Bess is a retired American Baptist minister, who lives in Palmer, Alaska. His email address is hdbss@mtaonline.net.

← The High Cost of Deportations
Toward a US-Iranian Detente →