From day one of his first campaign for President, Barack Obama promised a kinder more humane treatment of undocumented migrant workers and their families. But his administration has been nothing short of brutal when it comes to his policies.

Some of those on the front lines fighting for comprehensive and humane immigration reform have started to refer to Obama as “Deporter in Chief.” Jesus Guzman, an organizer from Northern California is among them. 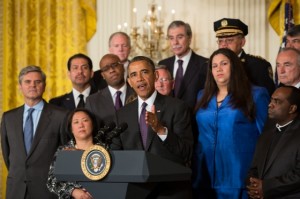 Guzman is a 23-year-old program manager at the Graton Day Laborer Center and a member of the North Bay Community Organizing Project in Northern California. He was on the podium with Obama last week during a day of activities by Latino youth who were brought to the United States at a young age and have come to be known as the “Dreamers.”

In a radio interview from Washington D.C., Guzman told the Flashpoints show on Pacifica Radio, “it’s very fitting, the name of the Deporter in Chief, because, as we mentioned, Obama is solely responsible for his administration’s record rate of deportations. It’s something George Bush could not accomplish, nor any other president before him.

“And we still have the deportation machinery in place through Secure Communities, through this collusion between local law enforcement and ICE [Immigration and Customs Enforcement] agents and The Department of Homeland Security (DHS).

And says Guzman, the Obama administration plays fast and loose with the facts. “Seven out of ten folks that are deported through Secure Communities,” said Guzman “have no convictions, or a minor offense. Yet when they [administration officials] talk about the deportation, they continually say that these are criminals, these are felons. The facts don’t reflect that.”

Pablo Alvarado, Director of the National Day Labor Organizing Network or NDLON, spent the last several weeks lobbying in Washington for humane and meaningful immigration reform. NDLON represents migrant workers all over the country. Alvarado agrees with Guzman, and paints a picture of the stark reality of the situation.

“It’s always hopeful when the issue of migration is being discussed at the highest levels of government,” Alvarado told me in an interview from Washington last week. “But usually when this issue is discussed here in D.C. it is the divorced from reality.”

“At the same time that all these things were happening here in the capital,” said Alvarado, “eleven hundred people were being separated from their loved ones and being deported. That’s the number, eleven hundred people a day. And the majority of the politicians do not understand the suffering that our community is going through.”

NDLON, now with day-labor centers around the country, was formed to protect workers from abusive employers who often refuse to pay their workers and threaten them with exposure and deportation if they complain about being beaten or cheated. It is on the new cutting edge of immigrant worker rights.

Alvarado also refers to Obama as the Deporter in Chief: “There is no other president that has deported as many people as President Obama has. The administration has a self-imposed quota, of four hundred thousand people a year. President Obama claims that he is deporting people who have committed horrible crimes, and he continues to equate the issue of immigration with crime, which is not what it is.”

Alvarado is deeply concerned that politicians from the President on down are too far removed from the day-to-day struggle to feel the life and death urgency that so many undocumented people feel every day, when they pass a cop car, while driving without a license because they have no choice, or hear a knock on the door, or get a call from school from a principal who has just been contacted by the DHS.

“For these politicians,” said Alvarado, “this quota is just another statistic but for our community, it’s about our fathers, our mothers, our sons, daughters, nephews, nieces. Eleven hundred people will be deported by the end of the day today!”

“We need to remove the threat of deportation,” he said, “to allow the undocumented people to fully participate in the debate. And if we remove the fear of deportation it will provide the safe space, the safe environment for immigrants to come forward and walk the halls of Congress, participating in shaping this debate.”

“There’s a family member of mine,” said Guzman, “an uncle, who was deported, it was last year and the question when that came up was ‘Should the entire family move to Mexico?’ Some of my cousins, the sons and daughters of my aunt and uncle are struggling now: ‘Should we stay, Should we all go together?’ And so it’s very personal for me; it’s my own family, whether it’s my parents, whether it’s my aunts, uncles, cousins.”

Guzman said: “President Obama has set that precedent of exercising his executive authority to end the deportation for a particular group, and that is for dreamers. Now that same precedent could then be extended to my parents, and to the rest of my community, to end these deportations and put the pressure on Congress to really get their act together, and work to pass the most humane immigration reform bill that our community needs The people President Obama is deporting, if this bill were to go through, are future citizens.”

Marty Bennett, a peace and labor activist who lives in Sonoma County California, works closely with Guzman at the Northbay Organizing Project. Bennett, who is also affiliated with the Living Wage Coalition of Sonoma County which is part of a nationwide network called Jobs for Justice, was in Washington D.C. last week with Pablo Alvarado and Jesus Guzman. They lobbied members of Congress, mostly Democrats, to support humane immigration reform, and to urge them to resist any attempt to water it down, delay it or make it meaningless.

“Part of what we’re doing is lobbying our Congress people and senators to ask, as this bill moves out of the Senate, hopefully by the July 4th weekend, and into the House, that there are certain provisions that we really want to see stay in it. We would like it to remain whole as is,” Bennett said, adding: “there are certain provisions that we’ve been emphasizing with the Congress people” that have to do with immigrant worker rights.

Bennett said the Jobs for Justice network has been lobbying for specific labor protections, such as “the so-called U visa that would protect the right of any undocumented worker to speak out about their labor rights, their right to organize, their right to form a union, and to be free from retaliation by the employer.

“And it’s part of another piece of legislation that has been folded into comprehensive immigration reform called the Power Act. And, essentially, it would prevent employers from using immigration status as a club to break an organizing drive,” said Bennett, “and it would give protections to undocumented workers who were exercising their labor rights.”

Bennett said he is also lobbying Congress to legislatively reverse recent a court decision “that took away the right of undocumented workers to file a lawsuit against their employers, when they believed that their labor rights had been violated, and to get back pay, to get damages and other remedies through the courts. The Senate restores that right to undocumented workers.”

In the case of the thousands of undocumented women who work in private households, the physical violence regularly includes beatings, sexual assault and rape.

Ai-jen Poo, co-director of the National Domestic Workers Alliance who in 2012 was honored as one of Time Magazine’s 100 most influential people in the world has spent a decade organizing on behalf of domestic workers. That struggle culminated in the passage of the groundbreaking Domestic Workers Bill of Rights in New York State, which earned her the informal title of “the Nannies’ Norma Ray.”

I spoke with Ai-Jen Poo last April about the multiple dangers undocumented women face as domestic workers. She said the risks that domestic workers take when they speak out are great, but more and more women are speaking out and putting themselves in harm’s way by doing so. “I see the most incredible acts of courage every single day in our work force,” she said.

Ai-Jen Poo said it is particularly dangerous for women working in private households. “What we’ve seen is the work force is incredibly vulnerable,” she said. “The work force is very isolated, working in individual scattered homes around the country. No one knows really where they are or which households have domestic workers. So there’s a high degree of vulnerability and a legacy of exclusion and discrimination.”

Pablo Alvarado is convinced that it is only the actions of grassroots groups in Washington and around the country that have made the issue of mass deportations a subject of debate.

“It is back in discussion,” said Alvarado, “because people have fought, [because] undocumented people and their allies have fought back, at all levels, in court, at the work place, in churches, at universities, in the streets, and we’ve built a real powerbase. That’s why this debate is back. So now, we have to make sure that we utilize our power the right way, so that the proposal that is on the table is as inclusive as possible.”

Guzman and some other “Dreamers,” who were at the White House last week in support of an immigration reform bill before Congress, thought they would have a brief chance to raise the issue of mass deportations with the President, but he gave some brief remarks, smiled for the cameras and then was quickly hustled out of the room. This apparently only increased the resolve of the young Dreamers to take whatever peaceful action they can to fight for what they believe is right and just.

Guzman said: “We were disappointed that we did not have that opportunity to ask him about the mass deportations. We were supposed to … all indications said that … and Huffington Post had also reported that the President was going to be taking questions. So we had prepared some questions, and I had one in particular that I had an urgency to ask President Obama in regards to the deportations. But that just did not happen.”

Undaunted, Guzman quickly added that “it’s something that we will most definitely continue to fight for if we’re not going to have the chance to ask the President about it, then we’re going to do so through direct actions so, that he’s very well aware of the suffering that’s going on in our communities.”

Leading up to the last presidential election, the Dreamers engaged in civil disobedience, risking arrest and deportation. Their actions included sitting in at various Obama campaign headquarters around the country to make themselves heard.

Says NDLON’s Pablo Alvarado: “Either Obama’s legacy is going to be that of the president that has deported more people in the history of the country, or the president who came out, and defied everyone, and said ‘I’m not going to continue deporting people.’ He can do that right now!”