Exclusive: The trial of Pvt. Bradley Manning for leaking classified documents is a test of values in the American Republic. The case pits a democracy’s need for knowledge against the government’s insistence on secrecy, a moral balancing act assessed by religious ethicist Daniel C. Maguire.

Bradley Manning is the accused but the real question is who is guilty, the accuser or the accused, the truth-teller or the secrecy-keeper, Private Manning or the U.S. government? In this case Manning is charged with truth-telling portrayed as a criminal act. 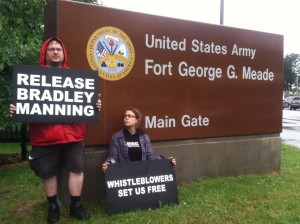 The ethical definition of a lie tells why truth-telling is not always a virtue: A lie is when you deny the truth to someone who has a right to it.

Someone who was bringing food to Anne Frank and her family every day is asked by the Gestapo if he knows the whereabouts of the Frank Family. He replies “no” and he even adds his impression that the family left Amsterdam a long time ago. All of that is false, but is it a lie? No, because the Gestapo had no right to the truth regarding the Frank family. Falsiloquium (speaking falsely) is not always mendacium (a lie.) Secrecy and concealment may be necessary to save lives.

In ethics this is called an issue of “supervening value.” In other words, ethics is a venue of competing values. Life-saving is more important than truth-telling in the Gestapo case. Telling the truth to the Gestapo would have been a lethal and immoral act.

When Truth-telling Is Right Even If Illegal

Bradley Manning is not charged with lying; he is charged with truth-telling. The central issue is whether the public has a right to know of war crimes committed by its government. A temptation to despotism lurks in every democratic society; it puts the burden of proof on the whistleblower, not on the classifier especially in matters military. In practice, the whistleblower is presumed guilty (especially if it is clear he violated the letter of a law) and the classifier enjoys an unmerited presumption of innocence..

The assumption is that the classifier saves lives while the whistleblower imperils them, but the very opposite may be and often is the truth. Excessive secrecy takes the leash off the dogs of war and people die unnecessarily.

It is a clichÃ© that truth is the first casualty in war. For that reason, the Founders reserved the right to go to war (and to continue a war) to the Congress. James Madison said that “in no part of the Constitution is more wisdom to be found.” The insight of the Framers was that truth is more likely to be served in the branch of government where open debate is de rigueur.

Truth is more likely to get out and the vox populi is more likely to be informed and heard. That is why, as Professor Bruce Russett has shown, democracies win their wars as much as 80 percent of the time since more truth gets into the cost-benefits analysis that leads to a democratic declaration of war.

The ruling principle is this: There is never a time when citizens should be more informed than when their government is killing people in their name.

Declaring war according to the Constitution has been out of vogue since December 1941. This trashing of the Constitution subverts cleansing transparency and given the misguided war choices emanating from the Executive Branch since then post-World War II history vindicates the wisdom of the Founders.

“Debacle,” not “victory,” is applicable to our undeclared military expeditions in Korea, Vietnam, Iraq and Afghanistan. That sorry record owes more to excessive secrecy than to speakers of truth. And now the history of war has turned a corner with the entrance of drones, and again secrecy is dominant, possibly to be institutionalized in a “secret court” which will decide mob-style on who is to be whacked.

Bradley Manning is being tried in a culture that makes a fair trial all but impossible. The reigning jurisprudence especially in military courts but also in the court of uninformed public opinion has given the hegemony to secrecy and concealment. The crime of cover-up has been normalized and the truth-teller, like the truth, must be imprisoned.

The arguments in any trial are like waves. What counts are the tides of assumptions that undergird and control the proceedings. A history of hegemonic secrecy beclouds this j’accuse and Private Manning like the young biblical David faces formidable odds. Silence in the face of this makes citizens complicit in the cover-up of crimes against children, women and men who are the bloodied victims of our shrouded militarized foreign policy.

Bradley Manning does not stand alone on the honor roll of patriotic whistleblowers and the good effects of his courageous act are just beginning to ripple out into history. Others have gone before him on this noble path. FBI historian Richard Fid Powers wrote in his book Broken: The Troubled Past and Uncertain Future of the FBI:

“The FBI’s power to conduct secret operations depended on its absolute freedom from any inquiry into its internal operations. On the night of March 8, 1971, that changed forever. A group calling itself the Citizens Commission to Investigate the FBI broke into the FBI resident agency in Media, Pennsylvania. The burglars were never caught.”

In witness to the fevered passion for secrecy, J Edgar Hoover launched the largest hunt in the history of the FBI, involving as many as 200 agents. That hunt failed but the noble burglary did not. It influenced the strengthening of the Freedom of Information Act in 1974 leading to the release of thousands of secret FBI documents. The FBI’s secret harassment of dissenters to the Vietnam War was exposed to disinfectant sunlight.

Military injustice may imprison Bradley Manning for revealing the crimes of our wars but Bradley Manning has served this nation, and the world, by showing again, as the Bible put it, that “you shall know the truth and the truth shall set you free.”(John 8:32)

Daniel C. Maguire, a professor of religious ethics at Marquette University, is author of Ethics: A Complete Method for Moral Choice, Fortress Press, 2010.