Exclusive: For several decades, mainstream U.S. journalists have fled from the career-threatening label “liberal,” even to the point of destroying honest colleagues who got in the crosshairs of the Right. The story of the late Gary Webb and his Contra-cocaine revelations was a troubling case in point, writes Robert Parry.

One of the Los Angeles Times reporters who joined in the orchestrated destruction of investigative journalist Gary Webb’s career has acknowledged that the newspaper’s assault joined by the Washington Post and the New York Times was a “tawdry exercise” amounting to “overkill,” which later contributed to Webb’s suicide.

This limited apology by former Los Angeles Times reporter Jesse Katz was made during a radio interview and comes as filming is about to start on “Kill the Messenger,” a movie about how, in 1996, Webb revived the scandal of the Reagan administration’s protection of cocaine traffickers involved in the CIA-backed Contra war against Nicaragua’s leftist Sandinista government. 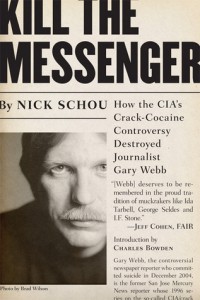 Webb’s investigative series for the San Jose Mercury News traced some of the Contra cocaine to one of the most important early manufacturers of “crack” in Los Angeles. His articles aroused anger toward the CIA especially from African-American communities which bore the brunt of crack-related violence in the 1980s. That pressure, in turn, forced the U.S. government to begin providing answers as to why sporadic media and congressional investigations into the Contra-cocaine issue in the 1980s had been met with such hostility.

In December 1985, my Associated Press colleague Brian Barger and I had been the first reporters to disclose the problem of many Contra units getting involved with the drug trade as a means of raising money. Our story prompted then-freshman Sen. John Kerry to conduct an investigation which turned up more evidence implicating the Contras.

However, the Reagan administration engaged in what amounted to a P.R. counteroffensive against the troubling revelations. President Ronald Reagan’s Justice Department devoted much of its efforts to discrediting various witnesses while the CIA hid evidence that it possessed about some of the drug-tainted Contra operatives.

It also was part of the tenor of those times that many careerist journalists realized that offending Reagan and his dedicated team of propagandists was a fast route to the unemployment line. A high premium was placed on proving you weren’t “liberal.” So, many major outlets, including the New York Times and the Washington Post, fell in line and disparaged the stories.

By the late 1980s, the Contra-cocaine scandal was pretty much buried to the satisfaction of nearly all the powers-that-be in Official Washington. Which was where matters stood until 1996 when Webb uncovered some new leads regarding what happened to the Contra cocaine once it reached the United States.

Webb’s misfortune, however, was that by 1996 those of us who had pioneered the investigations into the Contra-cocaine story, the Iran-Contra Affair and other of Reagan’s national security scandals had been pushed to the sidelines of mainstream journalism. The journalists who aided in the cover-ups had advanced to higher levels of management.

Thus, Webb’s Contra-crack exposÃ© was not treated as an opportunity to reexamine an under-reported dark chapter of recent U.S. history but as a threat to many promising careers. The right-wing media led the initial assault on Webb, but the Big Three the Washington Post, the New York Times and the Los Angeles Times quickly followed.

Arguably, the Los Angeles Times had the most to lose because Webb’s investigation focused on crimes in the Times’ backyard. As journalist and author Nick Schou has reported, the Times’ editor Shelby Coffey “assigned a staggering 17 reporters to exploit any error in Webb’s reporting, including the most minute.”

A typical way of “discrediting” Webb was to exaggerate what his articles had claimed regarding the CIA’s role in the cocaine trafficking and then mocking him as a nutty conspiracy theorist. The pile-on by the Big Media against Webb was so intimidating that Webb’s editors at the San Jose Mercury News soon lost their nerve and forced him to resign in disgrace, an outcome that was seen as vindicating the relentless attacks against him.

Even a 1998 report by the CIA’s Inspector General admitting that the CIA was well aware of the Contra-cocaine connection and systematically shielded these Cold War proxies from exposure and prosecution didn’t resurrect Webb’s career. The CIA’s report was downplayed or ignored by the major U.S. news media. [For details, see Robert Parry’s Lost History.]

Webb’s life continued into a downward spiral, viewed as a cautionary tale about the consequences of “reckless” journalism. Webb could not find decent-paying work in his own profession.

As Schou has recounted, including in his book, Kill the Messenger (upon which the upcoming movie is partly based), Webb faced personal humiliation as well as professional ruin. Finally, as Schou wrote, in December 2004, on “the same day he was to vacate his just-sold home and move in with his mother,” Webb shot and killed himself with a revolver.

On May 22 on KPCC-FM 89.3’s AirTalk With Larry Mantle, former L.A. Times journalist Katz was pressed by callers to address his role in the destruction of Webb. Katz offered what could be viewed as a limited apology.

“As an L.A. Times reporter, we saw this series in the San Jose Mercury News and kind of wonder[ed] how legit it was and kind of put it under a microscope,” Katz said. “And we did it in a way that most of us who were involved in it, I think, would look back on that and say it was overkill. We had this huge team of people at the L.A. Times and kind of piled on to one lone muckraker up in Northern California.”

Katz added, “We really didn’t do anything to advance his work or illuminate much to the story, and it was a really kind of tawdry exercise. … And it ruined that reporter’s career.”

As Schou noted in the L.A. Weekly, Webb had been reduced to near poverty by his inability to land a decent-paying job in his profession, ending up with only a part-time gig with an alternative weekly.

“But the pay couldn’t cover his mortgage and Webb had reached the end of his dwindling psychological resources,” Schou wrote. “Sadly, because Webb shot himself in the head twice, the first bullet simply went through his cheek, many falsely believe the CIA killed him. As Katz, if not the rest of the Times crew, knows, it wasn’t the CIA that helped load the gun that killed Gary Webb.”