With Private Bradley Manning’s leak trial about to start and with Wikileaks founder Julian Assange still holed up in the Ecuador Embassy in London, “We Steal Secrets,” a new big-budget documentary purports to explain the controversy but has more the look of a hit job, says Danny Schechter.

Every documentary filmmaker begins with deciding on the story to be told, and, then, how to sustain audience interest. If your goal is to inform the public or take a stand on an important issue by explaining its origins and exposing wrongdoers then you go one way. If your goal is to entertain and shroud your motives by exploring murky personality contradictions, you go another.

“We Steal Secrets,” Alex Gibney’s latest documentary (or is it a docudrama?), skillfully made with the backing of a major media company tries to do both. Ironically, that company, Comcast-Universal, owners of NBC, is at the same time having a major success with another movie, “Fast and Furious6,” glamorizing a criminal gang that relies on speedy cars. 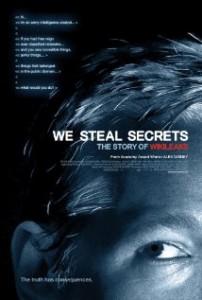 You could say that Wikileaks, the subject of “We Steal Secrets” also began with a fury a fury against war and secrecy, and was moving as fast as it could to challenge media complacency in the digital realm. Now,  it is being ganged up on by a media that invariably builds you up before tearing you down.

The docu-tract uses slick graphics to creatively report on the origins and impact of Wikileaks, the online whistleblower collective, but then, for “balance” and perhaps to pre-empt any criticisms of any bias, especially too much ideological sympathy, opened the tap on endless criticisms by Wiki-dissidents who have turned on founder Julian Assange, as well as the pathetic patriot hacker turned informant who ratted out Bradley Manning.

The movie revels in all the negatives that surround Assange and his chief and gutsy leaker, Private First Class Manning who is on the eve of a trial that could land him behind bars for life under the 1917 Espionage Act. On June 1, Manning supporters are rallying at Fort Meade, the Maryland military base where he is being held. His trial begins June 3.

Says Michael Ratner of the Center for Constitutional Rights: “The Manning trial is occurring in the context of perhaps the most repressive atmosphere for free press in recent memory. It was bad enough that the Obama administration prosecuted twice the number of whistleblowers than all prior administrations combined. Then it went after logs and records of journalists and publishers.”

Manning’s recent and widely unreported statement in Court explaining his reasons for making the secret documents public is not in the film. The film mentions, but does not explore, Manning’s claim that he offered his data first to mainstream newspapers, including the Washington Post, which showed no interest. Their failure to publish the story was one of the reasons the soldier turned to Wikileaks.

And, also, one of the reasons that validates Wikileaks claim of having a journalistic mission. So, the stakes are high, and it’s surprising that the film’s very title, “We Steal Secrets,” a statement that many might take as a Wiki-boast, was really an admission by former CIA and NSA director Michael Hayden about what the U.S. government, not Wikileaks, is all about.

It is very rare for an indy filmmaker to land interviews with top intelligence honchos. Who had the juice to get this “get” as major interviews are called in the news world? Supporters of Assange like civil libertarians, media freedom groups, Pentagon Papers leaker Daniel Ellsberg and Noam Chomsky are conspicuously absent. As a result, “We Are Secrets” seems more like a case for the prosecution than the defense, at least in the court of public opinion.

The film has had a big promotional push and is already playing in three theaters in New York, a success that masks some of its editorial failings including its in-your-face attempt at “fairness and balance,” the pretext the one-siders at FOX use as their claim to credibility. The promotional hype for the film initially made it seem like an endorsement of Assange until you read it closely.

“Filmed with the startling immediacy of unfolding history, Academy Award®-winning director Alex Gibney’s ‘We Steal Secrets: The Story of WikiLeaks’ details the creation of Julian Assange’s controversial website, which facilitated the largest security breach in U.S. history. Hailed by some as a free-speech hero and others as a traitor and terrorist”

So, there you are: the movie’s real question: Is Assange a good guy or not? And what about Manning? Why did he do what he did? So, at the outset, Gibney leaves the political plane for a psychological, or even, a psychiatric one. He is out to personalize and in the process depoliticize a very political issue for what’s known in the news-biz as “character-based story telling.”

The mantra: stick with people, not their passions, individuals not ideas.

Yes, there’s lots of information about the goals and methods of Wikileaks, but that becomes in this movie a subtext to a more Shakespearean tragedy:  the rise and fall of idealists who turn into their opposites, or are using politics to work out their twisted personal issues. Out goes more film time devoted to war crimes and information concealment; and, in comes juicy stories about sex without condoms, cross-dressing and gender conflicts to soften the brew.

The “worthy” appearance of investigation quickly turns into the nasty reality of exploitation with the focus on their subject’s flaws, not their bravery, a theme I am sure played well in the conservative board room at Comcast.

–The Village Voice asks in its review, “is a strong point of view really such a bad thing? The movie leaves you feeling lost and confused. Fix. Please.”

–The Washington Post seemed to celebrate its exposÃ© not of government  secrets, but of secret-hunter Assange, writing, “At best, Assange comes across as something of a noble jerk, a man who doesn’t care about embarrassing public figures who have done wrong.

“At worst, he comes across as a callous sociopath, someone who wouldn’t hesitate to publish unredacted details of military operations that might actually get people killed, only to lie about it after the fact by claiming that WikiLeaks had ‘systems’ in place to prevent potentially harmful disclosures. There weren’t, according to several seemingly knowledgeable individuals, including Assange’s former WikiLeaks colleagues.” (Doesn’t this reality show how bogus the oft-repeated fears of many in the media and government were?)

–The New York Times was also a bit perturbed not too much, given the paper’s frequent trashing of Assange, (after milking the secrets he gave them) describing the film as a “tale of absolutist ideals that seemed somehow to curdle and of private torment in search of an outlet with drastic results.” Again, the theme is the personal more than the political, the message: You can’t trust anyone, much less anyone challenging power.

No wonder that Assange, who was not interviewed for this movie, perhaps sensing a hit job, has turned against the movie. Wikileaks even got its hands on a script before the film’s release and annotated it to challenge its veracity. You can read it on their website at Wikileaks.org.

Wikileaks says, “The film portrays Manning’s alleged acts as failure of character rather than a triumph of conscience. The portrayal of Manning’s alleged relationship to WikiLeaks and to Assange is grossly irresponsible and suggests erroneously and when evidence is to the contrary that Assange may be guilty of conspiring with Bradley Manning to commit espionage or similar offences. The film buys into the current US government position that journalists and publishers can be prosecuted as co-conspirators alongside their alleged sources.

“This is a dangerous proposition for all journalists and media organizations, not just WikiLeaks. In the context of the US government’s attempts to prosecute journalists who communicate with confidential sources, Gibney’s film could have been an important and timely project. The film barely touches on the US investigation against WikiLeaks, never mentions the words ‘grand jury’, and trivializes the larger issues, perhaps because the film-maker could not secure an interview with Julian Assange?”

The film reports that Assange demanded millions of dollars for an interview, his way, no doubt, of mocking the big bucks behind the production. He knew they wanted the big confrontational Q&A and wouldn’t give it them! He says there are two more Wikleaks films on the way that he has cooperated with.

I have been impressed with Alex Gibney’s work. He is a talented pro, and this film is worth seeing (and dissecting). I also admire the daring of Manning and Assange who are faulted for being paranoid, but, given the propaganda and legal broadsides launched against them, you can understand why.

Remember when the U.S. government sent thugs to break into Vietnam whistleblower Daniel Ellsberg’s psychiatrist’s office looking for ways to discredit him? Making your whistleblowers appear weird and crazy is an old technique used by the powerful against those who question power.

Kafka couldn’t have come up with a more byzantine legal process than the one that Manning faces. (Military justice is said be for justice what military bands are for music.) There are, for example, no official transcripts of the legal proceedings available. Prominent journalists are calling for more access and transparency. And while having Assange taking refuge in the Ecuador Embassy in London seems absurd, it is also a sign that there are people worldwide who respect and admire the work that Wikileaks does!

“We Steal Secrets” is now a high-profile part of the media war that Wikileaks is fighting, a war that has often put whistleblower group at odds with the press whose freedom it champions. That press insists their way is the only way and is in the business of marginalizing dissidents.

So, first, there were the newspapers which initially rejected the secrets of government abuse and then used Wikileaks, before repudiating Assange as not a “real journalist,” as they apparently believe themselves to be. Then, they collectively and arrogantly turned on him en masse. Now, documentaries have become part of this contested terrain.

News Dissector Danny Schechter edits Mediachannel.org and blogs at news dissector.net.  He is also an independent filmmaker.  Comments to dissector@mediachannel.org.

9 comments for “A New Front in War on Wikileaks”