Presidents have been stretching their commander-in-chief powers since Thomas Jefferson dispatched the Navy to make war on the Barbary pirates. But Congress risks a perpetual war of presidential choice if it carelessly rewrites the 9/11 force-authorization act, warns Independent Institute’s Ivan Eland.

A move is afoot in Congress to change the 2001 law that kicked off what became the “war on terror” (although the Obama administration has dropped the now politically incorrect term). The administration, however, opposes changing the statute, because, as one Pentagon official said, “As of right now, it suits us well.”

Naturally the administration would take this position, since it has gotten away with vastly exceeding the mandate of Congress, thus running not so secret unauthorized drone wars in far-flung places. The administration and other proponents of the “war on terror” seem to fear that any replacement statute could restrict the administration’s wide-ranging claims of authority. Civil liberties advocates also oppose changing the law, because they fear any new congressional authorization would enshrine perpetual war. 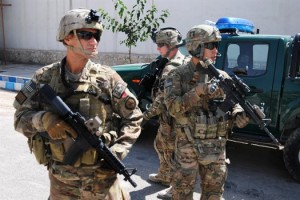 U.S. military officers and soldiers arrive at the site of a meeting with the provincial governor and other local leaders in Farah City, Afghanistan, May 22, 2013. (U.S. Navy photo by Lt. j.g. Matthew Stroup)

Other proponents of the “war on terror,” such as the ever-hawkish Sen. John McCain, R-Arizona, are driving the movement for change and rightfully fear that the legal basis for the wide-ranging war has been undermined. Actually, the legal authority for a broader war never existed.

As long as “national security” is invoked, apparently presidents can operate outside very clearly written statutes. The Authorization for Use of Military Force (AUMF) passed by Congress in the wake of the 9/11 attacks specifically states only:

Thus, the congressional authorization would allow the chief executive to use military force anywhere in the world against the main al-Qaeda group, which perpetrated the 9/11 attacks, and the Afghan Taliban, which ran Afghanistan at the time and had harbored the group.

However, as the main al-Qaeda group was neutralized, the George W. Bush and Obama administrations widened the war on terror by conducting drone wars against “associated forces” of al-Qaeda in Yemen (al-Qaeda in the Arabian Peninsula), Somalia (al-Shabaab), and Pakistan (the Pakistani Taliban). These groups share al-Qaeda’s worldview, but have goals that are more locally oriented and had nothing to do with the 9/11 attacks.

As Sen. Angus King, Independent-Maine, correctly noted in recent congressional hearings, “associated forces” are nowhere to be found in the 2001 law. Sen. Carl Levin, D-Michigan, however, agreed with the administration and argued the authorization automatically extended the war to other groups who allied with al-Qaeda and “joined the fight against us.”

Again, the statute does not say that, and most of these groups didn’t attack American targets until the United States intervened in the countries these groups frequent (that is, the United States has needlessly made new enemies). In fact, the Pakistani Taliban and al-Shabaab didn’t even exist on Sept. 11, 2001.

In the original 2001 AUMF, Congress declined the George W. Bush administration’s desire to include this indefinite detention provision. The statute that was enacted deals only with the employment of U.S. armed forces against those who perpetrated the 9/11 attacks. Therefore, how valid is one Congress’s interpretation of the intentions of a previous Congress?

In addition, even if the indefinite provision were valid and constitutional, a dubious proposition since Congress, according to the Constitution, can suspend habeas corpus rights (and therefore detain suspects indefinitely) only in time of rebellion or invasion, the provision didn’t authorize drone wars against associated groups.

Unfortunately, even if the law is not changed, civil liberties groups already have a perpetual war on their hands despite the decimation of the main al-Qaeda group. Congress, fearing to be seen as weak on terrorism, is unlikely to repeal the AUMF.

Thus, the best that can be hoped for is to retain the existing law, with strict enforcement of its limited authorization. In that way, the president could continue the war against al-Qaeda-main and the Afghan Taliban, but Congress should force him to desist in making new enemies by conducting unauthorized drone wars against associated groups in Pakistan, Yemen and Somalia.