In assessing the consequences of the decade-plus “war on terror,” President Obama sought to place his continued — albeit more targeted — use of violence within the context of just-war principles, stressing self-defense and proportionality, a point that religious ethicist Daniel C. Maguire disputes.

In his address on terrorism and America’s counterterrorism policy, President Barack Obama invoked the “just war” theory to justify the continued use of assassination by drones as America’s increasingly favored war policy. The President and most Americans need schooling on just what the “just war theory” (JWT) is.

JWT lays out the tests that state-sponsored violence must pass to be deemed morally defensible. JWT has its roots in the first tentative moves in ancient Hebraic, Greek and Roman societies away from total obliteration of the enemy, its people and its land as the goal of war. It was and is an effort to put some limits on collective violence. 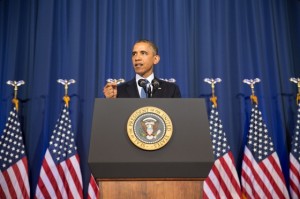 President Barack Obama delivers a speech at the National Defense University at Fort McNair in Washington, D.C., on May 23, 2013. (Official White House Photo by Pete Souza)

According to JWT, there are six tests a war must pass to claim some moral justification. If the war fails on any of the six, that war is immoral and the killing it involves is murder.

1. A Just Cause: As ethicist David Hollenbach writes: “The only just cause is defense against unjust attack.” Aggressive, imperial or preemptive wars fail this test and open the door to international barbarism.

Drone attacks that kill “suspected terrorists” based not on due process proceedings but on “intelligence” agencies, do not pass this initial test. Those are the same agencies that gave us the fictional weapons of mass destruction in Saddam’s Iraq resulting in a decade of unjustified slaughter and havoc.

2. Declaration by Competent Authority:  For the United States, proper declaration is defined in Article One, Section 8 of the U.S. Constitution which says that it is the prerogative of Congress “to declare war” and to “provide for the common Defence.” James Madison said that “in no part of the Constitution is more wisdom to be found than in the clause which confides the question of war and peace to the legislature and not to the executive department.”

The United States has not obeyed this part of the Constitution since December 1941. The constitutional requirement was alluded to at the onset of the Korean War but bypassed ever since.  Instead Congress surrenders its right to declare war by giving blank check authorization to the president (whether Lyndon Johnson or George W. Bush) to go to war if he, in his royal wisdom, chooses to do so.

When President Bush was given authorization to use “force” after the 9/11 attacks, the decision to use kill-power was seen as entirely his and the wisdom of the Constitution was trashed. President Obama’s drone policy sending unmanned aircraft around the world to kill people continues to rely on this congressional abdication of responsibility.

The United States further defined proper declaration of war when it helped to draft and signed on to the United Nations Charter. As Richard Falk writes, that historic document outlawed state vigilantism and entrusted “the Security Council with administering a prohibition of recourse to international force (Article 2, Section 4) by states except in circumstances of self-defense, which  itself was restricted to response to a prior ‘armed attack’ (Article 51) and only then until the Security Council had the chance to review the claim.”

This is called “the policing paradigm” and it would put upon states the communitarian and legal restraints imposed on use of violence by police and would also serve as a deterrent since to attack one was to attack all.

Briefing Congress before, or more often, after using state-sponsored drone violence mocks the right and abandoned duty of Congress to declare war. So does ignoring the UN Security Council.

3. Right Intention: This requirement of JWT involves honesty about the real reason for the violence and avoidance of excessive secrecy. It does not hide the truth and suppress the vox populi. It also does not substitute force for due process.

4. Non-combatant immunity: Drone warfare involves long-distance killing by remote control. It is disingenuous to say that drone usage honors non-combatant immunity. The targeted individual will rarely be found alone. The loose definition of who is and who is not a “militant” further belies the claims of sensitivity to civilian casualties.

5. Last Resort: Totally missing from President Obama’s May 23 address was the question why? Why do these targeted people hate us but don’t hate Sweden or Japan or Brazil. Why is killing them the answer when there has been little or no consideration of the grievances that lead them to engage in suicide attacks to hurt us?

Are we not stupidly striking at the bitter fruit of the tree while still nourishing its roots and thus guaranteeing more bitter fruit? If war is to be the last resort, shouldn’t we first ask what legitimate grievances animate the animosity toward our nation?

American economic supremacy has played a big part in producing a world where 82 percent of the world’s income goes to the top 20 percent, leaving the rest to face hardship or starvation. Our paltry foreign aid does little to alleviate world poverty and the world knows that.

Our financial, political and military support for Israeli expansionism and militarism make us no friends in the Middle East or elsewhere in the world. It is also not good for Israel or for us to be Israel’s ever deferential enabler. Friends do not let friends drive off a cliff and Israel is doing just that by having started the nuclear arms race in the Middle East and with its policy of occupation and expansionism. It’s not friendly of us to keep paying for that.

In the Suez crisis of 1956, when President Dwight Eisenhower threatened cutback of aid if Israel did not retreat from its expansionism, Israeli officials agreed to retreat. When George H. W. Bush did the same in 1989 regarding settlements in Palestinian territory, the Israeli government again stopped, only to restart at the end of his term.

Tony Judt has called us Israel’s “paymaster.”  When the paymaster makes demands not feeble entreaties the recipients listen.

6. Proportionality: War must do more good than harm, a proviso that is increasingly infeasible given the advances in weaponry. When drones are causing constant fear and dread for Pakistani children and their parents, are those elusive demons in the sky doing more good than harm? What good do we envision when we export terror into other nations’ homes?

Is it not past time to realize that our kill-power is not making us safe but sowing fear and enmity? In regard to that recognition, Obama’s May 23 speech is not reassuring.

Is American genius not up to the challenge of sensitive diplomacy, the kind that does not love its enemies but strains to understand their grievances? Are our fingers grown too rough with bludgeoning to undertake the needlepoint of peace-making diplomacy? Much of the world seems to think so.

Daniel C. Maguire, a professor of religious ethics at Marquette University, is author of The Horrors We Bless: Rethinking the Just-War Legacy, Fortress Press.