President Obama offered a comprehensive review of U.S. counterterrorism policies since 9/11, while vowing to ratchet down the violence and acknowledging harm done to America’s principles and image. Still, many details of his plans remain fuzzy and follow-through far from certain, says ex-CIA analyst Paul R. Pillar.

In his speech at the National Defense University on Thursday, President Obama made one of the most sensible, realistic, thorough and truthful statements about terrorism and counterterrorism from any senior official, let alone a president.

The speech was not a piece of oratorical artwork, and it probably will not have the popular resonance of many of his other utterances. But in the sheer quality of its substance, the speech was one of his best. 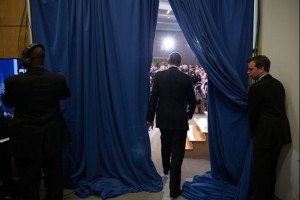 President Barack Obama prepares to take the stage as he is introduced at the National Defense University at Fort McNair in Washington, D.C., May 23, 2013. (Official White House Photo by Pete Souza)

The welcome and needed main message was that the United States must and should get off the track of waging a “boundless ‘global war on terror.’” Accompanying that message was an accurate description of the terrorist threats that do and do not endanger U.S. interests.

The President explained how the main problem is not what is left of the core al-Qaeda group but instead some parts of an assortment of foreign offshoots as well as radicalized individuals in the United States. Many of the foreign groups, including some that have adopted the al-Qaeda brand name, are primarily focused on local matters and do not pose any significant threat to U.S. interests.

Mr. Obama was candid in what can and cannot be done in countering terrorism. We “cannot erase” violent extremism. He talked of some of the vulnerabilities that are unavoidable, including the dangers faced by U.S. diplomats serving in trouble-prone places such as Libya.

The President, in multiple ways, made clear the inherent trade-offs involved in many aspects of counterterrorist policy. This included his discussion of the pros and cons of establishing either a special court or an oversight board to pass judgment on proposed drone strikes against terrorist suspects, while evidently remaining open-minded himself about the different options.

It also included his reference to the need to strike a balance between security and “preserving those freedoms that make us who we are.” This aspect of the speech was a needed antidote to the tendency to think about counterterrorism in absolute terms and doing whatever is necessary to provide security.

A needed antidote to the tendency to think of a “war” on terrorism involving military force as a first-choice tool was Mr. Obama’s reference to the many different instruments of statecraft that contribute to counterterrorism even if they are not labeled expressly as such.

Especially welcome was his forthright discussion of the need to address “underlying grievances and conflicts that feed extremism.” He included under this category the promotion of democracy, foreign assistance, and, of particular note, the establishment of an Israeli-Palestinian peace.

What the President said about the detention facility at Guantanamo was admirably blunt and indicated a welcome use of what executive authorities he has to get closer to the goal of closure. He discussed how the original purpose of the facility was to keep detainees beyond the reach of any law and how this ignoble objective has hurt U.S. foreign relations by fostering a perception of U.S. disregard for law. He also correctly said that the congressional restrictions on movement from detainees out of Guantanamo “make no sense.”

The speech serves also as another refutation of the myth that Mr. Obama claims to have dealt a fatal blow to international terrorism. The myth seems to have been born during last year’s election campaign amid subliminal fears of Mr. Obama’s opponents that whatever successes his administration has had against terrorism might win him votes.

The myth has underlain the silliness about talking points on the Benghazi incident, allegedly doctored so as not to contradict the mythical claim about having defeated terrorism. It also underlies some more recent silliness about the White House supposedly wanting to “punish” the Associated Press for stories that indicate there is still a terrorist threat out there.

What the President actually said near the beginning of this week’s speech was, “Make no mistake, our nation is still threatened by terrorists.”

When he mentioned the raid that killed Osama bin Laden, he said nothing about his own decision-making but instead attributed the raid’s success to the planning and professionalism of U.S. Special Forces and to “some luck.” Even then, he acknowledged the downside of the raid in the form of a “severe” negative impact on relations with Pakistan.

The speech does implicitly remind the listener of some of the negative aspects of the Obama administration’s use of armed drones. One of those aspects is unnecessary opacity and slowness in lifting that opacity. It was only the day before the speech that the administration, in a letter from the Attorney General to a Senate committee, finally acknowledged all of the U.S. citizens who had been killed, intentionally or otherwise, by drones.

The White House released, as an accompaniment to the speech, a fact sheet describing criteria and procedures to be used in deciding on additional strikes from armed drones. The release is a positive step toward more transparency and gives us the fullest sense yet about the policy and how it is implemented.

But the complete policy guidelines remain classified, the fact sheet is vague on several points, and it raises as well as answers questions. For example, it states that the United States will use lethal force only against a target that poses a “continuing, imminent threat” to U.S. persons. How can a threat that is “continuing” also be “imminent,” except perhaps for a short time before the threat is finally executed?

In other places, such as in describing review procedures when a U.S. citizen is involved, the fact sheet essentially says that things will be done legally without specifying the legal principles and standards to be applied. In offering assurances that noncombatants will be protected, a lengthy footnote says that “it is not the case that all military-aged males in the vicinity of a target are deemed to be combatants” but doesn’t really eliminate the possibility that many such males will be so deemed.

The biggest hurdle to full implementation of a sensible and defensible counterterrorist policy is probably not these remaining problems in the administration’s use of drones but instead the insistence of others, especially in Congress, that counterterrorism is a “war” in which military force is the preeminent tool, the grievances and conflicts that feed extremism are disregarded, the trade-offs involved in buying security are brushed aside, and the stain of Guantanamo is retained.

5 comments for “Charting a New Course on Terrorism”