That Jackie Robinson and Branch Rickey were Republicans when they shattered baseball’s color barrier in 1947 is only surprising if you consider the changed GOP after its Southern Strategy and unsubtle appeals to racism, leading to demonizing the first black president. But there was this other principled GOP, says Independent Institute’s Jonathan Bean.

If history were written without bias, we would mark the beginning of the U.S. civil rights movement as 1947: the year Jackie Robinson, the subject of the popular new movie, 42, broke major league baseball’s “color barrier.”

Filmed under the working title, “Mr. Rickey and Mr. Robinson,” 42tells the story of two highly religious Republicans, one white and one black, who had the courage to change American society. Unfortunately, the movie ignores both the religious convictions and political views of baseball owner Branch Rickey, a white lawyer from Ohio, and Brooklyn Dodgers first-baseman Jackie Robinson, a black athlete from Cairo, Ga. Yet, their religious and political beliefs are crucial to the story. 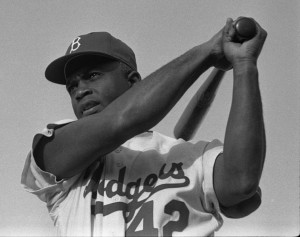 Jackie Robinson in 1954. (Photo by Bob Sandberg, Look photographer, via Library of Congress)

Remember, the year was 1947: the year before President Harry Truman ordered the military desegregated; seven years before the U.S. Supreme Court’s Brown v. Board of Education decision; eight years before Rosa Parks refused to give up her seat on a Montgomery, Ala., public transit bus; 10 years before President Dwight Eisenhower utilized the 101st Airborne to enable the Little Rock Nine to attend Central High School; 16 years before Martin Luther King, Jr. gave his memorable I Have A Dream speech at the Lincoln Memorial during the 1963 March on Washington; and nearly two decades before the Civil Rights Act of 1964 and the Voting Rights Act of 1965 were adopted.

The times were not yet “a changing,” and Rickey and Robinson had little more than their beliefs to sustain them.

Rickey’s story begins in 1903 when, as a 22-year-old head coach, he took his Ohio Wesleyan University baseball team to South Bend, Ind., to play Notre Dame. When the team arrived at the old Oliver Hotel to check in, the hotel manager reportedly told Rickey, “I have rooms for all of you except for him”,pointing to catcher Charles Thomas, who was black.

“Why don’t you have a room for him?” Rickey asked.

“Because our policy is whites only,” the manager replied.

After some back-and-forth, the hotel manager agreed to let Thomas stay there: in Rickey’s room.

Rickey sent his players to their rooms. When he got to his room, Thomas was sitting on a chair sobbing, pulling at his hands.

Despite this early trauma, Rickey never saw politics as a cure for racial hatred and discrimination. In fact, with Jim Crow laws still in place throughout the South,and more subtle forms of discrimination institutionalized in many northern cities,politics was part of the problem, not the solution.

The solution, Rickey believed, had two components: the heart and the wallet, religion and free enterprise.

After a long run as general manager of the St. Louis Cardinals, whose home city was largely still segregated, Rickey left for New York, where he became part owner of the Dodgers. As an owner he had the power to do as he pleased. And what he pleased was to right the wrong that had been inflicted on Charles Thomas and so many other talented blacks over the years.

He was joined in this effort by another highly religious Republican: Jack Roosevelt (“Jackie”) Robinson, who had competed in four sports at UCLA before World War II interrupted things, and was then playing for the Kansas City Monarchs in the segregated Negro Leagues. This was a time when many blacks were Republicans.

An independent-minded, life-long Republican, Robinson explained his political views in a chapter, titled “On Being Black Among the Republicans,” in his autobiography, I Never Had It Made.

In short, Robinson supported those Republicans, such as Nelson Rockefeller and Jacob Javits, who championed civil rights, and opposed those in the GOP who ignored black concerns. Thus, in 1960 Robinson campaigned for Richard Nixon in his losing race against John F. Kennedy, citing Nixon’s support for the 1957 Civil Rights Act, which Kennedy and many other Democrats opposed. And in 1964, Robinson served as deputy national director of the Rockefeller for President campaign, as he had earlier served in Rockefeller’s gubernatorial races. When Barry Goldwater won the nomination,and ignored Robinson,he became a political independent.

This should have served as an early lesson for the GOP. When a staunch Republican like Jackie Robinson loses faith, it should have raised a red flag about their relationship with the black community. Today’s GOP, which continues to be perceived as an enemy of civil rights, would do well to recall the Robinson story.

But Robinson and Rickey had more faith in free economics than fair-weather politicians of either party. By hiring Robinson, Rickey engaged in the essence of capitalism: “creative destruction.” In this case, the creation of color-blind sports and the destruction of segregated baseball.

Our cynical age thinks that religious motives are “cheesy,” as one reviewer put it, and that capitalism is evil. But Rickey and Robinson,devout Methodists both,didn’t think so.

They believed that people should be judged on their merits, as God intended, not by the color of their skin. They also believed that capitalism, not government, held the key to equal opportunity. And together they practiced what they preached.

Jonathan Bean is a   Research Fellow at the Independent Institute, Professor of History at   Southern Illinois University, and editor of the Institute book, Race and Liberty in America: The Essential Reader.

← The Scandal of Lax Government
The Delicate Balance of Leaking →

6 comments for “The Jackie Robinson Republicans”