Before his execution by hanging in 1947, Auschwitz commander Rudolf Hoess confessed to his role in the industrialized slaughter of millions of Jews and other “enemies” of Hitler’s Third Reich. But Hoess’s guilt while extraordinary in its numbers extends to all leaders who carelessly choose war, Gary G. Kohls observes.

The ending of my last column was the powerful Thomas Merton prose poem that gave voice to the infamous international war criminal, the Commandant of Auschwitz, Rudolf Hoess. Merton has Hoess speaking from the gallows with a haunting accusation directed at history’s pro-war presidents, monarchs, dictators, prime ministers and assorted politicians who know that wars always involve the mass murder of defenseless civilians (euphemistically known as “collateral damage”).

The self-admitted war criminal Hoess accuses of war crimes every commanding officer who has ever ordered lethal bombings or artillery attacks that inevitably involve innocent non-combatants. That also would apply in modern times to the U.S. policy of extra-judicial assassinations of suspected “terrorists” by drone warfare as well as to every Apache helicopter crew (and their commanders) who targeted “suspects” in Iraq and Afghanistan. [See the horrifying war crime “collateral murder” video courageously made available to the public by Bradley Manning and WikiLeaks at: http://www.youtube.com/watch?v=5rXPrfnU3G0.] 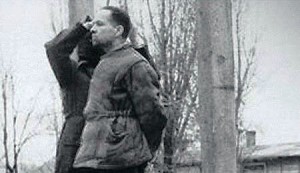 Former Auschwitz commander Rudolf Hoess in 1947 as he is readied for execution on gallows constructed near the death camp’s crematorium.

Hoess seems to be accusing every combat platoon that has ever blindly participated in night raids or mortar attacks in areas where civilians are known to be present. Merton has Hoess say, “Do not think yourself better because you burn friends and enemies with long-range missiles without ever seeing what you have done.”

Merton also accuses the war-profiteering industrialists that bid for the jobs of designing, manufacturing and equipping the camps with increasingly efficient extermination machinery. German ingenuity in action.

Merton’s poem contains actual quotes from some of the documents that were found after World War II had ended. The innovative SS Lt. Col. Hoess was proud of and well rewarded for – his part in improving the craft of high-tech, industrial-strength mass murder.

He said: “Another improvement we made over Treblinka was that we built our gas chamber to accommodate 2,000 people at one time whereas at Treblinka their 10 gas chambers only accommodated 200 people each.

“The way we selected our victims was as follows: We had two SS doctors on duty at Auschwitz to examine the incoming transports of prisoners. The prisoners would be marched by one of the doctors who would make spot decisions as they walked by. Those who were fit for work were sent into the camp. Others were sent immediately to the extermination plants. Children of tender years were invariably exterminated since by reason of their youth they were unable to work.

“Still another improvement we made over Treblinka was that at Treblinka the victims almost always knew that they were to be exterminated and at Auschwitz we endeavored to fool the victims into thinking that they were to go through a delousing process. Of course, frequently they realized our true intentions and we sometimes had riots and difficulties due to that fact.

“Very frequently women would hide their children under the clothes, but of course when we found them we would send the children in to be exterminated. We were required to carry out these exterminations in secrecy but of course the foul and nauseating stench from the continuous burning of bodies permeated the entire area and all of the people living in the surrounding communities knew that exterminations were going on at Auschwitz.”

Hoess and others among the Nazi hierarchy had noticed the terrible psychiatric toll (alcoholism, depression, suicide, etc) that the up-close and personal massacres were having on the common soldiers who reflexively obeyed the illegal orders to kill noncombatants. The decidedly less personal killing methods of starvation, shellings, bombings and gassing was far less traumatizing to the soldiers who were there at the end of the chain of command.

Hoess was hanged in 1947 for his role in the deaths of 3 million people at Auschwitz during his 3½ years (May 1940 to December 1943) as the camp’s commandant. In a postwar affidavit (April 1946), Hoess confesses to his crimes:

“I commanded Auschwitz until 1 December 1943, and estimate that at least 2,500,000 victims were executed and exterminated there by gassing and burning, and at least another half million succumbed to starvation and disease, making a total dead of about 3,000,000. This figure represents about 70% or 80% of all persons sent to Auschwitz as prisoners, the remainder having been selected and used for slave labor in the concentration camp industries.

“Included among the executed and burnt were approximately 20,000 Russian prisoners of war (previously screened out of Prisoner of War cages by the Gestapo) who were delivered at Auschwitz in Wehrmacht transports operated by regular Wehrmacht officers and men. The remainder of the total number of victims included about 100,000 German Jews, and great numbers of citizens (mostly Jewish) from Holland, France, Belgium, Poland, Hungary, Czechoslovakia, Greece, or other countries. We executed about 400,000 Hungarian Jews alone at Auschwitz in the summer of 1944.

“It took from 3 to 15 minutes to kill the people in the death chamber depending upon climatic conditions. We knew when the people were dead because their screaming stopped.

“These so-called ill-treatments and this torturing in concentration camps, stories of which were spread everywhere among the people, and later by the prisoners that were liberated by the occupying armies, were not, as assumed, inflicted methodically, but were excesses committed by individual leaders, sub-leaders, and men who laid violent hands on internees.”

In his autobiography, written while he was awaiting his war crimes trial, Hoess wrote: “I want to emphasize that I personally never hated the Jews. I considered them to be the enemy of our nation. However, that was precisely the reason to treat them the same way as the other prisoners. Besides, the feeling of hatred is not in me. It is tragic that, although I was by nature gentle, good-natured, and very helpful, I became the greatest destroyer of human beings who carried out every order to exterminate people no matter what.”

The Willingness to Kill

One has to ask out loud, given the fact that Germany was an overwhelmingly Christian nation: What kind of Christianity was it that justified, contrary to the teachings of Jesus, cruelty in parenting, hateful attitudes toward the “other,” and the justification of the organized mass slaughter of war? What kind of Christian leadership was it that did not stand up and courageously and prophetically say “NO” to its nation’s manufacture and stockpiling of (and its willingness to use) weapons of mass destruction whose only purpose is to kill humans and scorch the earth?

From where in the human soul comes the willingness to kill, wound, torture, enslave or starve another human or even cooperate with the evils of state-sponsored homicide or genocide, whether your militarized nation is fascist Germany or “democratic” America?

Harshness in childrearing is one of the realities that can easily result in the willingness to obey illegal orders to kill. Rudolf Hoess was a victim of cruelty in childrearing, a violent, xenophobic culture, a vicious anti-Semitism and an aberrant form of Christianity that was silent on or supportive of its militaristic nation’s glorification of war.

Being a part of the inhumane society that Hoess was raised in, he never had a chance to be all that he could have been. He was hanged on April 16, 1947, at the age of 45 on a gallows built near the Auschwitz death camp’s crematorium in Poland.

15 comments for “The Long Shadow of Auschwitz”