Exclusive: Black flags of Islamic extremism are flying over “liberated” zones in Syria as hard-line fundamentalists take control of the uprising. Yet, Official Washington continues to demand the overthrow of the secular Assad regime, rather than consider a power-sharing compromise, Robert Parry reports.

For several years now, President Barack Obama has resisted demands from neocons, Republicans and hawkish Democrats that he intervene militarily in Iran and Syria, but he also has failed to negotiate seriously with those two governments, thus making a drift toward war more likely.

In 2012, there appeared to be a chance for a breakthrough both in talks with Iran over its nuclear program and with Syria’s Assad regime over a power-sharing arrangement with the country’s disaffected Sunni majority. Some people involved in those initiatives thought that after the U.S. election, a victorious Obama would have the political space to make concessions as well as demands. Then, when nothing happened, some thought he was waiting to install a new national security team and didn’t want to risk Senate obstruction of his nominations. 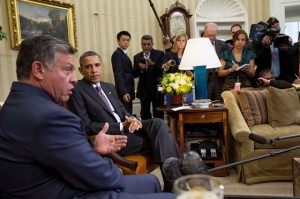 President Barack Obama and King Abdullah II of Jordan make statements to the press prior to a bilateral meeting, in the Oval Office, April 26, 2013. (Official White House Photo by Pete Souza)

However, now it looks as if Obama simply has reverted to a more traditional (or default) foreign policy approach to the Middle East shuttle diplomacy by Secretary of State John Kerry regarding the Palestinian-Israeli conflict and provision of more military aid to “allies” through Defense Secretary Chuck Hagel.

So, 2013 could represent another lost opportunity, when the United States turned its back on creative strategies that could deliver peace and thus risked a drift toward war. Something similar occurred in 1989 when President George H.W. Bush rebuffed a proposal from Soviet President Mikhail Gorbachev for a power-sharing arrangement to bring the brutal Afghan civil war to an end.

Instead of working with Gorbachev, Bush listened to deputy national security adviser Robert Gates and other hardliners who believed, incorrectly, that the CIA-backed Afghan mujahedeen would quickly overthrow Najibullah’s communist regime in Kabul after the Soviets withdrew the last of their troops in February 1989.

Najibullah was far from an ideal negotiating partner, but his government was secular, had a workable bureaucracy and advanced the rights of women. The mujahedeen though touted by U.S. propaganda as “freedom-fighters” actually represented some of Afghanistan’s most reactionary elements, pushing a medievalist version of Islam, engaging in gruesome treatment of captives, and demanding the cruel subjugation of women.

The triumphalist choice by Bush and Gates, insisting on a clear-cut victory by the Muj over the Soviet-backed Najibullah, proved disastrous in a variety of ways: first, the mujahedeen failed to win on the expected Bush-Gates timetable; second, their cause degenerated into mindless brutality; third, the chaos opened the door to the Taliban, which took power in 1996 (and then murdered Najibullah); and fourth, a pathway was cleared for al-Qaeda to use Afghanistan as a base for terrorism. [For details, see Robert Parry’s America’s Stolen Narrative.]

A similar dilemma confronts Obama in 2013, with the neocons and many other pundits hectoring him to intervene militarily to overthrow the secular regime of Bashar al-Assad, who generally represents Syrian minorities, including his own Alawite religion (an offshoot of Shiite Islam) and Christians from the Armenian diaspora.

Assad’s principal opponents are from Syria’s majority Sunni community which resents the favoritism toward the Alawites and other minorities. However, as the Sunni uprising gained strength over the past two years, radical Islamist groups emerged as the most effective fighters and now dominate rebel-controlled territory.

This radicalization of the Sunni uprising can be traced to the Islamist tendencies of its chief benefactors, especially Saudi Arabia’s fundamentalist Sunni monarchy, which played a comparable role when it funneled hundreds of millions of dollars in military aid, through Pakistan, to the most right-wing elements of the Afghan mujahedeen.

Today, the Saudis are supplying weapons to hard-line Syrian rebels, via Turkey and Jordan, with comparable results, spurring a fight-to-the-death between Assad’s repressive secularists and the murderous Sunni fundamentalists. This reality was highlighted by the New York Times on Sunday, reporting the spread of Islamist rule across “liberated” sectors of Syria.

“Across Syria, rebel-held areas are dotted with Islamic courts staffed by lawyers and clerics, and by fighting brigades led by extremists,” wrote Times correspondent Ben Hubbard. “Even the Supreme Military Council, the umbrella rebel organization whose formation the West had hoped would sideline radical groups, is stocked with commanders who want to infuse Islamic law into a future Syrian government.

“Nowhere in rebel-controlled Syria is there a secular fighting force to speak of.”

With the black flags of Islamic extremism flying across rebel-held parts of Syria and with no matching militancy among the anti-Assad secularists the West can expect that the overthrow of Assad will lead to either the sort of violent chaos that enveloped Libya after the ouster and murder of Muammar Gaddafi or perhaps worse an Afghan-style outcome with Islamists allied with al-Qaeda in the heart of the Middle East.

Given those prospects, the best-of-the-bad solutions might be to work with the Russians and even the Iranians to negotiate a power-sharing coalition between Assad’s group and the more moderate Sunni factions. That, however, might require concessions from Obama and other Western leaders who have demanded Assad’s removal.

Obama faces intense opposition in Official Washington toward any concessions on Syria or Iran. The pundits from Fox News to the neocon Washington Post to some hosts on liberal MSNBC are clamoring for action. They complain that Obama should have intervened militarily much sooner and now after reports that Syria may have used chemical weapons in a limited fashion Obama has no choice but to take aggressive action.

Virtually no one will countenance a counter-narrative that Obama’s big mistake was in not pressing for a negotiated solution two years ago. Back then, Washington’s conventional wisdom was that the Syrian uprising had to be supported, that Assad had to go, and that any idea of compromise had to be rejected. As in 1989 with Afghanistan, triumphalism prevailed regarding Syria.

So, facing a difficult reelection in 2012, Obama finessed the Syrian issue. Yet, even after he won a second term, he has remained frozen in inaction. Now it looks as if he is simply dragging his feet as he is pushed and pulled toward another disastrous Mideast war.