In recent years, the Republican obsession with slashing the federal budget even at a time of high unemployment rested on the intellectual foundation of a study purporting to prove that government debt strangled economic growth. But that foundation crumbled when a computation error was revealed, as Beverly Bandler explains.

Regarding the Austerity Scandal, I wonder if you are as angry as you should be. I am outraged. This is indeed a significant story that the corporate mainstream media appears to be ignoring.

One reader tells me that he has the impression that the Reinhart-Rogoff scandal has not been widely reported. He says Jon Stewart had Thomas Herndon on his program. Herndon is the graduate economics student who revealed the flaw in the R&R data. Herndon said the error in Reinhart-Rogoff’s spreadsheet was so blatant that it was spotted by his girlfriend, a sociology student. (I don’t like to use exclamation points, but this deserves a couple: !!) 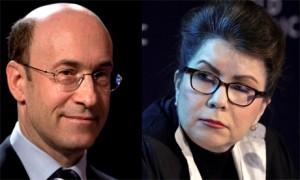 This scandal is important because the economic theory presented by Carmen Reinhart and Ken Rogoff was central to the Republican-led demands for sharp austerity even at the cost of continued high and painful unemployment. The two economists claimed that their data proved that government debt equal to 90 percent of GDP would strangle the economy, thus justifying extreme steps to bring the debt down immediately.

However, other economic studies of the same question came up with dramatically different results, showing continued GDP growth at that level of debt. Finally, Reinhart and Rogoff made their data available to a team at the University of Massachusetts at Amherst and the mystery was solved. The two economists had made an obvious computation error. In other words, the austerity hysteria that had fueled Republican insistence on slashing spending was driven by a botched economic analysis.

The Washington elite had made major economic policy decisions that have affected every single American based on a single paper that had errors so blatant that the mistakes were spotted by a sociology student? The elite policymakers then ignored all the reliable economics work of practically every reputable economist in the nation who questioned the Reinhart-Rogoff study?

Would you want a surgeon to do your brain surgery based on one new technique that had never been vetted and was seriously questioned by other surgeons, including some of the best in the field? But that is how the Republicans and some “deficit hawk” Democrats slashed spending and killed proposals to invest in infrastructure, fund research and rehire laid-off police, firefighters and teachers. God help us!

Not only political “elites,” but financial elites bought into the one paper. Bill Gross, manager of the world’s largest bond fund for PIMCO, in 2010 “warned that UK debt levels were too high, leaving gilts ‘resting on a bed of nitroglycerine,’” basing his warning on the widely cited R&R paper now under fire for “possible statistical errors.”

Gross has changed his tune: he is now criticizing efforts by Britain and much of the Euro Zone to cut debt rapidly with severe austerity measures, warning that such action risks stifling recovery. “The UK and almost all of Europe have erred in terms of believing that austerity, fiscal austerity in the short term is the way to produce real growth,” he stated to the Financial Times, “It is not. You’ve got to spend money.”

Slate business and economics correspondent Matthew Iglesias writes “the academic research bolstering the austerity drive was confused, at best.” It is important to remember that the “academic research” to which he refers was one paper, one research study.

Does this mean the political and financial elites have never read the economic history of the Depression? Updated and related empirical studies of same? That they have never read Paul Krugman, Christina Romer, Joseph E. Stiglitz and a host of other prominent economists and instead chose to embrace one paper “as gospel,” not vetting it, not reading the responses to the paper from other economists when it shot out of the gate?

Beverly Bandler’s public affairs career spans some 40 years. Her credentials include serving as president of the state-level League of Women Voters of the Virgin Islands and extensive public education efforts in the Washington, D.C. area for 16  years. She writes from Mexico.

← Recalling the Crimes of Inhumanity
Bush’s Bloody Legacy in Iraq →

9 comments for “The Bad Math Behind Austerity”