The Boston Marathon bombings have dominated U.S. news for the past week, prompting fresh calls for ignoring constitutional protections in the face of “Islamic terrorism.” But the reality is that politically motivated violence has declined in America over recent years, notes Lawrence Davidson.

Americans may assume that public insecurity is a condition you find under dictatorships, where the agents of the state can burst through your door and cart you away without a warrant. That can now happen in the USA too, but only to those the government calls “terrorists.”

Perhaps naively, ordinary folks see themselves as immune from that sort of treatment. However, public insecurity has many roots. Americans actually experience, but almost never acknowledge, the fact that there is a correlation between U.S. democracy’s relatively broad array of freedoms and public high anxiety. Here are some of the ways this works: 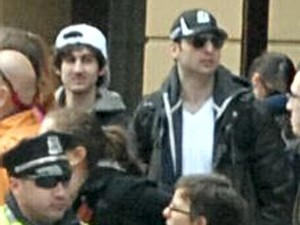 A photo released by the FBI showing the suspected Boston Marathon bombers, later identified as the Tsarnaev brothers.

–Economic freedom can, theoretically, break down class barriers and open up opportunities for enterprising citizens. It also leaves you free to become abjectly poor and produces a socio-political environment in which ideologically driven leaders hesitate to use the power of the state to solve the consequences of poverty. Being poor is, usually, a high-anxiety state.

–Political freedoms can become lopsided in favor of well-organized special interests with the financial ability to corrupt the political system. It might be that 90 percent or more of Americans favor reform of the gun laws and would feel safer if there were universal background checks on those purchasing firearms. It does not matter, though, because this majority does not know how to effectively use its political freedom to achieve this end.

As a consequence lobby groups that specialize in working the system (such as the National Rifle Association) can easily override the wishes of the majority and, as just happened, arrange for the most innocuous of gun reform legislation to be defeated in the Senate. Moved by the same lobby influence, the Senate is expected to reject the recently created UN Arms Trade Treaty. Thus the rest of us, and our children, are stuck in a situation that is very free for gun owners who can give their fantasies full play, but spells high anxiety for the rest of us.

–Media freedom, such as it is, is perhaps the greatest contributor to public insecurity because it has produced a consistent concentration on the negative. This occurs because either those who own the media outlets, and thus literally select the news we receive, hold an anxiety-producing worldview, or they see such an approach as good business. The spectacularly negative seems to sell newspapers and boost ratings.

At this point, one can ask who are most inclined to use freedom to promote practices and policies that are anxiety producing to great majority? It is often rigid, single-issue protagonists who are anything but free in their own minds. In fact their single-mindedness has blinded them to broader community interests and needs.

Take for instance, the Christian and Jewish ideologues making up such groups as Christians United for Israel and the American Israeli Public Affairs Committee (AIPAC). The former is a Christian Zionist organization which claims to be “the largest pro-Israel organization in the United States serving 1.3 million members.” AIPAC, of course, is one of the most influential lobby groups in the country.

And just how do these groups “serve” their constituents? Well, one way is by going around trying to convince the rest of us that we are in mortal danger from a nuclear Iran (which happens to be a country at odds with Israel). They have done a good job of implanting this anxiety-producing fantasy in the minds of the public, the media and many members of the U.S. Congress.

But how do I know the claim that Iran is seeking nuclear weapons is a fantasy? Because every time the heads of our government’s intelligence services are asked about this they say it isn’t true. Oddly, this gets very little press.

Such Zionist organizations also spread public insecurity through the promotion of Islamophobia, another fantasy which states that just about every Muslim in the U.S. is an al-Qaeda agent. As one friend of mine, Peter Loeb of Boston, has put it, “the word ‘terrorist’ has become equated with ‘Arab/Muslim’ in the American mind.”

Thus, in an early reference to the recent Boston Marathon bombing, ABC News reported that “the deadliest terror attack on U.S. soil since 9/11 has left many people anxious. But Muslim Americans await the identity of the perpetrator with particular dread.”

The recent anxiety that hit the nation over the Boston Marathon bombings is good example of just how exaggeratedly frightening a world our freedom (in this case media freedom) has created for us. If one bothers with the facts, one learns that “terrorist” attacks are not numerous in the U.S. and are in fact declining.

Most of them are not carried out by Muslims but by environmental and animal rights advocates. The Washington Post’s WonkBlog reported that the Earth Liberation Front and the Animal Liberation Front were “two of the most active groups since 1970, with 161 attacks total (and 84 since 2001). But they’ve killed zero people over the years , they mainly focus on setting fire to facilities, like SUV dealerships.”

Finally, U.S. law enforcement is getting better at dealing with these incidents. But all of this good news makes no impact in the face of something made into a major anxiety-producing national event by the media.

The Boston Marathon affair was carried out by two young immigrant brothers of Chechen ethnicity. The older brother, who was probably the leader in this escapade, appeared to be a disenchanted misfit. He was an aspiring and talented boxer who had his heart set on making the U.S. Olympic team. However, he learned that as a “foreign athlete” (he was not yet a citizen) he could not compete in the U.S. national championships.

He had come to feel that “there are no values anymore” and that “people can’t control themselves.” By the way, these are feelings that no devout Muslim would ever seriously entertain.

Unfortunately, freedom as practiced in the U.S. has its drawbacks. It has encouraged an often heartless individuality that disregards serious levels of poverty. It has allowed the evolution of interest group politics that often works against national interests in both domestic and foreign policies. And, in the guise of a free media, it has produced an environment that breeds exaggeration, fantasy and a general concentration on the most spectacular, and most negative, of news stories.

Does this make America’s freedoms, in principle, bad things? Not at all. But it does call attention to the fact that such freedoms, practiced unconditionally, can give free rein to the less communal and more selfish aspects of the human psyche. The result can be a form of negative blowback.

An intelligent, mature community will be aware of this fact and implement non-abusive regulations to assure that along with economic, political and media freedom comes responsible behavior. Alas, America as a society is not particularly intelligent or mature, so such reforms encouraging responsible behavior are unlikely.

The irony of it all is that it will be in the name of preserving freedom, in its peculiarly American radical individualistic form, that powerful elites and influential special interests will resist any effort to mandate the responsible use of those freedoms. As a consequence, high anxiety and freedom will continue to go along with each other.