Since the social upheavals of the Sixties, the American Establishment has sought to constrain critical thinking through a variety of techniques, from propaganda to government secrecy to the celebrated ignorance of Fox News. But there are broader societal pressures as well, notes Lawrence Davidson.

In 2008, Rick Shenkman, the Editor-in-Chief of the History News Network, published a book entitled Just How Stupid Are We? Facing the Truth about the American Voter. In it he demonstrated, among other things, that most Americans were: (1) ignorant about major international events, (2) knew little about how their own government runs and who runs it, (3) were nonetheless willing to accept government positions and policies even though a moderate amount of critical thought suggested they were bad for the country, and (4) were readily swayed by stereotyping, simplistic solutions, irrational fears and public relations babble.

Shenkman spent 256 pages documenting these claims, using a great number of polls and surveys from very reputable sources. Indeed, in the end it is hard to argue with his data. So, what can we say about this? 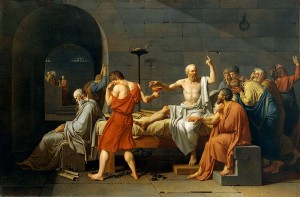 The Death of Socrates, as depicted in an 18th Century painting by Jacques-Louis David.

One thing that can be said is that this is not an abnormal state of affairs. As has been suggested in prior analyses, ignorance of non-local affairs (often leading to inaccurate assumptions, passive acceptance of authority, and illogical actions) is, in fact, a default position for any population.

To put it another way, the majority of any population will pay little or no attention to news stories or government actions that do not appear to impact their lives or the lives of close associates. If something non-local happens that is brought to their attention by the media, they will passively accept government explanations and simplistic solutions.

The primary issue is “does it impact my life?” If it does, people will pay attention. If it appears not to, they won’t pay attention. For instance, in Shenkman’s book unfavorable comparisons are sometimes made between Americans and Europeans. Americans often are said to be much more ignorant about world geography than are Europeans.

This might be, but it is, ironically, due to an accident of geography. Americans occupy a large subcontinent isolated by two oceans. Europeans are crowded into small contiguous countries that, until recently, repeatedly invaded each other as well as possessed overseas colonies.

Under these circumstances, a knowledge of geography, as well as paying attention to what is happening on the other side of the border, has more immediate relevance to the lives of those in Toulouse or Amsterdam than is the case for someone in Pittsburgh or Topeka. If conditions were reversed, Europeans would know less geography and Americans more.

The localism referenced above is not the only reason for widespread ignorance. The strong adherence to ideology and work within a bureaucratic setting can also greatly narrow one’s worldview and cripple one’s critical abilities.

In effect, a closely adhered to ideology becomes a mental locality with limits and borders just as real as those of geography. In fact, if we consider nationalism a pervasive modern ideology, there is a direct connection between the boundaries induced in the mind and those on the ground.

Furthermore, it does not matter if the ideology is politically left or right, or for that matter, whether it is secular or religious. One’s critical abilities will be suppressed in favor of standardized, formulaic answers provided by the ideology. Just so work done within a bureaucratic setting.

Bureaucracies position the worker within closely supervised departments where success equates with doing a specific job according to specific rules. Within this limited world, one learns not to think outside the box, and so, except as applied to one’s task, critical thinking is discouraged and one’s worldview comes to conform to that of the bureaucracy. That is why bureaucrats are so often referred to as cogs in a machine.

That American ignorance is explainable does not make it any less distressing. At the very least it often leads to embarrassment for the minority who are not ignorant. Take for example the facts that polls show over half of American adults don’t know which country dropped the atomic bomb on Hiroshima, or that 30 percent don’t know what the Holocaust was.

We might explain this as the result of faulty education; however, there are other, just as embarrassing, moments involving the well educated. Take, for instance, the employees of Fox News. Lou Dobbs (who graduated from Harvard University) is host of the Fox Business Network talk show Lou Dobbs Tonight. Speaking on March 23 about gun control, he and Fox political analyst Angela McGlowan (a graduate of the University of Mississippi) had the following exchange:

McGlowan: “What scares the hell out of me is that we have a president . . . that wants to take our guns, but yet he wants to attack Iran and Syria. So if they come and attack us here, we don’t have the right to bear arms under this Obama administration.”

Dobbs: “We’re told by Homeland Security that there are already agents of Al Qaeda here working in this country. Why in the world would you not want to make certain that all American citizens were armed and prepared?”

Despite education, ignorance plus ideology leading to stupidity doesn’t come in any starker form than this. Suffice it to say that nothing the President has proposed in the way of gun control takes away the vast majority of weapons owned by Americans, that the President’s actions point to the fact that he does not want to attack Syria or Iran, and that neither country has the capacity to “come and attack us here.”

Finally, while there may be a handful of Americans who sympathize with Al Qaeda, they cannot accurately be described as “agents” of some central organization that dictates their actions.

Did the fact that Dobbs and McGlowan were speaking nonsense make any difference to the majority of those listening to them? Probably not. Their regular listeners may well be too ignorant to know that this surreal episode has no basis in reality. Their ignorance will cause them not to fact-check Dobbs’s and McGlowan’s remarks. They might very well rationalize away countervailing facts if they happen to come across them. And, by doing so, keep everything comfortably simple, which counts for more than the messy, often complicated truth.

Unfortunately, one can multiply this scenario many times. There are millions of Americans, most of whom are quite literate, who believe the United Nations is an evil organization bent on destroying U.S. sovereignty. Indeed, in 2005, George W. Bush actually appointed one of them, John Bolton (a graduate of Yale University), as U.S. ambassador to the United Nations.

Likewise, so paranoid are gun enthusiasts (whose level of education varies widely) that any really effective government supervision of the U.S. gun trade would be seen as a giant step toward dictatorship. Therefore, the National Rifle Association, working its influence on Congress, has for years successfully restricted the Bureau of Alcohol, Tobacco, Firearms and Explosives from using computers to create a central database of gun transactions.

And, last but certainly not least, there is the unending war against teaching evolution in U.S. schools. This Christian fundamentalist effort often enjoys temporary success in large sections of the country and is ultimately held at bay only by court decisions reflecting (to date) a solid sense of reality on this subject. By the way, evolution is a scientific theory that has as much evidence to back it up as does gravity.

As troubling as this apparently perennial problem of ignorance is, it is equally frustrating to listen to repeated schemes to teach critical thinking through the public schools. Of course, the habit of asking critical questions can be taught. However, if you do not have a knowledge base from which to consider a situation, it is hard think critically about it.

So ignorance often precludes effective critical thinking even if the technique is acquired. In any case, public school systems have always had two primary purposes and critical thinking is not one of them. The schools are designed to prepare students for the marketplace and to make them loyal citizens.

The marketplace is most often a top-down, authoritarian world and loyalty comes from myth-making and emotional bonds. In both cases, really effective critical thinking might well be incompatible with the desired end.

Recently, a suggestion has been made to forget about the schools as a place to learn critical thinking. According to Dennis Bartels’s article “Critical Thinking Is Best Taught Outside the Classroom” appearing in Scientific American online, schools can’t teach critical thinking because they are too busy teaching to standardized tests.

Of course, there was a time when schools were not so strongly mandated to teach this way and there is no evidence that at that time they taught critical thinking. In any case, Bartels believes that people learn critical thinking in informal settings such as museums and by watching the Daily Show with Jon Stewart.

He concludes that “people must acquire this skill somewhere. Our society depends on them being able to make critical decisions.” If that were only true it would make this an easier problem to solve.

It may very well be that (consciously or unconsciously) societies organize themselves to hold critical thinking to a minimum. That means to tolerate it to the point needed to get through day-to-day existence and to tackle those aspects of one’s profession that might require narrowly focused critical thought.

But beyond that, we get into dangerous, de-stabilizing waters. Societies, be they democratic or not, are not going to encourage critical thinking about prevailing ideologies or government policies. And, if it is the case that most people don’t think of anything critically unless it falls into that local arena in which their lives are lived out, all the better.

Under such conditions people can be relied upon to stay passive about events outside their local venue until the government decides it is time to rouse them up in some propagandistic manner.

The truth is that people who are consistently active as critical thinkers are not going to be popular, either with the government or their neighbors. They are called gadflies. You know, people like Socrates, who is probably the best-known critical thinker in Western history. And, at least the well educated among us know what happened to him.

← The Right’s Anti-Treaty Bias
Behind the North Korean Crisis →

13 comments for “The Whys of American Ignorance”