A key argument of the American Right is that treaties are an affront to U.S. “sovereignty” and “constitutional governance,” even though the Founders embraced treaties with other nations. Today’s anti-treaty bias threatens to undermine U.S. influence in the world, writes ex-CIA analyst Paul R. Pillar.

The United States has an inveterate domestic opposition, concentrated primarily on one side of its political spectrum, to any participation in international institutions, broadly defined. Institutions for this purpose include not only general-purpose international organizations but also the legal structures provided by multilateral treaties.

Often there are specific, legitimate objections involved, but most of the opposition is of a more general and visceral nature. It is opposition rooted primarily in the mistaken belief that participation in such institutions somehow compromises one’s sovereignty, even though voluntary participation is itself an act of sovereignty. 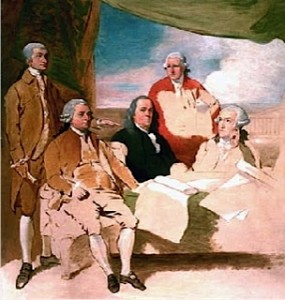 A portion of Benjamin West’s painting showing the American participants in the 1783 Treaty of Paris, which negotiated the end of the Revolutionary War. From left to right are John Jay, John Adams, Benjamin Franklin, Henry Laurens, and William Temple Franklin. The British commissioners refused to pose, and the picture was never finished.

The Law of the Sea convention is one of the most familiar subjects of such opposition. The convention has now been in force for nineteen years. The United States is one of only a handful of non-landlocked countries that is not a party, even though U.S. adherence to the convention has been recommended by Republican and Democratic presidents alike as well as by the Defense Department, environmentalists, the oil and gas industries, and, in the words of former Republican Senator Richard Lugar, almost everyone who deals “with oceans on a daily basis.”

Opposition cannot disguise or negate the respects in which some of these institutions can serve useful purposes and meet practical needs. They can do so for the United States just as they can for many other countries, which is why many other countries subscribe to them.

An opposing school, populated by realists, contends that international organizations are fundamentally creatures of nation-states and especially of great powers, and they continue in existence only as long as they serve a purpose for those states. That realist observation underscores how such institutions can be useful to the United States. It also shows that one does not have to be an international-organization-hugger to perceive that usefulness.

The International Criminal Court is an example of an international organization that the United States, despite having some continued well-founded reservations about the scope of its authority, has found useful. So the United States has been quietly cooperating with the court.

The most recent defendant to come into the court’s custody, one of those rapacious warlords operating in eastern Congo, gave himself up by walking into the U.S. embassy in Rwanda. Without the ICC to turn him over to, it would have been hard to imagine a good way for the United States to handle the situation.

The most recent multilateral convention to be opened for signature is a treaty to regulate the international arms trade. The United Nations General Assembly approved the treaty this week with 154 votes in favor and only three against. The U.S. administration had the good sense to vote yes and avoid being in a small minority consisting of odious company.

But the prospects of the United States eventually subscribing to the treaty are dim, because the National Rifle Association, lining up on the same side of this issue as the regimes in Iran, North Korea and Syria, has made it clear it will oppose ratification.

In staying out of many of these institutions the United States is paying a price, whether the opposition to participation is purely an ideological statement or, as with the NRA’s opposition to the arms trade treaty, an absolutist resistance to any of the sort of controls the opponent doesn’t happen to like.

The price comes not just in the form of being isolated or part of a mostly loathsome minority. It comes as a forgoing of tools the United States otherwise could use to help it solve real problems.

3 comments for “The Right’s Anti-Treaty Bias”