The warnings about fallout from nuclear tests six decades ago often noted that cancers from the radiation would probably not begin appearing in large numbers for many years. But that time is now and medical experts are wondering whether the surge in some cancers is a result, writes John LaForge.

Back in the 1950s and 1960s, the Atomic Energy Commission doused the entire United States with thyroid cancer-causing iodine-131, and 300 other radioisotopes, by exploding atomic and hydrogen bombs above ground. To protect the dirty, secretive, militarized bomb-building industry, the government chose to warn the photographic film industry about the radioactive fallout patterns, but not the general public.

In 1951, the Eastman Kodak Company had threatened a federal lawsuit over the nuclear fallout that was fogging its bulk film shipments. Film was not packed in bubble wrap then, but in corn stalks that were sometimes being fallout-contaminated. 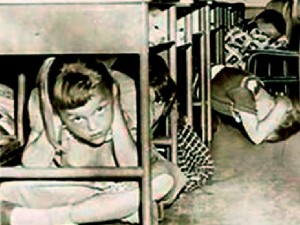 During nuclear bomb drills in the 1950s, school children were ordered to hide under their desks.

By agreeing to warn Kodak, etc., the AEC and the bomb program avoided the public uproar, and the bomb testing program’s possible cancellation, that a lawsuit would have precipitated. The settlement kept the deadliness of the fallout hidden from farmers and the public, even though the government well knew that fallout endangered all the people it was supposed to be defending.

This staggering revelation was heralded on Sept. 30, 1997, in the New York Times headline, “U.S. Warned Film Plants, Not Public, About Nuclear Fallout.” The article began, “[W]hile the Government reassured the public that there was no health threat from atmospheric nuclear tests” The fallout’s radioactive iodine-131delivered thyroid doses to virtually all 160 million people in the U.S. at the time.

According to the Institute for Energy and Environmental Research (IEER) in Takoma Park, Maryland, which discovered the cover-up, children were especially affected and received higher doses because they generally consumed more milk than adults and since their thyroids are smaller and growing more rapidly. The “milk pathway” moves radioiodine from grass, to cows, to milk with extreme efficiency, a fact known to the government as early as 1951.

Ingested iodine-131 concentrates in the thyroid gland where it can cause cancer. Average doses to children averaged between 6 and 14 rad, with some as high as 112 rad. Prior to 1997, the government claimed that thyroid doses to children were 15 to 70 times less.

Every Corner of the U.S.

My friend Steve O’Neil of Duluth, Minnesota, who was born in 1951, has been a public spirited political activist all of his adult life, an advocate for the homeless and a campaigner against the causes of homelessness.

As a St. Louis County Commissioner in his third term, Steve made headlines this month by announcing that he has been attacked by an aggressive form of thyroid cancer. Steve is not alone in his affliction, more than 60,000 thyroid cancers will be spotted this year in the U.S. Tens of thousands of them have been caused by our government’s nuclear weapons establishment.

The National Cancer Institute disclosed in 1997 that some 75,000 thyroid cancer cases can be expected in the U.S. from just 90, out of a total of 235, above-ground bomb tests and that 10 percent of them will be fatal. That year, the NCI said, about 70 percent of the thyroid cancers caused by iodine-131 fallout from those 90 tests had not yet been diagnosed but would appear years or decades later.

The study reported that all 160 million people in the country at the time were exposed to the iodine-131 (the only isotope out of more than 300 that were dispersed by the bomb blasts that it studied). Children under 15, like Steve O’Neil and all the Baby Boomers, were particularly at risk. High doses of fallout were spread nation-wide. Wind patterns and local rainfall caused “hot spots” from Montana and Idaho to South Dakota, Minnesota, Missouri and beyond.

In 1962, according to IEER, officials in Utah and Minnesota diverted possibly contaminated milk from the market when iodine-131 levels exceeded radiation guidelines set by the Federal Radiation Council (FRC). The FRC reacted harshly and declared that it did “not recommend such actions.” The FRC also announced that its radiation guidelines should not be applied to bomb test fallout because “any possible health risk which may be associated with exposures even many times above the guide levels would not result in a detectable increase in the incidence of disease.”

IEER’s scientists condemned this fabulously implausible assurance, writing: “Since thyroid cancers can develop many years after radiation exposure and are therefore not immediately detectable, this reassurance was highly misleading.”

The National Cancer Institute’s 1997 study said about 16,000 cases of thyroid cancer were diagnosed in the U.S. annually, and that 1,230 would die from the disease. This estimate turned out to be a gross under-statement.

Today the NCI reports that 60,220 new cases of thyroid cancer will be diagnosed in the U.S. this year, and that 1,850 of them will be fatal. The thyroid cancer “balloon” is with us because the nuclear weapons complex under Presidents Dwight Eisenhower and John F. Kennedy attacked the very people it was said to be defending. Yet, it gets worse.

The UN Scientific Committee on the Effects of Atomic Radiation says that iodine-131 doses comprise only two percent of the overall radiation dose from weapons testing. Ninety-eight percent of our fallout dose is from 300 other isotopes produced by the Bomb.

It is not idle speculation to suggest that the cancer pandemic afflicting the people of the U.S. has been caused by our own government’s deliberately secret and viciously reckless weapons program.

John LaForge works for Nukewatch, a nuclear watchdog group in Wisconsin, edits its Quarterly newsletter, and is syndicated through PeaceVoice.

← Obama’s Nuke Double Standards
Obsessing Too Much on ‘Terror’ →

8 comments for “Reaping the Seeds of Nuke Tests”