By glorifying or sanitizing war, U.S. officials and a complicit news media may insist they are shielding “the troops” from unfair criticism. But real democracy and simple human decency require that citizens know the full and often ugly truth, as Michael True notes in this review of Nick Turse’s Kill Anything That Moves.

The title of Nick Turse’s brilliant history, Kill Anything That Moves, was a commanding officer’s response to a soldier’s question, “Are we supposed to kill women and children?”

In contrast, an army criminal investigator’s response to a veteran, who revealed that American soldiers were abusing and killing Vietnamese civilians, was: “The United States has never condoned wanton killing or disregard for human life.” 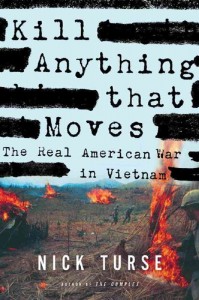 Turse’s readable, indispensable, and, yes, deeply disturbing book may be the most important among thousands of books about the Vietnam War. A major achievement is its explaining how and why “atrocities perpetrated by US soldiers have essentially vanished from public memory.” In authenticity and power, it compares favorably with earlier accounts, such as Tim O’Brien’s novel, The Things They Carried, and Bruce Weigl’s poems, Song of Napalm.

Titles of chapters of Turse’s book convey a general sense of the grim and tragic accounts of the war: “A System of Suffering,” “Overkill,” “A Litany of Atrocities,” and “Unbound Misery.”  In the process, the author documents a commander’s standard operating procedure, including burying bad news, concealing violations of military law, and papering over miscarriages of justice.
In training before going to Vietnam, soldiers were taught to regard the Vietnamese as inferior, even inhuman, referring to them not as “the enemy,” but as “gooks” or “dinks.” This practice reflected the contempt with which the country was regarded by President Lyndon Johnson, who called Vietnam “a piddling piss-ant little country,” as well as Secretary of Defense Robert McNamara, who referred to it as a “backward nation.”

In a representative account of civilians victimized by the troops, a mother returning home came upon the bodies of her son and two others riddled with bullets. They had been tending the family ducks, while their mother was away for a brief period. Encouraged to raise the body count in this way, one soldier amassed an estimated 1,500 “enemy killed-in-action,” by planting Chinese communist grenades on bodies so that they would be counted as enemy dead.

A particularly chilling, though not unrepresentative, account of an “industrial-scale slaughter” involved a two-star general. As field commander in the Mekong Delta, he “made the killing of civilians into standard operating procedure.” In an early briefing, he announced his plan “to begin killing 4,000, then 6,000 a month of these little bastards” then went on from there. As an associate said of another officer, for him, “body count was everything.”

Reasonable estimates account for 3.8 million violent war deaths, combatant and civilian, according to reports by Harvard Medical School and an Institute for Health Metrics and Education report. An official 1995 Vietnamese government report estimated more than 3 million deaths, a million of them civilians. Civilian victims of the war included 8,000-16,000 South Vietnamese paraplegics, 30,000-60,000 South Vietnamese left blind, and 83,000 to 166,000 South Vietnamese amputees. These estimates do not include the tens of thousands of Americans and North Vietnamese dead and wounded.

Some information about atrocities, though  “prematurely closed and buried,” was assembled by “Conduct of the War in Vietnam,” a task force established by the top commander in Vietnam and later Army Chief of Staff, General William Westmoreland. In what Turse describes as a “whitewash of a report,” it concluded that “criminal acts that occurred during General Westmoreland’s tenure in Vietnam were neither wide-spread nor extensive enough to render him criminally responsible for their commission.”
More recently, other government officials have re-branded or dispatched the Vietnam War to the dustbin of history. Their re-writing of history perpetuates misleading accounts by reporters and irresponsible editors who ignored or withheld essential information from the beginning of American involvement in 1965.

In spite of efforts to silence them and to deprive the public of an accurate account of the war, many veterans, at considerable risk, gave detailed accounts of their own involvement and the policies that led to various war crimes. In 12 years of research, reading files and interviewing witnesses, Turse documented their testimonies. It included Jamie Henry’s testimony, at a press conference in 1970, that the murders at My Lai was only one of similar incidents that occurred “on a daily basis and differ from one another only in terms of numbers killed.”

The perspective that Turse brings to this history is truly a gift to public discourse. “Never having come to grips with what our country did during the Vietnam war,” he says, “we see its ghost arise anew with every successive intervention.”

In the conclusion, he asks questions that offer a means to our understanding its full implications, and other wars that followed: “Was Iraq the new Vietnam? Or was that Afghanistan? Do we see ‘light at the end of the tunnel’?  Are we winning ‘hearts and minds’? Is ‘counterinsurgency’ working? Are we applying ‘the lessons of Vietnam’? What are those lessons anyway?”

An obvious answer to these questions might be that those responsible for U.S. foreign policy never met a war they didn’t like. In spite of that fact, as Andrew Bacevich said, the Pentagon hasn’t won a war since 1945.

One wishes that every American citizen might read Kill Everything That Moves, and take to heart its account of a brutal, unnecessary war and the evil that we were responsible for. Sadly, we continue to be lied to about the full implications of U.S. foreign policy that undermine democratic governance.

4 comments for “Facing Up to US War Crimes”