Many Americans forget how intimidating it was a decade ago for any U.S. citizen to speak out against President George W. Bush’s rush to war with Iraq. For example, the Dixie Chicks got death threats and actor Sean Penn was denounced as “a stooge of Saddam,” as Norman Solomon recalls.

On a plane circling Baghdad in gray dawn light, a little Iraqi girl quietly sang to herself in the next row. “When I start to wonder why I’m making this trip,” Sean Penn murmured to me, “I see that child and I remember what it’s about.”

After the plane landed at Saddam International Airport, we waited in a small entry room until an Iraqi official showed up and ushered us through customs. Soon we checked into the Al-Rashid Hotel. Back in Washington the sponsor of our trip, the Institute for Public Accuracy, put out a news release announcing the three-day visit and quoting Sean: “As a father, an actor, a filmmaker and a patriot, my visit to Iraq is for me a natural extension of my obligation (at least attempt) to find my own voice on matters of conscience.” 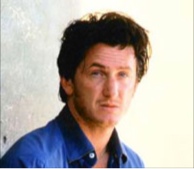 With U.S. war drums at feverish pitch, Sean Penn’s sudden appearance in Baghdad set off a firestorm of vilification in American media. Headlines called him “Baghdad Sean”; pundits on cable news channels called him a stooge for Saddam.

But as the U.S. media attacks got underway, our focus was Baghdad. At the Al-Mansour Children’s Hospital, youngsters lay on threadbare mattresses with haunting dark eyes, mournful mothers sometimes seated next to their tiny beds. As we left, Sean said to me: “You don’t even want someone to slam a door too loud around these children, let alone imagine a bomb exploding in the neighborhood.”

There were meetings with Iraqi officials, including Tariq Aziz, who — with his well-cut suit and smooth talk — epitomized the urbanity of evil. But most of all, we kept seeing children and wondering what would happen to them. The threat of war overshadowed everything.

UNICEF took us to schools in the city, and improvements were striking in the ones being helped by the agency. Sean and I visited the office of UNICEF’s Iraq director, a Dutchman who talked about prospects for aiding the country’s emaciated kids. But what if an invasion happens, we asked. Suddenly, there was silence.

On our last morning in Baghdad, across a breakfast table of pita bread and hummus, I watched Sean write out a statement on a pad. Later in the day, speaking at a huge news conference, he said: “I feel, both as an American and as a human being, the obligation to accept some level of personal accountability for the policies of my government, both those I support and any that I may not. Simply put, if there is a war or continued sanctions against Iraq, the blood of Americans and Iraqis alike will be on our hands.”

That was 123 months ago, in mid-December 2002. The invasion of Iraq came a hundred days later.

The resulting tragedies have been so horrific and large-scale that the overall reporting by U.S. mass media scarcely provides a clue. In real time and in retrospect, the dominant cliches about this war have stayed in circular motion, self-referential, within American bubbles.

Occasional, usually dimmed, strobe lights flicker on the real suffering of American soldiers and their loved ones. Numerically much larger, the Iraqi suffering gets short shrift, barely discernible in the shadows of U.S. media and politics.

A just-released report, “Iraq War Among World’s Worst Events,” provides a cogent summary of devastation so extensive and terrible that readers will be challenged to not turn away. In the report, David Swanson offers a 10-year overview of human consequences of moral turpitude for which no American official or propagandist has been held accountable.

Ten years after the invasion of Iraq, don’t expect the vast numbers of media hotshots and U.S. officials who propelled that catastrophe to utter a word of regret. Many are busy with another project: assisting the push for war on Iran.

Days ago, speaking of possible actions against Iran, President Barack Obama told an Israeli TV reporter: “I continue to keep all options on the table.” Earlier this month, Vice President Biden told AIPAC’s annual conference that the president “is not bluffing.” Biden said “all options, including military force, are on the table.” Those statements are similar to the threats from President Bush and Vice President Cheney before the invasion of Iraq.

Norman Solomon is co-founder of RootsAction.org and founding director of the Institute for Public Accuracy. His books include War Made Easy: How Presidents and Pundits Keep Spinning Us to Death. He writes the Political Culture 2013 column.

← What Happened to the US Press Corps?
Taking ‘Gun Rights’ Global →

9 comments for “A Warfare State of Mind”