For years, the NRA and the American Right have played games with some imprecise wording in the Second Amendment, which was always about a state’s right to have a well-regulated militia, but now those games are distorting U.S. foreign policy, too, says ex-CIA analyst Paul R. Pillar.

Those of us who worry and write more about foreign affairs than about domestic ones have largely been spared confrontation with the formidable U.S. gun lobby. There is only the sadness any citizen can feel at this country’s political inability to regulate effectively the trade in implements used in the sorts of violent incidents that have led gun control to move back, at least for now, to a prominent place on the national agenda.

The resumption this week, however, of multilateral negotiations on a treaty on the international trade in conventional arms demonstrates that foreign policy is not immune to the gun lobby’s heavyweight presence. The lobby, as represented most familiarly by the National Rifle Association, is by no means the only source of disquiet about such a treaty in the United States, which is, by a small margin over Russia, the world’s leading arms exporter. But the lobby is mounting a significant effort to spike the treaty even before negotiations are complete. 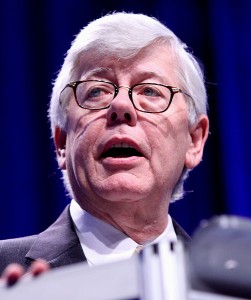 The idea of implementing additional international legal control on the arms trade has been around for some time. Diplomatic activity leading directly to the current negotiations began about a decade ago.

Back in the 1970s, ultimately unsuccessful bilateral negotiations to curb the trade in conventional arms took place between the two largest arms sellers, the United States and the Soviet Union. The type of multilateral treaty that is currently under discussion at the United Nations would hardly be a cure-all for the kinds of internal violence that are the main concern.

It would, however, be a modest and reasonable measure to provide a legal framework aimed at reducing the means for perpetrating the most egregious instances of such violence, and otherwise creating greater transparency in the international arms trade.

The NRA has introduced some strange arguments against the not-yet-completed treaty, forming an interesting contrast to arguments it is making against domestic gun control legislation.

The organization argues that military and civilian firearms are two different and easily distinguishable things, and that although military arms are a legitimate subject for such a treaty the problem is that civilian guns also would be caught up in it. That position hardly seems consistent, at least in spirit, with the NRA’s vigorous opposition to Sen. Dianne Feinstein’s bill to curb the trade in military-style assault rifles to civilians.

The NRA also notes with alarm that under some of the draft versions of the treaty that have been circulated, “law-abiding Americans” might not be able to buy foreign-made guns because exports could be blocked if they would “support” or “encourage” terrorist acts or “provoke, prolong or aggravate acts of aggression or other breaches of the peace,” or could be used in “gender-based violence” or to inflict “human suffering.”

Of course, in opposing domestic legislation the NRA contends that the gun trade doesn’t do any of those things. Granted, this is not an outright contradiction, because the organization is saying that it is only the claims of “anti-gun activists” that could lead foreign governments to “abuse” this provision in a treaty. But if this is not a contradiction, it certainly is a contortion.

Under such requirements, according to the NRA, “if you bought a Beretta shotgun, you would be an ‘end user’ and the U.S. government would have to keep a record of you and notify the Italian government about your purchase. That is gun registration. If the U.S. refuses to implement this data collection on law-abiding American gun owners, other nations might be required to ban the export of firearms to the U.S.”

In other words, the gun lobby opposes the treaty because if the gun lobby is successful enough in the future to get the U. S. government not to fulfill obligations under the treaty, other countries might react in ways the gun lobby doesn’t like.

It is hard to believe the NRA lobbyists take this sort of stuff seriously. More likely what we are seeing is simply unrelenting opposition to anything that is at all related to controlling munitions and thus could be part of a slippery slope that might increase even marginally the chance of effective domestic gun control in the future.

Meanwhile, this lobbying is impeding effective U.S. participation in the creation of a treaty that, it should be remembered, is not just about shotguns and rifles but also tanks, jet aircraft and all other kinds of conventional armament.

As in the debates about domestic gun control, there is the added confusion of trying to make this a constitutional issue. The Second Amendment is patently about militias, and as any American high school student ought to know, the Bill of Rights of which it is a part was born amid a vigorous debate over ratification of the original Constitution.

The overriding concern of those who resisted ratification was about the power of the new federal government. The particular concern about militias and about state power was intensified by the provision in the original Article II that gave the president the power to take command of the state militias.

The individual right that got discussed in connection with this was not so much a right to have a gun but rather the right on religious grounds to avoid service in a militia. James Madison’s original version of what would become the Second Amendment said that “the right of the people to keep and bear arms shall not be infringed, a well-armed and well-regulated militia being the best security of a free country, but no conscientious objector shall be compelled to render military service in person.”

The provision about conscientious objectors received the most attention in debate in the House of Representatives, which ultimately left it in. The Senate took it out, while almost putting in the clarifying language “for the common defense.” After some more rearrangement of words we got the Second Amendment we have today, an amendment written not just by one but by several committees.

It’s too bad there wasn’t some master editor back then who could, with a single pen, express most clearly the consensus intent, producing language such as: “The right of the states to maintain well-armed, well-regulated militias shall not be infringed.”

That might have avoided or at least reduced a number of problems, including the NRA messing around with foreign policy.