The U.S. rush to build a giant arsenal of nuclear weapons during the Cold War created an environmental disaster at Hanford in Washington State along the Columbia River. Clean-up costs are staggering and radioactive sludge threatens to contaminate the region’s water supply, writes nuclear watchdog John LaForge.

Hanford is perhaps the dirtiest reactor site in the world with 1,000 inactive dumps, 100 to 200 square miles of contaminated ground water, and 50,000 drums of plutonium wastes in temporary storage. 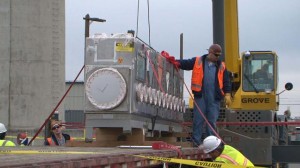 Contract employees working on the demolition of a plutonium vault complex at the Hanford Nuclear Reservation.in Washington State in 2011. (Photo credit: Energy Department)

For 40 years, Hanford’s eight production reactors made plutonium for H-bombs, and in the process its contractors dumped plutonium, cesium, technetium, tritium, strontium and other isotopes into the air, soil, ground water and, astonishingly, even directly into the Columbia River, the drinking water source for downstream cities.

Hanford has 54 million gallons of the high-level liquids and sludge in 177 aged and decrepit tanks. In the 1980s, the Department of Energy (DOE) disclosed that up to 69 of the million-gallon tanks were leaking. February’s disclosure makes 75.

In 1998, the DOE said it expected all the tanks to leak eventually. Twenty years ago Newsweek declared that all “177 unlabeled tanks leak radioactive glop.” Several million gallons have since been removed for processing.

DOE spokeswoman Lindsey Geisler said late last month there was no immediate health risk from the newly discovered leaks. This reassurance is suspect since the DOE said for decades that tank wastes would take 10,000 years to reach the ground water. It got there in less than 40.

A similar but contemporary PR twist came Feb. 22, when Washington Gov. Jay Inslee said that the state would impose a “zero-tolerance” policy on radioactive waste leaking into the soil. Looking back at Hanford’s record, a “zero-containment” policy is more likely.

This season’s leaks, which reportedly amount to 300 gallons per year, seem barely newsworthy in view of the colossal dumping that’s been done at Hanford. In the heyday of plutonium production, the Seattle Times has reported, “The DOE estimates that as many as 750,000 curies of radioactive iodine, xenon, cesium, strontium, plutonium and uranium may have been put into the Columbia River each year in the 1950s.”

A week earlier the paper reported said, “Many of the releases involved dumping of cooling water into the Columbia River.” Tim Connor of Hanford Watch in Spokane told the paper that daily releases of 430 curies noted in one 1946 report were, “the equivalent of a Three Mile Island accident every hour.”

DOE officials admitted in 1991 that managers dumped 440 billion gallons of radioactive liquids directly into the soil, using ditches, cribs, trenches and injection wells, and that hazardous waste had “fouled the Columbia River.” A 1965 report from Hanford among 19,000 pages of documents declassified in 1986 says “a total of 6 million curies” of radioactive material were dumped directly into the Columbia. In 2000, the DOE estimated that the tanks held 190 million curies of radioactivity.

Leaving aside the billions of gallons of nuclear poisons poured directly into it, the New York Times reported in Oct. 1997 that, “If leaks from the tanks reach the Columbia River through ground water, radioactive material would eventually be incorporated into the food chain and could expose people to radiation for centuries.”

And even with all these millions of curies thrown into the soil, a ground water manager at Hanford said in 2000 that the “worst” tank wastes, including technetium-99 and cobalt-60, are “probably still 20 years away” from the Columbia.

Twenty-five years since its reactors were shut down (they stopped making plutonium in 1987) leaking plutonium tank wastes are not the only way that Cold War cancers are still being dispensed from Hanford.

Wildfires burned 300 acres of the reservation in summer 2000, when Energy Secretary Bill Richardson rushed to say July 1, “There does not appear to be any contamination whatsoever.” Wrong again. By Aug. 3, plutonium was found to have been lofted to 10 far-flung areas, including five Eastern Washington city neighborhoods.

Even then, Jerry Leitch, an EPA official at the time, told the Seattle Post that the amount of plutonium was below what’s considered a threat to health.Really? A single atomic particle of plutonium if inhaled can cause lung cancer.

The estimated cost of cleanup, the most expensive anti-pollution effort in history, has steadily increased. In 1989, DOE guessed it would take $57 billion and 50 years. By 1997 its estimate was over $200 billion.

The DOE has long worried that its waste tanks, at Hanford and at Savannah River, South Carolina, could explode due to the buildup of hydrogen gas or organic vapors. Indeed, a 1965 explosion at Hanford ruptured one tank that subsequently leaked 800,000 gallons of cooling water into the soil. Again on May 14, 1997, a tank holding plutonium processing chemicals blew up, sending its heavy steel lid and a plume of toxic gas through the roof.

Arjun Makhijani has said that an analysis by the DOE in 1978 put that chance of hydrogen explosions Savannah River’s tanks at 1-in-10,000. Chances of an explosion of organic vapors were ten times higher, or 1-in-1,000. Considering the number of tanks, the chance of one of them having an explosion was one-in-50 each year.

In 1986, researcher Michael Blain at Boise State University showed that women in Eastern Washington and Northern Idaho had elevated rates of thyroid and breast cancer and said there was a high probability that “the excess cancers are attributable to the release of radioactive iodine.”

Cancers, miscarriages and other health problems suffered by people in the area have been blamed on the deliberate spewing of 5,500 curies of iodine-131 to the atmosphere in a Dec. 3, 1949, experiment called “green run,” and on the offhand dispersal of 340,000 curies in 1945 alone.

In 1974, Dr. Samuel Milham in Washington’s state health department published his finding that men who had worked at Hanford had a 25 percent higher proportion of cancer deaths than for similarly aged men in other work.

And in 1977, the journal Health Physics published Alice Stewart, Thomas Mancuso and George Kneal’s finding of a 6 or 7 percent increased cancer effect in Hanford workers. About this increase Dr. Stewart said, “It wasn’t much of an effect but the shock was that there was any effect at all since the cancers were occurring at radiation exposure levels well below the official limit of five rads per year. It meant that the current standards for nuclear safety might be as much as 20 times too high.”

In 1990, a DOE analysis of radiation exposures downwind from Hanford found that infants and children were heavily contaminated because of drinking contaminated milk. The Hanford Environmental Dose Reconstruction Project found that 13,500 people may have received doses over 33 rads of iodine-131 and that infants and children closest to Hanford could have consumed between 650 and 3,000 rads. Even a single rad can cause thyroid cancer and other illnesses.

Not to put too fine a point on it: Hanford’s latest six leaks are the tip of its iceberg of radiation which is spreading to the Columbia River and beyond a plague of cancer and disease that will never come to an end.

John LaForge works for Nukewatch, a nuclear watchdog and environmental justice group in Wisconsin, and edits its quarterly newsletter. (nukewatchinfo.org)

← ‘October Surprise’ and ‘Argo’
Mother of the Sit-Down Strike →