Going to Tehran arguably represents the most important work on the subject of U.S.-Iran relations to be published thus far. Flynt Leverett and Hillary Mann Leverett tackle not only U.S. policy toward Iran but the broader context of Middle East policy with a systematic analytical perspective informed by personal experience, as well as very extensive documentation.

More importantly, however, their exposÃ© required a degree of courage that may be unparalleled in the writing of former U.S. national security officials about issues on which they worked. They have chosen not just to criticize U.S. policy toward Iran but to analyze that policy as a problem of U.S. hegemony. 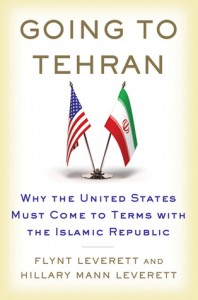 Their national security state credentials are impeccable. They both served at different times as senior coordinators dealing with Iran on the National Security Council staff, and Hillary Mann Leverett was one of the few U.S. officials who have been authorized to negotiate with Iranian officials.

Both wrote memoranda in 2003 urging the George W. Bush administration to take the Iranian “roadmap” proposal for bilateral negotiations seriously but found policymakers either uninterested or powerless to influence the decision. Hillary Mann Leverett even has a connection with the powerful American Israel Public Affairs Committee (AIPAC), having interned with that lobby group as a youth.

After leaving the U.S. government in disagreement with U.S. policy toward Iran, the Leveretts did not follow the normal pattern of settling into the jobs where they would support the broad outlines of the U.S. role in world politics in return for comfortable incomes and continued access to power.

Instead, they have chosen to take a firm stand in opposition to U.S. policy toward Iran, criticizing the policy of the Barack Obama administration as far more aggressive than is generally recognized. They went even further, however, contesting the consensus view in Washington among policy wonks, news media and Iran human rights activists that President Mahmoud Ahmadinejad’s election in June 2009 was fraudulent.

The Leveretts’ uncompromising posture toward the policymaking system and those outside the government who support U.S. policy has made them extremely unpopular in Washington foreign policy elite circles. After talking to some of their antagonists, The New Republic even passed on the rumor that the Leveretts had become shills for oil companies and others who wanted to do business with Iran.

The problem for the Establishment, however, is that they turned out to be immune to the blandishments that normally keep former officials either safely supportive or quiet on national security issues that call for heated debate.

In Going to Tehran, the Leveretts elaborate on the contrarian analysis they have been making on their blog (formerly “The Race for Iran” and now “Going to Tehran”) They take to task those supporting U.S. systematic pressures on Iran for substituting wishful thinking that most Iranians long for secular democracy, and offer a hard analysis of the history of the Iranian revolution.

In an analysis of the roots of the legitimacy of the Islamic regime, they point to evidence that the single most important factor that swept the Khomeini movement into power in 1979 was “the Shah’s indifference to the religious sensibilities of Iranians.” That point, which conflicts with just about everything that has appeared in the mass media on Iran for decades, certainly has far-reaching analytical significance.

The Leveretts’ 56-page review of the evidence regarding the legitimacy of the 2009 election emphasizes polls done by U.S.-based Terror Free Tomorrow and World Public Opinon and Canadian-based Globe Scan and 10 surveys by the University of Tehran. All of the polls were consistent with one another and with official election data on both a wide margin of victory by Ahmadinejad and turnout rates.

The Leveretts also point out that the leading opposition candidate, Hossein Mir Mousavi, did not produce “a single one of his 40,676 observers to claim that the count at his or her station had been incorrect, and none came forward independently.”

Going to Tehran has chapters analyzing Iran’s “Grand Strategy” and on the role of negotiating with the United States that debunk much of which passes for expert opinion in Washington’s think tank world. They view Iran’s nuclear program as aimed at achieving the same status as Japan, Canada and other “threshold nuclear states” which have the capability to become nuclear powers but forego that option.

The Leveretts also point out that it is a status that is not forbidden by the nuclear non-proliferation treaty much to the chagrin of the United States and its anti-Iran allies.

In a later chapter, they allude briefly to what is surely the best-kept secret about the Iranian nuclear program and Iranian foreign policy: the Iranian leadership’s calculation that the enrichment program is the only incentive the United States has to reach a strategic accommodation with Tehran. That one fact helps to explain most of the twists and turns in Iran’s nuclear program and its nuclear diplomacy over the past decade.

One of the propaganda themes most popular inside the Washington Beltway is that the Islamic regime in Iran cannot negotiate seriously with the United States because the survival of the regime depends on hostility toward the United States.

The Leveretts debunk that notion by detailing a series of episodes beginning with President Hashemi Rafsanjani’s effort to improve relations in 1991 and again in 1995 and Iran’s offer to cooperate against Al-Qaeda in Afghanistan and, more generally after 9/11, about which Hillary Mann Leverett had personal experience.

Finally, they provide the most detailed analysis available on the 2003 Iranian proposal for a “roadmap” for negotiations with the United States, which the Bush administration gave the back of its hand.

The central message of Going to Tehran is that the United States has been unwilling to let go of the demand for Iran’s subordination to dominant U.S. power in the region. The Leveretts identify the decisive turning point in the U.S. “quest for dominance in the Middle East” as the collapse of the Soviet Union, which they say “liberated the United States from balance of power constraints.”

They cite the recollection of senior advisers to Secretary of State James Baker that the George H. W. Bush administration considered engagement with Iran as part of a post-Gulf War strategy but decided in the aftermath of the Soviet adversary’s disappearance that “it didn’t need to.”

Subsequent U.S. policy in the region, including what former National Security Adviser Bent Scowcroft called “the nutty idea” of “dual containment” of Iraq and Iran, they argue, has flowed from the new incentive for Washington to maintain and enhance its dominance in the Middle East.

The authors offer a succinct analysis of the Clinton administration’s regional and Iran policies as precursors to Bush’s Iraq War and Iran regime change policy. Their account suggests that the role of Republican neoconservatives in those policies should not be exaggerated, and that more fundamental political-institutional interests were already pushing the U.S. national security state in that direction before 2001.

They analyze the Bush administration’s flirtation with regime change and the Obama administration’s less-than-half-hearted diplomatic engagement with Iran as both motivated by a refusal to budge from a stance of maintaining the status quo of U.S.-Israeli hegemony.

Consistent with but going beyond the Leveretts’ analysis is the Bush conviction that the U.S. invasion and occupation of Iraq had shaken the Iranians, and that there was no need to make the slightest concession to the regime. The Obama administration has apparently fallen into the same conceptual trap, believing that the United States and its allies have Iran by the throat because of its “crippling sanctions”.

Thanks to the Leveretts, opponents of U.S. policies of domination and intervention in the Middle East have a new and rich source of analysis to argue against those policies more effectively.

4 comments for “Challenging the Neocons on Iran”