The failure of many mainstream Christian churches to embrace social movements of recent decades from gay rights to women’s equality to peace activism has alienated young people who see the contradictions with Jesus’s teachings of tolerance. Is it too late for established churches, asks Rev. Howard Bess.

The statistics continue to pour in. The churches in America that were once thriving and considered mainline are shrinking and struggling to stay alive. Southern Baptists, United Methodists, Presbyterians and Episcopalians are melting away before our very eyes. Not only are they shrinking in numbers, they are getting very gray. Funeral statistics are up, and wedding numbers are going down.

When total membership is going down, and the only growing statistic is funerals, you have to conclude that something is happening. And you’d be correct. 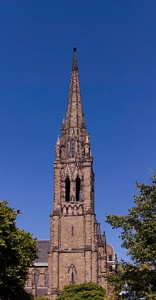 Nothing illustrates today’s dynamics of change more dramatically than the demand for full equality for our gay population, but the history of that struggle over the past several decades has underscored the lack of courage among many mainline Christian denominations.

Over 40 years ago, I became convinced that the Gospel of Christ demanded inclusion of gay persons rather than rejection. Perhaps naively, I thought that my denomination would respond in the spirit of the love that Jesus taught. I did my homework. I looked at the Bible and the teachings of Jesus. I wrote about my views regarding equality and justice for gays. I found some support, but more often I found hostility and rejection.

In 1993, the church of which I was pastor was the first signer of the founding document of the Association of Welcoming and Affirming Baptists. The Association demanded full inclusion of gay persons in our churches. A total of 20 churches signed the charter. We published information and made ourselves known at denominational gatherings until we were excluded from the premises.

Thus, mainline Protestantism opposed one of the most important justice issues of the late 20th Century. Many churches also lost their voice for women’s rights. They walked away from Christ’s passion for peace and erected American flags in their sanctuaries. The poor and the hungry were given no priority.

Not surprisingly, the emerging young began to look elsewhere for guidance in the search for a meaningful life. Yet, interest in religion and interest in Christianity, in particular, are not waning. Interest in the Bible and interest in the prophet Jesus from Nazareth are booming, but mainline denominations are not a significant part of the action.

Young people are still asking questions about meaning, morals and values. They have an incredible amount of information available to them in their handbag, purse or pocket. Not too many years ago, the local parish minister or priest was the community’s source of knowledge about the Bible, Church doctrine and Christian Faith. Now everything the well-educated minister learned in seminary is available on the Internet.

The ability of an ordained clergyperson to turn wine into blood and bread into flesh, according to the Sacraments, is not selling well to the modern mind. Ordained clergy were not necessary for the vital spiritual well-being of the earliest Christians, and many modern Christians are asking, why should priests be necessary in today’s world?

Because of the Internet and instant communication around the world, these dynamics for change are world-wide. The world is indeed flat. What is emerging in our modern culture is a full-scale rejection of institutions and hierarchies as we have known them in America for centuries. It is not simply the churches that are on a downhill slide. Rotary, the Lions, Kiwanis, VFW, American Legion, Masonry and labor unions are suffering the same plight. American political parties also are feeling the pressures of “deinstitutionalism.”

What lies ahead? Home churches, discussion groups, missional groups, bar rooms and cyber church are replacing the inherited church from the past. The emergent energy is enormous and will be spent in some way. Just as emergent Christianity was not foreseen, its future cannot be predicted. It has no hierarchy and is not motivated by power, growth or dominance.

Can mainline Protestantism participate in this new, somewhat chaotic phenomenon? Can a leopard change its spots? Can new growth emerge out of a nearly dead stump? Can a new kind of leadership/clergy impact the inherited bricks and mortar?

9 comments for “The Demise of Mainline Christianity”