Sen. Rand Paul, a Tea Party favorite who will give one of two Republican responses to President Obama’s State of the Union, is deviating slightly from the GOP’s neocon orthodoxy and drawing criticism from the likes of neocon Robert Kagan. But any rethinking of tough-guy-ism is welcome, says ex-CIA analyst Paul R. Pillar.

The foreign policy speech that Sen. Rand Paul gave at the Heritage Foundation last week has received significant attention, and appropriately so. Robert Merry’s mostly sympathetic treatment describes the speech as “seminal.” The Kentucky Republican’s statement indeed represents a significant divergence from the foreign policy thinking that has come to dominate the political party to which he belongs.

An interesting comparison, however, is provided by Robert Kagan’s less sympathetic takeon the speech. Kagan commends Paul’s desire to spark a serious foreign policy debate in his party and in the country, but he sees Paul as hewing to more conventional views, and breaking less specific new ground, than Paul might want us to believe. 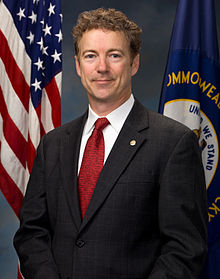 Kagan underestimates the full implications of how Paul’s speech, even if it was light on specific policy prescriptions, departs from the neoconservative-dominated thinking that is currently part of the Republican mainstream. After all, it only takes one equivalent of the Iraq War not to be launched to make a big difference.

Moreover, some of where Paul was less bold in the speech than he might otherwise have been can be attributed to observing the limits of political viability, perhaps with a future presidential run in mind. In noting, for example, Paul’s subscribing to the mantra of “keeping all options on the table” for dealing with Iran, Kagan observes, “A true dissenter would have the temerity to declare that a nuclear Iran, although unfortunate, is nevertheless tolerable and that the military option ought not to be on the table.”

Kagan’s observation is correct, and the true dissenter’s view on this subject would also be correct. But that view unfortunately is still politically incorrect enough to endanger the electability of anyone who expresses it. Unless we expect Barack Obama to challenge that bit of political correctness (and we should), it is probably unfair to expect Rand Paul to challenge it.

Kagan, however, accurately puts his finger on a central theme in Paul’s speech that is not a departure at all, from what is mainstream thinking not only in his own party but across the political spectrum. On this theme, Kagan writes:

“Paul sounds conventional. He calls himself a ‘realist,’ but unlike many realists, he sees the overriding threat to America as ‘radical Islam,’ which he describes as a ‘relentless force’ of ‘unlimited zeal,’ ‘supported by radicalized nations such as Iran’ and with which the United States is indeed at ‘war’ and will be for a long time.

“Unlike critics during the Cold War, who argued that anti-communist ‘paranoia’ produced a self-destructive foreign policy, Paul embraces the dominant ‘paranoia’ of the post-9/11 era. He … shares the average American’s view that radical Islam is today what Soviet Communism was during the Cold War, ‘an ideology with worldwide reach’ that must, like communism, be met by ‘counterforce at a series of constantly shifting worldwide points.’”

In the speech, Paul does indeed play up the comparison to communism and the Cold War confrontation with the Soviet Union, repeatedly invoking George Kennan. He also does some of the homogenizing of purported threats that became familiar during the Cold War.

Although at one point he chides those prone to lumping very different scary Muslims together, by noting how many Americans still mistakenly believe Iraq was responsible for the 9/11 attack, he does a lot of lumping himself. The Iranian regime, Saudi Wahhabists and terrorist cells in Western Europe are all put under the single label of “radical Islam.”

But this subject isn’t anything like the challenge from the USSR and communism during the Cold War, and “radical Islam” really does involve a lot of paranoia on our part. There is nothing remotely comparable to a superpower armed with tens of thousands of nuclear weapons. There are no “radical Islamist” states or possible states that have any chance of challenging U.S. military power even locally, let alone globally.

There is nothing that at all resembles the parallel political and military threats to Western Europe when it faced both Red Army divisions on the Elbe and communist parties that commanded many times more support and parliamentary seats than “radical Islam” could ever hope to achieve. There isn’t even as much international and transnational connectivity and unity of purpose on the adversary side as there was during the Cold War, and even that was less than we, to our cost and discomfort, believed at the time. There is no “radical Islam” Comintern.

The paranoia and the framing of “radical Islam” as a single grand threat has two main sources (in addition to more parochial but politically significant drivers, such as the Israeli government). One is the enormous national trauma inflicted by a single terrorist operation: 9/11. Look at the history of American public opinion and discourse about “radical Islam” and how it changed in a single day from insignificance to an overriding national preoccupation.

The preoccupation really was about terrorism, and terrorism that was not the product of states or foreign insurgencies. And the preoccupation was about the death toll of 9/11, not about some less emotional and more objective measure of how even terrorism poses a threat. There was plenty of official attention prior to 9/11 to threats from radical Islamist terrorism. But it did not become a big national concern and continuing preoccupation until one bunch of terrorists hit a high-casualty jackpot on the U.S. mainland.

The other major source is the strong urge to define foreign policy in terms of a simplifying, seemingly easy-to-understand grand theme, even though the world presents lots of problems and challenges that do not really fit under any one grand theme. Standing up to some single named threat or adversary is the kind of theme that can most readily fill this role.

Confrontation against Soviet communism provided the requisite theme for more than four decades. In the decade after that, following the collapse of the Soviet Union in 1991, would-be George Kennans fumbled for some new grand, all-defining theme. No one really came up with anything that caught on among grand strategy aficionados.

Meanwhile, the general public didn’t worry too much about this conceptual gap while enjoying the prosperity of the 1990s. Then along came 9/11 and instantly both the grand strategists and the public had a new theme that readily caught fire. Initially that theme was defined as a “war on terror.” Then after enough people came to realize the silliness of postulating a war on a tactic, it elided into a war of sorts against what most Americans saw as the face of terrorism, which was “radical Islam.”

Let us, along with both Merry and Kagan, welcome whatever energizing of foreign policy debate comes from Rand Paul’s speech and any other statements like it. There is enough meat and enough difference in what he says that if his views could displace, or even significantly erode, the dominant neoconservative influence in the Republican Party this would be a very significant (and positive) development.

But a truly sweeping redo of thinking about U.S. grand strategy and America’s place in the world will have to await a loosening of the embrace of the dominant paranoia of the post-9/11 era. Until that happens, ideas such as Paul’s will always be at a political disadvantage compared with the tough-guy stance of those arguing that we should forcefully confront the object of that paranoia wherever and whenever it appears.

← To Obama: Close the Deal with Iran
The Demise of Mainline Christianity →