Americans have been sold on the promise of perfect security, whether protecting “the homeland” with gadgets of death or guarding “the homestead” with high-powered assault rifles firing 100-round magazines. But this “safety” is an illusion, making Americans less secure than if they engaged the world around them, as Phil Rockstroh observes.

In the consumer paradigm, one is induced to exist by Eric Hoffer’s dictum: “You can never get enough of what you really don’t need.” Wherein: The individual exists in a state of perpetual adolescence, emotionally oscillating between life lived as a bliss ninny and evincing chronic dissatisfaction.

Ever shifting, inchoate compulsions and endless distractions define the days of the denizens of the consumer state. Text messages and tweets gibber like souls stranded in a limbo realm between the worlds of the living and the damned. 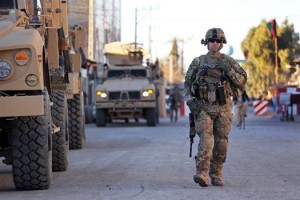 Craving and angst are interwoven. Held by the dazzle of light playing over the surface of a deep abyss, the consumer floats along on waxen wings of debt. The landscape does not seem solid.

Constant craving and callous disregard ascend to the throne room of consciousness in this empire of ephemera. The passions of the heart are circumvented by chronic discontent. In this manic mythos of the eternal moment, consumer items are collected, clutched, and discarded, like the idols and talismans of a dying cult.

But there is neither the time nor inclination to erect statues to these gods of the limbic system; the gods exist as ever-reconfiguring constellations of pixels. As noxious as nixies, they hold the senses enthralled as the global, capitalist paradigm sinks beneath a drowning tide of self-created illusion.

Beneath the endless obligation of debt servitude and the manic distractions of the consumer state, an amorphous dread gathers. Shunted aside, it is experienced as free-floating, low-grade paranoia.

As I place these words to pixel, members of the U.S military sit hunched before computer screens, enacting slaughter by means of predator drone strike. These cubicle-bound soldiers of the consumer state (who have spent their lifetimes within the mass media hologram of late capitalism) regard delivering death from across vast distances as a type of instant, consumerist gratification.

But their actions do not instill a sense of safety within the homeland. Incrementally, it increases the gathering dread, thus this war-by-remote-control is self-perpetuating: warfare experienced as consumer craving, the mode of mind of a shopping addict, but instead of possessing closets bloated with unneeded consumer items, the empire collects corpses.

It is a given, government and corporate insiders scheme and plot. In the days before they had to create the illusion that government officials were responsive to the dictates of the electorate, rulers, their advisors and counselors created deceptive strategies in pursuit of holding and acquiring greater power, in secret, behind closed doors. Withal, their plots were not termed conspiracies; their machinations and attendant acts were called a day at work.

“Panic is the sudden realization that everything around you is alive.” — William S. Burroughs, from Ghost of Chance

The U.S. possesses a cheap-seats view of reality but skybox level self-deceptions.

A conspiracy-apprehending mode of mind attempts to find connections and detect affinities. In this respect, it is similar to a poetic sense of awareness. Although, this distinction is imperative: a habitually paranoiac perspective must have a tendency toward introspective self-awareness i.e., an ego-leavening element, or it tends to become pathologically self-centered.

Thus: An inner conspiracy is locked into place, confining the psyche of the sufferer in a mental realm of self reference whereby life itself, in its unknowable vastness, threatens to penetrate, causing the fragile ego-construct of the paranoia prone to erect even greater barriers of insularity, thus creating the effect of a psychical room of infinity mirrors.

The U.S. is a paranoid culture. The nation has no foreign enemies posing an existential threat, yet it swoons in collective fear and bristles with the apparatus of the national security state. The corporate/militarist government of the U.S. is paranoid by nature; therefore, the populace has good reason to be fearful.

It is not a lack of conviction that brings so much suffering to humanity; it is a lack of rigorous imagination. Rigorous imagination is not the same thing as a desperate need for belief or a tendency to become convinced of the reality of any notion that arrives in your head.

Rigorous imagination allows you to engage in democratic discourse with the disparate beings inhabiting the polis of your psyche, but not be swept away by mob rule or entranced by charismatic, neurotic, or paranoiac characters within you who have a monomaniacal agenda.

These inner characters, gods, animals, and monsters can be helpful to you; it is futile to attempt to repress them. But you must have a grip on them — or they will have a grip on you. Ergo, this is the difference between clinging to narrow convictions and a heart-opening, senses-awakening, mind-vivifying embrace of rigorous imagination.

Our convictions, beliefs, and motives have been formed from a mixture of apprehensions (sprung from seeds of bias) and misapprehensions (that contain a tiny measure of truth). Generally, what we term thinking and knowing is, more often than not, an autonomous process — an unconscious seeking of affinities — a mating dance of known quantities and recognizable possibilities allowing one to view the world as the unfolding of the plausible — a trek across recognizable, navigable terrain — and not a bewildering bog of proliferating novelty, lacking both familiar landmark and the lexicon of a known tongue.

As a people, what is our legacy to future generations? Depressing, isn’t it? Ecocide. Debt slavery. War without end. A social milieu in which privileged psychopaths not only thrive but decide the fate of the multitudes.

Let’s take a digressive scan of the known landscape of the late capitalist era where there exists a desperate campaign by the economic elite to have the floundering system be accepted as not only viable — but the only rational option available to all concerned. Yet a predominance of evidence stands to the contrary.

Withal, the present economic system can only maintain the illusion of viability — growing ever tenuous by the hour — by lurching from market bubble to market bubble, in combination with governmental infusions of trillions upon trillions of dollars, as well as the complicity of the corporate media and government officialdom in the swindle (swindles past and ongoing) by abandoning their roles as advocates for the many and assuming the position of operatives of a moneyed elite.

Whistleblowers, dissidents — all of those who harbor a proclivity to apprehend the true nature of the circumstances that the forces of self-serving power have wrought and ruthlessly strive to maintain — innately carry within and speak a language that is both alien and threatening to the status quo.

Opening oneself to one’s condition, even when the criteria is depressing, allows one to open a window to the verities of the heart and gaze upon a kind of beauty that is both awful and awe inspiring. Thus: One is called upon, regardless of the degree of success or the extent of failure, to attempt to align these visions as a corrective to culture.

Circumstances do not change unless perceptions change. Accordingly, the big lie promulgated by the elite of our corrupt era is … there is something wrong with an individual who will not or cannot accept their version of events.

On a personal basis, I am deficient in those qualities that would allow me to adapt to the conventions of our age. Yet, through it all, a mutant seed, nourished by the composting convictions of our culture, dreams within my soul, that contains a blueprint that will allow me to live my way into the unknowable future.

In the final years and the concomitant, violent death throes of the corporate/consumer paradigm, the compulsive pursuit of happiness brings the opposite effect: insatiable craving, chronic dissatisfaction, panic, paranoia, nettling resentment, burnout, and disillusionment. Instead, try this: embrace the inherent sorrow that comes at the end of things: The blank countenance of an indifferent winter sky; the spiraling dance of the ashes of prior convictions in a clashing cross breeze; the manner that trees, buildings, birds rise from the earth like musical notes.

You can attempt to check-out i.e., approach life, as people in the U.S. do, as virtuosos of reality avoidance — but reality knows your home address: the human psyche. Your psyche is with you for life. You cannot drop off your psyche at an Interstate rest stop, and drive away. Glance in the rear view mirror and it will be lounging in the backseat of your vehicle tapping its foot to the music swelling from the car radio.

You can no more discard the psyche than rid yourself of its organ of expression — the human heart — by storing it in a deep freeze. The images of the psyche pulse through your veins.

Neglect of the psyche causes it to become a thief in the night that, by stealth, steals back into consciousness, and is misapprehended as a home invasion of which, a private arsenal, no matter its degree of firepower, would prove of zero use in warding off.

It is anathema to the human heart for one to imagine oneself as being primarily an economic animal whose fate is yolked to the crackpot pragmatist’s bottom line-fetishizing mindset of late capitalist feudalism.

In contrast, by living among by conversing, collaborating, grappling being moved, mortified, and transfigured by the images dwelling in the polis and the ecosystem of my heart (also known as the imagination) — I become myself, by losing myself. The shackles of the first person singular have been lightened, allowing me to wend in the direction of my calling.

By means of rigorous imagination, one must seek collaboration with the figures populating the landscape of the psyche. Because: how is it possible to navigate the bewildering terrain of one’s fate alone?

“Handsomely equipped to fail, I went out into the world.” â€• John Fowles, from The Magus

Phil Rockstroh is a poet, lyricist and philosopher bard living in New York City. He may be contacted at: phil@philrockstroh.com  And at FaceBook: http://www.facebook.com/phil.rockstroh

3 comments for “Empire of Panic and Illusion”