Neocon propagandists are skilled at reframing current and historical events in ways that promote their ideological agenda. For them, it’s a case of the ends justify the “facts,” as happened again when Chuck Hagel dared praise President Eisenhower’s handling of the 1956 Suez crisis, ex-CIA analyst Paul R. Pillar notes.

Any suggestion that the United States should exercise tough love with Israel (as distinct from the soft, unconditional, even if unrequited, variety of love that instead prevails in American politics and policy) is bound to elicit immediate and vigorous responses.

It is thus no surprise that such responses were triggered by a recent column by David Ignatius that discussed how Secretary of Defense-designate Chuck Hagel admires Dwight Eisenhower and especially Eisenhower’s firm response (as described in a well-received book by historian David Nichols) to the Anglo-French-Israeli invasion of Egypt in 1956 that we know as the Suez crisis. Ignatius writes: 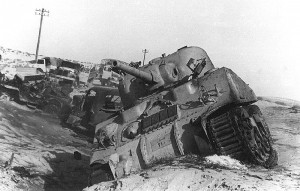 “It’s impossible to read Nichols’s book without thinking of recent tensions between the United States and Israel over the threat posed by Iran’s nuclear program. … What’s interesting about Eisenhower is that, while sympathetic to Israel’s defense needs, he was also determined to maintain an independent U.S. policy and avoid a war that might involve the Soviet Union.”

Given the well-deserved respect and admiration for Eisenhower, the suggestion that his strong rejection of the tripartite invasion at Suez 57 years ago holds policy lessons for today is dangerous stuff in the eyes of those who favor the unconditional, obeisant type of love.

Alexander Joffe and Michael Doran are two of those quick to respond by telling us: no, no, Nichols, Ignatius, Hagel and the rest of us are drawing the wrong lesson from the Suez crisis. Actually, Joffe’s and Doran’s responses demonstrate some other lessons about the uses, and misuses, of history.

A rather fundamental lesson concerns the importance of getting not only the facts but the sequence of facts right. I have commented before on how failure to do so is an all-too-common characteristic of policy discourse. Joffe fails to do so when he makes a statement such as: “Egypt’s economic warfare against Israel, including closure of the Suez Canal and Straits of Tiran, went unchallenged by the United States, which was courting Egyptian President Gamal Abdul Nasser.”

There certainly was U.S. courting of Nasser in the years and months preceding the summer of 1956. The biggest part of the courtship was an offer to finance the Aswan high dam. But the courtship was essentially over before Nasser’s actions that triggered the Suez crisis. The United States withdrew its offer of financing the dam one week before Nasser made the speech in which he spoke the codeword that was the signal to the Egyptian military to seize the canal. It was on the day of that speech, not before, that Nasser also closed the Straits of Tiran.

A misuse of history that both Joffe and Doran exhibit is to treat large swaths of policy as an undifferentiated lump and to evaluate the entire lump as either good or, as they both treat Eisenhower’s policy in the Middle East, bad. Joffe generally dumps on that policy, and Doran’s main point in his piece is that Eisenhower “came to regret those policies.”

Certainly there is plenty to criticize in the U.S. handling of Middle Eastern matters during that period and in the early Cold War thinking that underlay the policy. But neither Joffe or Doran zero in on Eisenhower’s stern rejection of the Anglo-French-Israeli invasion or why there was a problem with that particular aspect of U.S. policies in the region.

Much of what is regrettable, and has been regretted, from that swath of U.S. policy has to do with things other than Israel and Arab politics. The state of relations with the British and French were probably a more significant problem for the United States back then than relations with Israel.

Relations with the Europeans were already dicey. It was just two years earlier that John Foster Dulles had spoken of an “agonizing reappraisal” of U.S. policy toward the European powers after the plan for a European Defense Community fell apart, after a French rejection, which in turn had been heavily influenced by a British decision to stay out of the proposed community.

Other motivations and miscalculations of Dulles and Eisenhower had to do with matters other than the inter-Arab dynamics that Doran in particular emphasizes. The immediate peeve with Nasser that led to withdrawing the offer about the Aswan dam was not about Arab politics or the canal but instead about Egypt’s recognition of the People’s Republic of China. And the main U.S. miscalculation regarding the dam project was the mistaken belief that without U.S. sponsorship the project was too big for Egypt to pull off even with Soviet aid.

Both Joffe and Doran exhibit the post hoc ergo propter hoc fallacy by implying that what they describe as the failed state of U.S. policy in the Middle East by the end of the 1950s, with expanded Soviet influence and the 1958 coup in Iraq, somehow flowed from Eisenhower’s firm line on Suez. That is not credible.

It is hard to believe that a leader of Nasser’s charisma and rabble-rousing skill would have been any less able to stoke anti-Western Arab nationalism if the tripartite invasion had been allowed to stand. More likely, letting it stand would have made it even easier for him to do the stoking by providing an additional emotional cause about Western imperialism and subjugation of Arabs.

If there is any suggestion that smacking down Nasser during the Suez crisis would have nipped his nationalist cause in the bud, consider what happened 11 years later when he suffered a defeat that was even more humiliating, because it happened at the hand of Israelis unaided by any Europeans. When Nasser offered his resignation after the 1967 war, the popular response was tens of thousands of Egyptians swarming in the streets, expressing their love for Gamal and beseeching him (successfully) to remain in power.

As for the canal, does anyone think that if London and Paris had gotten their way in 1956 then ownership and control would have ceased to be a prominent issue (one readily exploitable by rabid Arab nationalists)? By way of comparison, the United States agreed in the 1970s to transfer ownership of the U.S.-built Panama Canal, a transfer completed in 1999.

When Joffe writes that a historical lesson one might draw is “how incommensurable promises to unreliable partners interested solely in extracting money and weapons from superpowers inevitably end in failure” I first thought he could be talking about Israel, but then, realizing that what Israel extracts from the United States is much more than money and weapons, he was probably talking about Egypt.

Doran writes that after the Suez crisis the United States “was paying a heavy price for having broken the only immutable rule of a realist foreign policy: Support your friends and punish your enemies.” I know no self-respecting realist thinkers who would phrase their outlook in terms anything like that. They would instead echo the words of one of Britain’s most astute, and realist, statesmen, Lord Palmerston, when he spoke of having no permanent friends or enemies, only permanent interests.

Doran states that part of that “heavy price” was that “when the United States became mired in Vietnam, Britain and France refused to help.” It is strange to hear the Vietnam War invoked in what purports to be a defense of realism. The most prominent academic realist of the day, Hans Morgenthau, was also one of the most prominent opponents of the U.S. intervention in Vietnam, and was well before the United States got “mired” there.

It also is strange to hear talk about getting help from France, which not many years before had finally extracted itself from a long, losing expedition in Indochina and was entitled to say “been there, done that”, and Britain, which in the late 1960s was trying to shed defense and military obligations “east of Suez” rather than taking new ones on.

Both Joffe and Doran fail to observe an important principle in applying lessons from history, which is to take account of things that have since changed as well as things that remain the same. In 1956 both the State of Israel (established in 1948) and Nasser’s regime (begun with a military coup in 1952) were young. Most of the problems that each would cause for the United States were still in the future.

Neither Joffe nor Doran makes any mention of the biggest change that would shape that future in the Middle East, which was the war in 1967 that led to Israeli occupations that continue to this day, with all of the highly charged issues about Israeli colonization and lack of a Palestinian state flowing from them. Doran dwells in a long-gone past when he talks about a Middle East in which amid a conflict between “status-quo Arab powers” and “revisionists” Israel was “more an asset than a liability.”

Perhaps in some alternate history, in which the 1967 war and the later occupation and everything associated with it never happened, that might be a sensible way to look at the Middle East. But in the real Middle East of today it is a fantasy. It is a fantasy in, for example, the current struggle between revisionists and a status-quo power in Syria, where, in words I quoted the other day from the Lebanese Daily Star, the Syrian people “are decidedly unenthusiastic about seeing Israel enter into the uprising against the regime of President Bashar Assad in any way, shape or form.”

The Anglo-French-Israeli invasion of Egypt in 1956 was a foolish scheme, based on deceit and rooted partly in pique and archaic colonial thinking in London and Paris. President Eisenhower was entirely correct in firmly opposing it.

And yes, as long as we heed lessons about the proper way to apply the lessons of history, that episode in the history of U.S. foreign policy does provide a useful input to thinking about how to handle some current Middle Eastern problems, especially ones that involve Israel.