The core challenge facing today’s U.S. political process is whether the daunting threats to the planet and its people can be addressed, responsibly and cooperatively. Another hope is that in building these solutions, America can break loose from the chains of soulless mediocrity, as Phil Rockstroh explains.

The repercussions of our acts the constructs that we create endure well past the dissolution of our convictions and desires. Our actions exist as living architecture that surrounds the breathing moment. Future generations will dwell in the world we erect, thought by thought, deed by deed.

And what if we construct an architecture of evasion and deception? What does such a place look like? If you live in the current-day U.S., take a perusal around you. 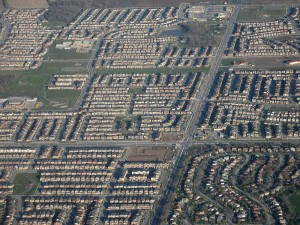 Take in our culture’s shoddily constructed, ugly, prefab, commercial structures its archipelago of strip malls, fast-food outlets, suburban, shit-box housing developments from gaudy McMansions to cookie-cutter track-houses. Glance at its corporate-state media, a self-perpetuating, self-referential dominion devoted to hype and hustle a 24/7, enveloping sales pitch contrived to evoke the misplaced fear and manic compulsion required to create an unquestioning desire to consume ever proliferating arrays of unneeded, commercial products, as, all the while, its soul-defying criteria is internalized and the system’s byproduct climate chaos roils land, sea and sky of our besieged planet.

This is the world we have made. We tend to believe that our present-day actions will pass into the shadow of memory, but they will remain in the world as ghostly architects of the future.

And this is where we stand, at present: We are transmigrating through a cultural landscape showing significant evidence of decline a collective, psychical wasteland, defined by media mirages, political legerdemain, and ecological devastation. We find ourselves in an era in which arrogance and cupidity are enthroned while the veracities of the heart wander in the wilderness.

Presently, cunning is lauded as a virtue, yet steadfast compassion is viewed as weakness. Our ancestors would have regarded our predicament as catastrophic a loss of soul thus making it imperative that the gods be appeased or else travail will follow travail. We know these spurned and vengeful gods as alienation, as displaced rage, desperate anomie, as cultural atomization, inertia and decay.

The latest electronic gadget will not bring you balm; your guns will not preserve you; and it is evident the nation’s political class will not assist us. How does one avoid being drowned in dumbness?

An inner conviction a deep-dwelling knowledge akin to grace exists within when your opinion on a matter aligns with the realities at hand. Often, one must stand against rising currents of worldly, wrongheaded opinion a cacophonous flood of stupid; a raging torrent of collective pathology.

This is when your own inner idiot and delusion-prone maniac can be of service to you. Ergo, you can think like your adversaries e.g., Smart can envisage Stupid and Crazy, but Stupid and Crazy cannot comprehend what is intelligent and sane. Thus, as surging tides of stupid crash upon you, you can breathe, with amphibian-like mutability, in the rarefied air of wit and knowledge, and you can breathe, as well, when immersed beneath the floodwaters of surging stupid and inundating insanity.

There are times when a bauble-bedazzled idiot can serve as a role model, because he knows how to surrender to the joys of his heart. But, because you are not an idiot, there is no need to surrender to idiocy. This evokes the question: What is it that I should give myself over to with idiotic abandon?

There is a vast difference between going supine before one’s oppressors and surrendering to the vast, ineffable order of the heart of creation. The task is ongoing and arduous, even, at times, terrifying.

It involves a drowning a baptism of sorts, but of the poetic (not fundamentalist) variety a washing away of calcified habit and a rebirth by an immersion in the embracing waters of a larger order one that is not defined by a compulsion for domination of the things of the world one cannot control.

“The aim of art is to represent not the outward appearance of things, but their inward significance.” â€• Aristotle

Subject to the status quo politics of late-stage capitalism, we find ourselves stranded in the era of The Great Dismal. Because a small cadre of elitist elements own the means of manufacturing and control of imagery and storyline, it is difficult to envisage the epic drama inherent to our circumstance.

As an example, the fate of the earth’s biosphere and its capacity to sustain human life is being subjected to an unfolding, desperate campaign craven as it is noxious in its intentions, scope and side effects, by the elite of an arrogant order to maintain their grip on privilege and power. By propaganda and coercion, they proceed, with cult-like conviction, on a course of catastrophic folly involving a race to secure and exploit the remaining resources of our ecologically taxed planet (the only planet available to us). If their agendas remain unchecked, the biosphere will be rendered unviable to our species.

In an era of urban alienation, suburban atomization, corporate-state domination of the public realm, and electronic-media saturation of the human psyche, in an era when desire is defined by consumer impulsiveness, individual liberty is circumscribed by debt, and freedom monitored by the dehumanizing apparatus of the national security state panopticon, one hears the lament I don’t even know how to go about embodying the truths of my heart How do I even begin to glide along the pollen path of my soul?

First ask yourself, how powerfully does the longing live with in you? Does it blaze through your blood? Does it bestow a love of life itself? Does it provide you with a love so potent that it allows you to even love the obstacles in your path? Do you love your adversaries like a Delta bluesman who wails in lamentation about the treachery of a dirty, lowdown betrayer?â€¨Notice this: It is the obstacles along your way that have given impetus to inspiration. The antidote is contained in the dragon’s venomous bite. Passion’s path winds through the monster of the world.

“I feel the beautiful, beating heart of God in the monster of the world.” — Federico GarcÃ­a Lorca

What did you expect a perpetual glide across eternal pools of bliss while lounging upon some kind of cosmic pool toy? There would only be a tinkling top to such music; it would be devoid of the heartbeat of an earthbound bottom the vital rhythm section of the monster’s heart.

Here at the crossroads of Eternity and the Living Moment, and near the last exit ramp of Empire’s End, the roadside attractions have become more than a bit empty and garish i.e., a Cracker Barrel of the bottomless cravings attendant to the marketing of counterfeit desires.

“What we speak becomes the house we live in.” — hafiz

Is it any wonder then, in the U.S., enmeshed as we are in the consumer paradigm of late capitalism, that we exist within a Landscape of Nada that is reflective of an inner Architecture of Nowhere? Sterile malls and ugly strip malls, big-box stores, fast-food outlets, convenience stores and agora-devoid subdivisions these flimsy, banal structures, we have conjured into existence by our hollow, poetry-devoid incantations.

Wasteland within. Wasteland extant. The word and the landscape are one.

So what is the Grail that will restore the dry, sterile landscape to fecundity? And whom does the Grail serve? And where can it be located? The question pertains both to where and to whom. The who in question is you. And the where is: the living landscape of your stalwart heart. The first step in allowing the wasteland to bloom is a reclamation of empathy and the embrace of imagination. Or else, all you hold dear will be rendered dust and ash and find dismal dominion in the indifferent winds of fate.

“Art evokes the mystery without which the world would not exist.”– Rene Magritte

We must sing the world back into vital and vivid being. The heart will awaken once the task has begun. Art bestows flesh on phantoms; music spins garments for reborn flesh.

“Music is a moral law. It gives soul to the universe, wings to the mind, flight to the imagination, and charm and gaiety to life and to everything.” — Plato

The Imagination is a charming seductress, an enchanter of harsh Verities. Baudelaire averred that when we love we have found a means of subsisting on the essence of invisible flowers. A sublime forgetting and relearning takes hold, as lovers take up residence in redolent air.

The act of looking upon the world as if it is the face of your beloved can serve to lift life’s burdens over grim landscapes, like Chagall’s lovers wafting over dour, quotidian rooftops, beneath which squat the compulsive folly of foolishly earnest men.

Bring an end to the Empire of Endless Burgers by giving voice to inspiration. Bring down the walls of airless, gated subdivisions of the mind with the heart’s reverberant soundscape. Without your voice, nothing is possible, and nowhere is where you are bound. Therefore, the only sound choice becomes … to arrive singing.

Words, Phrases, Sentences they are more than simply verbal constructs. They are living things the progeny of the union of the image-plangent soul of earth and sea and the holy spirit’s lambent, inhuman illuminations. We know them as the dance of affinities attendant to the mating rituals of eros and logos the Word and Flesh made one.

At paradigm’s end, buffeted and shaken yet held enthralled within the maelstrom by the vast and sweeping scope of unsolvable governmental/cultural forces we feel the pull of a gravity that feels akin to love. We yearn for some remedy, like lovers whose blazing love threatens to burn away all their moorings and upend all they know.

Thus, rejoice in this: There is rebirth, dwelling deep, in the irreparable problem we know as the world. Find solace in the knowledge that poets (who should not be imagined as an elitist covenant of the elect but those who have chosen to avail their hearts to the art of living in a poetic manner) are out there now: wounded by beauty; indentured to logos.

And even when exploring our current day wilderness of alienation, poets are laboring to limn a psychical map of its terrain of terror and beauty. All who live pass through this soul-plangent landscape. Know this: It is an illusion that you have ever been alone, even within the nadascape comprising The Great Dismal of the current era.

“Real generosity towards the future lies in giving all to the present.”  — Albert Camus:

← Finally, the Republicans Are Afraid
Denying Palestinians a Voice →