Exclusive: House Speaker John Boehner warned his fellow Republicans that President Obama may be preparing “to annihilate” the GOP, surely an overly dramatic claim but one that marks a stunning reversal of fortune for swaggering Republicans who once dreamt of their own one-party state, says Robert Parry.

For anyone who has lived through the past several decades of Republican bullying from Richard Nixon’s anything-goes politics through Karl Rove’s dreams of a “permanent Republican majority” it had to be startling to hear House Speaker John Boehner complaining that President Barack Obama’s goal was “to annihilate” the GOP.

During a private luncheonof the Republican Ripon Society on Tuesday, Boehner cited Obama’s progressive agenda as outlined in his Second Inaugural Address as representing an existential threat to the GOP. 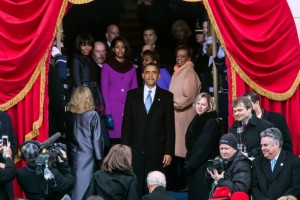 President Barack Obama, after giving his Second Inaugural Address on Jan. 21, 2013, paused as he reentered the U.S. Capitol to look out once more at the vast throng of supporters filling the Mall. He remarked, “I’m not going to see this again.” (White House photo)

“It’s pretty clear to me that he knows he can’t do any of that as long as the House is controlled by Republicans,” Boehner said. “So we’re expecting over the next 22 months to be the focus of this administration as they attempt to annihilate the Republican Party.” The Ohio Republican also claimed that it was Obama’s goal “to just shove us into the dustbin of history.”

Of course, Boehner may be wildly exaggerating the Republican plight to shock the party out of its funk, raise more money, and get right-wing activists back to the barricades. Still, his comments marked a remarkable reversal of fortune, like the playground bully getting his nose bloodied and running to the teacher in tears.

Even if hyped from political effect, Boehner’s lament also might force some progressives to rethink their negative views about President Obama. If indeed Obama has gotten the upper hand on America’s swaggering Right, then he might not be the political wimp that many on the Left have pegged him to be.

Without doubt, America’s political landscape has shifted from what it was just eight years ago when President George W. Bush was talking about using his political capital to privatize Social Security and Bush’s political guru, Karl Rove, was contemplating an enduring Republican control of all three branches of the U.S. government.

As part of that Zeitgeist of 2005, as Bush entered his second term, right-wing activist Grover Norquist joked about keeping the Democrats around as neutered farm animals. The president of Americans for Tax Reform most famous for getting Republicans to pledge never to raise taxes told the Washington Post that congressional Democrats should grow accustomed to having no power and no reproductive ability.

“Once the minority of House and Senate are comfortable in their minority status, they will have no problem socializing with the Republicans,” Norquist said. “Any farmer will tell you that certain animals run around and are unpleasant. But when they’ve been ‘fixed,’ then they are happy and sedate. They are contented and cheerful.”

How We Got There

That moment of right-wing arrogance represented a culmination of decades of hardball Republican politics, a take-no-prisoners style that usually encountered only the softest of responses from the Democrats and progressives.

Arguably the pattern was set in fall 1968 when President Lyndon Johnson learned that GOP presidential nominee Nixon was sabotaging the Vietnam peace talks to ensure his victory over Vice President Hubert Humphrey but Johnson stayed silent about what he called Nixon’s “treason” out of concern that its exposure would not be “good for the country.” [See Robert Parry’s America’s Stolen Narrative.]

Nixon’s success in 1968 and the Democratic silence contributed to his decision several years later to create an extra-legal intelligence unit to spy on and undermine the Democrats heading into Election 1972. Finally, Nixon’s political chicanery undid him when his team of burglars was arrested inside the Democratic National Committee in the Watergate building. The resulting scandal led to his resignation in 1974.

But the Republican response to Watergate wasn’t to mend the party’s ways but rather to learn how to protect against ever again being held accountable. That reality became the political back story of the next three decades, as the Right built up a fearsome media apparatus and deployed well-funded operatives to shield Republicans and to discredit anyone who presented a threat, whether untamed Democrats, nosy reporters or average citizens.

This Right-Wing Machine showed off its value during the 1980s and early 1990s when President Ronald Reagan and Vice President George H.W. Bush were caught up in the Iran-Contra national security scandal but succeeded in skating away with only minimal political damage. Instead of Reagan and Bush being held accountable for their crimes, far worse damage was inflicted on the careers of investigators, journalists and witnesses who tried to expose the wrongdoing.

Within this political/media framework, when Democrats did win elections, Republicans immediately demeaned them as illegitimate interlopers. For instance, Bill Clinton’s electoral victory in 1992 was an opportunity for the Right-Wing Machine to demonstrate that it could play offense as well as defense, tying up Clinton’s presidency endlessly in trivial “scandals” and setting the stage for the GOP congressional comeback in 1994.

Over those decades, the Republicans behaved as if national power was their birthright. In Election 2000, they saw nothing wrong with aggressively disrupting the recount in Florida, both with rioters on the ground and partisan justices on the U.S. Supreme Court. It didn’t matter that Vice President Al Gore had won the nation’s popular vote and would have carried Florida if all legal ballots were counted. What mattered was putting a Republican in the White House by whatever means necessary. [For details, see Neck Deep.]

After the 9/11 attacks, even as Democrats set aside partisan concerns to support President George W. Bush’s response to the crisis, Bush and the Republicans painted the Democrats as “soft on terror” and unpatriotic. The GOP did whatever it took to expand and solidify power.

In 2004, the Republicans and the Right went so far as to portray Democratic presidential nominee John Kerry as a fake Vietnam War hero. GOP activists even mocked his war wounds by passing out “Purple Heart Band-Aids” at the Republican National Convention.

Then, after Bush rode his post-9/11 reputation as a “war president” to a second term, Republican operatives like Rove and Norquist saw their moment for making their political power permanent, in effect turning the United States into a one-party state with the Democrats kept around for the necessary cosmetics of a “democracy.” The GOP would use its money, its media and its control of the judicial process to make successful electoral challenges unthinkable.

But 2005 instead turned out to be the GOP’s high-water mark, a time of premature celebration, the last moment of sunlight before the arrival of darkening clouds, or in this case, the American people’s realization that the Right’s anti-government extremism mixed with the neocons’ imperialist wars was a recipe for disaster.

Bush’s inept handling of Hurricane Katrina and the devastation that it inflicted along the Gulf of Mexico showed the downside of a hollowed-out federal government. And the bloody stalemate in Iraq revealed the dangers of ill-conceived military adventures.

Bush’s tax-cutting and deregulation produced other harmful consequences, including soaring federal deficits, rising income inequality, an eroding middle class and an unstable “bubble” economy that finally burst in 2008. The electorate’s recognition of Bush’s failures led to Democratic victories, including Obama’s election as President.

Yet, despite the extraordinary national crisis that Bush left behind millions of Americans losing their jobs and their homes as well as two unfinished wars the Republicans refused to play the role of “loyal opposition.” They pulled out their successful playbook from the early Clinton years and confronted Obama with unrelenting hostility.

Once again, the obstructionist strategy worked at least in a narrow political sense. By mid-2009, Glenn Beck, Rush Limbaugh and other loud voices from the muscular Right-Wing Machine had whipped up a passionate Tea Party opposition to Obama, including crypto-racist allegations that the President was born in Kenya, despite the evidence of birth records in Hawaii.

Meanwhile, America’s weak and disorganized Left mostly complained that Obama hadn’t delivered on everything that he should have. For his part, Obama squandered valuable time reaching out for a bipartisanship that never came, and the mainstream news media faulted him anyway for failing to achieve that bipartisanship.

So, the Right surged to electoral victories in 2010. Republicans reclaimed the House and seized control of many state governments. Senior Republicans, including Senate Minority Leader Mitch McConnell, openly declared that their top priority would be to ensure Obama’s failure as President and his defeat in 2012. Part of the Republican strategy to reclaim national power was to disenfranchise blacks and other minorities by creating obstacle courses of legal impediments to voting, such as onerous voter ID laws and reduced hours.

Many top GOP operatives, including Rove, remained confident of success as late as Election Night 2012, expecting Mitt Romney to unseat Barack Obama. However, Democrats blocked many of the voter-suppression schemes and Obama marshaled an unprecedented coalition of African-Americans, Hispanics, Asian-Americans, women and the young to decisively defeat Romney.

In Congress, Democrats strengthened their control of the Senate and narrowed the Republican majority in the House. That GOP majority was retained only because Republicans had gerrymandered districts after the 2010 elections enabling the party to keep most seats despite losing the popular vote nationally.

During his Second Inaugural Address, Obama also made clear that he had finally forsaken the “inside game” of trying to sweet talk the Republicans into cooperation or negotiating from positions of weakness. Instead, Obama delivered a strong defense of American progressivism. He tied that tradition to the ideals of the Framers who wrote the Constitution with the intent of creating a vibrant Republic, a government of, by and for the people.

Obama’s speech and its warm reception apparently unnerved Speaker Boehner who suddenly saw something akin to an existential threat to the GOP. There were the painful election results, the nation’s shifting demographics, the newly assertive President, and hundreds of thousands of Americans again packing the Mall to celebrate Obama’s victory.

After his Inaugural Address as he stepped back into the U.S. Capitol, President Obama paused, turned around and looked back at the throngs of people waving American flags as far as the eye could see. He said wistfully, “I’m not going to see this again.”

From his seat in the Inaugural reviewing stands, Speaker Boehner saw the same impressive scene, and he may have grasped its implicit message. The large and diverse crowd personified the Obama coalition — and the mortal threat that it represents to traditional American politics, always dominated by white men of means.

Of course, the Republicans still have the Right-Wing Machine churning out propaganda to rally the party’s angry white-male base. Plus, the GOP is coming up with more new plans for minimizing the votes of black and brown people and maximizing the political clout of whites, such as a scheme in several states to apportion presidential electors based on the Republicans’ gerrymandered congressional districts.

But Boehner seems to sense that something fundamental has changed. Perhaps he was playacting a bit when he warned fellow Republicans that Obama hoped to “annihilate” the Republican Party. But overdramatized or not Boehner’s alarm suggests that finally it is the Republicans who are afraid.

33 comments for “Finally, the Republicans Are Afraid”