Here we go again, another unstable Muslim-majority country wracked by violence and the excesses of Islamic extremists, and another round of anguishing over what the United States can do to keep the extremists from gaining more ground.

We have been through this, or are still going through this, in Afghanistan, in northwest Pakistan, and in Yemen. And that’s in addition to places where similar issues were enveloped within a struggle to depose a secular dictator, as in Libya and Syria. Now the latest Islamic extremist threat-of-the-month is in Mali. 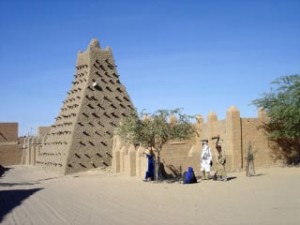 The historic Sankore Mosque in Timbuktu, one of the cities in northern Mali under the control of Islamist extremists. (Photo credit: Senani P)

These situations tug at our heartstrings, or our interventionist impulses, in several ways, including understandable abhorrence over what the extremist elements involved may regard as their idea of strict enforcement of Sharia but look more to us like abuses of human rights or even atrocities.

In contemplating what, if anything, to do about such a situation we need a clear-headed, heartstring-free concept of what U.S. interests, if any, are involved. Just as important, we need to examine carefully the feasibility and cost of what can be done before succumbing to the urge to do something.

Regarding Mali the United States has the luxury at least for now of deferring to its ally France to do the heavy lifting. That is appropriate, and consistent with how France has used military force from time to time in its former African colonies whenever one of its clients there has run into a bit of trouble.

But any further discussion of what else the United States might do needs to look more critically at one of the most frequently voiced notions that is applied to such situations and that certainly has been applied a lot lately to Mali: the idea that the United States has a major need to prevent the country from becoming a “launchpad for terrorism,” or, as the U.S. Secretary of Defense put it, that the United States has a “responsibility to make sure al-Qaeda does not establish a base of operations” there. There are several problems with that notion.

One is that it mistakenly treats terrorist threats to the United States as if they were the product of some conquering imperial power that sweeps across continents like the Golden Horde. Or, because we are in the vicinity of North Africa, it is the kind of thinking that was an understandable response to Germany’s invasion of that region in World War II, seen as a threat to Egypt and the British Empire’s lines of communication to South Asia.

We inappropriately apply the same kind of thinking to terrorism, which is a tactic and not an empire, partly because of a general tendency to think in spatial terms. Habitual and loose use of the label “al-Qaeda” also reifies a single global terrorist organization that does not really exist, as distinct from collections of groups that have adopted the al-Qaeda name or pieces of its ideology.

Then there is the issue of how the United States figures into this as a terrorist target. No doubt about it, the groups involved in these places are anti-U.S., as well as being violent and ruthless. But their principal goals are tied to local conditions and ambitions.

Secretary Panetta downplayed this reality when he said this week that although the Islamist groups in northern Mali may not post an immediate threat to the United States, “ultimately that remains their objective.”

There simply is no basis for declaring that the ultimate objective of bands of fanatics brutally imposing their will on a remote patch of the Sahel is centered on the United States. That was not even true of the ideological symbol of transnational Islamist terrorism, Osama bin Laden himself, for whom attacking the far enemy of the United States was only a means for getting at his near enemies in the Middle East.

Another problem is suggested by the serial nature of these Islamist trouble spots, coming one after another. Or as Secretary Panetta put it, the United States “has a responsibility to go after al-Qaeda wherever they are,” including Pakistan, Yemen, Somalia and North Africa.

Beginning with Afghanistan, each place was supposed to hold unique danger as a potential base for transnational terrorists. But the very fact there are several such places means none of them is unique. If terrorists really need a geographic base, it does not have to be in Mali or any other particular spot.

Then there is the question of how much the control of any patch of remote real estate has to do with the degree of terrorist threat that a group poses to the United States. The record of preparation of previous terrorist attacks suggests it is one of the less important factors.

Furthermore, even if a terrorist group did rely on something as well-established as a training camp, there is the further question of how any such physical presence relates to political control of the larger territory in which it is located. Much commentary has noted how large and sparsely populated is the northern part of Mali where the latest bunch of extremists has been operating,twice the size of Germany was one comparison.

Whether some group has a camp somewhere in that vastness is unlikely to depend much on who is the sovereign over that territory.

5 comments for “Mali and the Lure of Intervention”