The Israel Lobby is taking aim at another prospective Obama administration appointee deemed insufficiently supportive of Israel’s Likud policies, ex-Nebraska Republican Sen. Chuck Hagel. A similar campaign of vilification was waged against Ambassador Chas Freeman in 2009, as he recalls.

History is indeed repeating itself with Sen. Chuck Hagel; this time, as Marx predicted, as farce. All of the elements I noted in my statement of withdrawal in 2009 are there:

“The tactics of the Israel Lobby plumb the depths of dishonor and indecency and include character assassination, selective misquotation, the willful distortion of the record, the fabrication of falsehoods, and an utter disregard for the truth. The aim of this Lobby is control of the policy process through the exercise of a veto over the appointment of people who dispute the wisdom of its views, the substitution of political correctness for analysis, and the exclusion of any and all options for decision by Americans and our government other than those that it favors.” 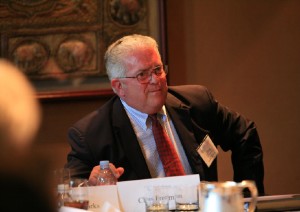 None of this has changed, including the effort to make the campaign appear to be about something other than obeisance to Israel. (China in my case; so far gay rights, with more likely to come, in Sen. Hagel’s.) [For details, see Consortiumnews.com’s “Hagel: Neocons’ Last Stand?”]

There are some differences, however. I had been appointed. Hagel has not yet been nominated. Unlike Secretary of Defense, the head of the National Intelligence Council is not subject to Senate confirmation. If nominated, Sen. Hagel faces hearings in which he has the opportunity to clear his name and a process of voting in which politicians must take a stand rather than hide behind the Lobby.

The Secretary of Defense is a policy official, the head of the NIC is responsible for analytical input but not for policy decisions. The NIC is a subcabinet position, with a supervisor who reports to the President. The Secretary of Defense has no superior other than the President, who cannot disclaim responsibility or leave the decision whether to stand or fight to a subordinate.

Finally, Sen. Hagel appears actively to want to return to government service. I agreed only reluctantly to do so. Sen. Hagel’s appointment as Secretary of Defense would cap an honorable political career by elevating him to higher office. My return to government at the same level as my last position in it would have been an invisible afterward to 30 years of dignified but obscure public service.

The stakes seem at first glance to be surprisingly similar. In 2009, I noted that “the outrageous agitation   [over my appointment casts] doubt on [the President’s] ability to consider, let alone decide what policies might best serve the interests of the United States rather than those of a Lobby intent on enforcing the will and interests of a foreign government.”

As I and others foresaw, my defeat was the first of many setbacks to Obama’s declared objective of righting U.S. policies in the Middle East and repairing our relations with the Muslim world.

The controversy over my appointment also politicized appointments to the intelligence community. But that over Hagel is far more important and potentially far-reaching in its effects. It threatens to extend the process of “borking” from the Supreme Court to the Cabinet appointment process and, if it appears to deter the President from nominating Hagel, it will confirm the domestic and international impression of President Obama as someone who confuses following from the front with leadership and who habitually yields rather than stands his ground.

Given the domestic political gridlock and constant retreat before AIPAC that characterized his first term, President Obama and the United States currently have very little credibility in the Middle East. Even without the impact of a fall off the “fiscal cliff,” starting a second term with yet another humiliation by the Israel Lobby would devalue Obama and American prestige for at least the next four years, leaving us at the mercy of decisions by others that we cannot influence.

Sen. Hagel is drawing on conservative political colleagues to defend himself. Much as I sympathize with what he’s going through, it seems best not to taint his case by appearing to wish to reopen my own.

Those opposing him are making arguments that demonstrate their obsession with Israel at the expense of all other American interests. In the process, they are isolating themselves by offending a widening circle of thoughtful American patriots. Their effective abetment of self-destructive impulses in Israel has helped to create an ever more potent existential threat to that country. Their hubris now threatens their credibility here.

Napoleon wisely said that one should never interrupt the enemy when he is making a mistake. These people are enemies of Israel as well as all that is decent in this country. Enough said.

Charles W. “Chas” Freeman Jr. had a 30-year career in the U.S. Foreign Service, the State Department and the Defense Department, including a stint as U.S. Ambassador to Saudi Arabia from 1989 to 1992. In February 2009, he was named by Director of National Intelligence Dennis Blair to chair the National Intelligence Council. But appointment was withdrawn after several weeks of intense criticism from staunch supporters of Israeli policy. [This post derived from an e-mail exchange with ex-CIA analyst Ray McGovern and was posted with Ambassador Freeman’s approval as well as at LobeLog.com.]