Susan Rice’s possible promotion from U.S. Ambassador to the UN to Secretary of State continues to come under fire, now over her apparent conflicts of interest with African clients from her days as a private consultant, notes ex-CIA analyst Paul R. Pillar.

It is difficult to remember the last time a not-yet-and-maybe-never-secretary-designate of some cabinet department got as much preemptive opposition as Susan Rice has been getting regarding the job of Secretary of State.

One of the lines of criticism, highlighted by Helene Cooper in the New York Times, concerns Rice’s coziness with some African strongmen and in particular with Rwandan president Paul Kagame. A specific twist regarding Kagame is that he was Rice’s client when she worked between government stints at Intellibridge, a consulting firm that also provided other former Clinton administration officials with out-of-government employment. 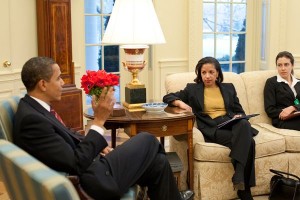 It is hard for an outsider to judge whether Rice’s handling of African issues at the United Nations since she came back into government has represented a compromise of integrity and, if so, how U.S. diplomacy may have suffered. There does seem to be a pattern of Rice wanting to go easy on Kagame, notwithstanding his government very likely being the principal backer of rebels who are causing the latest round of havoc in eastern Congo.

But Rice’s supporters argue that a behind-the-scenes approach is more likely than public castigation of Kagame’s government to ameliorate the mess in the Great Lakes region of Africa. The sorts of attributes of Rice and her record that Jacob Heilbrunn has identified are probably more important in assessing whether she is qualified to be Secretary of State.

The past dealings with the Rwandans are a legitimate issue, however, and illustrate a problem with appointees that goes far beyond Rice. A distinctive feature of the U.S. system of government is the installation, with the advent of each new presidential administration, of a huge number of political appointees, thousands of them, going far below the level of cabinet secretaries. This system has several problems.

The system entails great disruption and persistent vacancies with each change of administration. The system means that the staffing of much of the government is determined in large part by who happened to play most successfully during the primary campaign season the game of hitching one’s wagon to a rising star.

Rice’s attachment to Kagame’s government illustrates yet another problem, which is the baggage that in-and-outers may acquire during periods that they are out of government. Different types of jobs entail different degrees and types of baggage problems.

What is most often thought of are financial interests left over from some lucrative private-sector employment, although problems related to that can be ameliorated through arrangements such as blind trusts. Probably harder to deal with is the legacy of the kind of relationship Rice had with Kagame.

Consulting firms whose shingles feature former senior officials who recently left office are selling influence and access at least as much as they are selling expert advice. Relationships that are ones of advocacy, trust, and taking action on behalf of the client’s interests are not relationships that can be turned on and off like a light switch.

The political systems of most other advanced democracies avoid most of these problems. The top national layer in those systems is peopled by a small political class that includes ministers who sit in cabinets and who, to do so, must subject themselves to a vote of the electorate.

Below them is a professional bureaucracy, part of whose defining characteristic (Japan is a conspicuous exception) is a commitment to execute faithfully the policies of whichever political masters are currently in office. The bureaucrats do not try to inject their own policies, and they do not acquire baggage from stints outside government.