The anti-Arab racism that increasingly pervades modern Israel surfaces in the non-human images applied to Palestinians, such as the metaphor “mowing the grass” when targeting militants in Gaza. This tragic development traces back to the attitudes of old European imperialism, argues Lawrence Davidson.

By the middle of the 19th Century, the multi-ethnic empire was on its way out as the dominant political paradigm in Europe. Replacing it was the nation-state, a political form which allowed the concentration of ethnic groups within their own political borders.

This, in turn, formed cultural and “racial” incubators for an “us (superior) vs. them (inferior)” nationalism that would underpin most of the West’s future wars. Many of these nation states were also imperial powers expanding across the globe and, of course, their state-based chauvinistic outlook went with them. 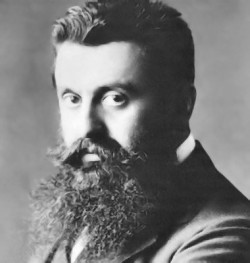 Zionism was born in this milieu of nationalism and imperialism, both of which left an indelible mark on the character and ambitions of the Israeli state. The conviction of Theodor Herzl, modern Zionism’s founding father, was that the centuries of anti-Semitism were proof positive that Europe’s Jews could not be assimilated into mainstream Western society. They could only be safe if they possessed a nation state of their own.

This conviction also reflected the European imperial sentiments of the day. The founders of modern Zionism were both Jews and Europeans, and (as such) had acquired the West’s cultural sense of superiority in relation to non-Europeans.

This sense of superiority would play an important role when a deal (the Balfour Declaration) was struck in 1917 between the World Zionist Organization and the British Government. The deal stipulated that, in exchange for Zionist support for the British war effort (World War I was in progress), the British would (assuming victory) help create a “Jewish national home” in Palestine. It was no oversight that neither side in this bargain gave much thought to the Palestinian native population.

Years later, beginning in 1945 (at the end of World War II), the British were forced to officially give up the imperial point of view. They came out of the war with a population burdened by extraordinary high war taxes.

Retaining the empire would keep those taxes high and so the British voter elected politicians who would transform the empire into a commonwealth, granting independence to just about all the Britain’s overseas territories. One of those territories was Palestine.

It is interesting to note that in other European colonies, where large numbers of Europeans resided, the era following World War II saw their eventual evacuation as power shifted over to the natives. Kenya and Algeria are examples which show that this process was hard and bloody, but it happened.

And when it did happen, the official imperial mind set was defeated. That does not mean that all Europeans (or Westerners) saw the light and ceased to be racists, but that their governments eventually saw the necessity to stop acting that way.

Unfortunately, in the case of Palestine, this process of de-colonization never occurred.  In this case the European colonists did not want the imperial mother country to stay and protect them. They wanted them out so they could set up shop on their own. They got their chance after the British evacuated in 1947.

Soon thereafter, the Zionists began executing a prepared plan to conquer the “Holy Land” and chase away or subjugate the native population. And what of that imperial point of view which saw the European as superior and the native as inferior? This became institutionalized in the practices of the new Israeli state.

That made Israel one of the very few (the other being apartheid South Africa) self-identified “Western” nation states to continue to implement old-style imperial policies:  they discriminated against the Palestinian population in every way imaginable, pushed them into enclosed areas of concentration and sought to control their lives in great detail.

If one wants to know what this meant for the evolving character of Israel’s citizenry who now would live out the colonial drama as an imperial power in their own right, one might take a look at a book by Sven Lindqvist entitled Exterminate All The Brutes (New Press 1996). This work convincingly shows that lording it over often resisting native peoples, debasing and humiliating them, regularly killing or otherwise punishing them when they protest, leads the colonials to develop genocidal yearnings.

There is evidence that the Zionists who created and now sustain Israel suffer from this process. For a long time Israeli government officials tried genocide via a thought experiment. They went about asserting that the Palestinians did not exist.

The most famous case of this was Israeli Prime Minister Golda Meir, who on June 15, 1969, claimed that “there were no such thing as Palestinians. They do not exist.”  One of the reasons she gave for this opinion was that the Arabs of Palestine never had their own nation state.

Others took a different approach by denying not so much the existence of Palestinians, but rather their humanity. At various times and in various contexts, usually in response to acts of  resistance against occupation, Israeli leaders have referred to the Palestinians as “beasts walking on two legs” (Menachem Begin); “grasshoppers” (Yitzhaq Shamir); “crocodiles” (Ehud Barak); and “cockroaches” (Rafael Eitan).

Of course, these sentiments were not confined to the Israeli leadership. They soon pervaded most of the Zionist population because the old imperial superiority-inferiority propaganda had become a core element of their basic education. The Israelis have taught their children the imperial point of view, augmented it with biased media reporting, labeled the inevitable resistance offered by the Palestinians as anti-Semitism and took it as proof of the need to suppress and control this population of “Others.”

And, from the Zionist standpoint, this entire process has worked remarkably well.  Today all but a handful of Israeli Jews dislike and fear the people they conquered and displaced. They wish they would go away. And, when their resistance gets just a bit too much to bear, they are now quite willing to see them put out of the way.

Thus, during the latest round of resistance rocket fire from Gaza and the vengeful killing that came from the Israeli side, we heard the following: “We must blow Gaza back to the Middle Ages destroying all the infrastructure including roads and water” (Eli Yishai, present Deputy Prime Minister); “There should be no electricity in Gaza, no gasoline or moving vehicles, nothing. We need to flatten entire neighborhoods … flatten all of Gaza” (journalist Gilad Sharon in the Jerusalem Post); “There are no innocents in Gaza. Mow them down … kill the Gazans without thought or mercy.”  (Michael Ben-Ari, member of the Knesset); Gaza should be “bombed so hard the population has to flee into Egypt” (Israel Katz, present Minister of Transportation); Gaza should be “wiped clean with bombs” (Avi Dichter, present Minister of Home Front Defense); Israeli soldiers must “learn from the Syrians how to slaughter the enemy” (prominent Israeli Rabbi Yaakov Yosef).

Finally, there were the numerous, spontaneous demonstrations of ordinary Israeli citizens, both in the north and south of the country, where could be heard chants and shouts such as “They don’t deserve to live. They need to die. May your children die. Kick out all the Arabs.”

If it wasn’t for the fact that the outside world was watching, there can be little doubt that the famed Israeli armed forces would have been tempted to do all that these ministers, clerics and citizens wished. After Prime Minister Netanyahu agreed to a cease-fire, a group of Israeli soldiers showed their frustration by using their bodies to spell out (in Hebrew) the words “Bibi Loser” (Bibi is a nickname for Netanyahu).

It was a pre-arranged photo-op and the picture can now easily be found on the Web. What seems to really irk the Israeli citizenry is not that Bibi killed and maimed too many innocent Palestinian civilians, but rather that he did not kill and maim enough of them to grant Israelis “safety and security.”

Throughout history it has been standard operating procedure to demonize those you fight and demote to inferior status those you conquer. But as Lindqvist’s work shows, there was something different about the way Europeans went about this business. The deeply racist outlook that underlay modern imperialism made it particularly perverse.

Now that apartheid South Africa is no more, the Israelis are the last surviving heirs to that dreadful heritage. So much for a “light unto the nations.” That proposition has quite failed. Wherever the Israelis and their Zionist cohorts are leading us, it is not into the light, it is to someplace very very dark.

← Ignoring the Global Warming Reality
The Humiliation of Bradley Manning →