Even as the science and reality of global warming becomes painfully clear, some of the U.S. political/media class pretends it’s all a myth and that the important thing is to “drill, baby, drill.” But that rejection of empirical data is being challenged by international groups and grassroots movements, notes William Boardman.

Based on the same publicly available scientific information, the World Bank issues a report calling for prompt action to ward off global warming, a coalition of the world’s largest investors calls on governments to act promptly to ward off global warming, the United Nations reports that greenhouse gas levels reached a new record and 18 United States senators (nine from each party) write a letter to President Obama calling on him to approve expanded fossil fuel exploitation without regard for global warming.

At the same time, students at Harvard are voting to divest from fossil fuels, and grassroots groups from British Columbia to Palm Beach, Florida, to London are demonstrating in solidarity with the Tar Sands Blockade in East Texas, where that two months long non-violent direct action is aimed at stopping construction of the Keystone XL Pipeline that is designed to set off “the biggest carbon bombon the planet” (the Canadian tar sands), amplifying the catastrophic impact of global warming. 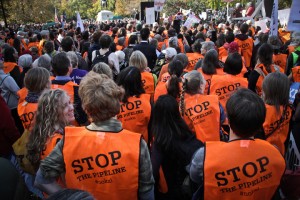 On Nov. 18, thousands of demonstrators paraded around the White House, calling on the President to block the Keystone XL pipeline, only to get more coverage from Canadian media than American media, where little was heard from the mainstream that was busy pursuing the possible departure of Twinkies. (CNN was an exception.)

The current focal point for all these activities is the TransCanada construction project in East Texas, where the Tar Sands Blockade has been stepping up its tactics to slow the pipeline’s progress or as UPI reports it: “Protests mar Keystone XL build in Texas” over a story that makes no effort to sort out facts from claims.

When President Obama put the northern section of the Keystone Pipeline on hold last March, he also signaled his bureaucracy to let the southern leg begin. TransCanada began construction last August and when the work crossed into Texas in September, the Tar Sands Blockade set up a treehouse network with nine tree-sitters in the right-of-way for the pipeline, vowing to block construction until the pipeline was cancelled.

The White House is expected to decide whether Keystone XL can be built sometime in the next month or so, and all it takes to proceed is a presidential signature. For President Obama, this decision will be a clear signal defining his real priorities: stopping the rise of the oceans and healing the planet, as he campaigned, or settling for short-term economic gains with unknown long-term consequences.

In Nacogdoches, Texas, the current front line between the Tar Sands Blockade and TransCanada’s construction workers and private police, the blockaders have been surprised by the appearance of a new ally the Austin Heights Baptist Church that has extended hospitality to the protesters. The story reported by The Baptist Standard included these passages:

“Our earth-care ministry group has been involved for years in environmental projects ,recycling, environmental education discussion groups, looking at how our church can reduce its carbon footprint,” Pastor Kyle Childress said.

“These are mostly kids in their 20s who are a long way from home. There are a few Texans, but most are from out-of-state, places like New York, California and Chicago. They are urban, secular young people for the most part,” Childress said. “A handful of them are churchgoing Christians, but most aren’t. Most see the church as part of the problem.”

The article added: “During one encounter, Childress talked to a 20-something protester about the pressure many churches feel to incorporate the latest technology into worship in order to appeal to young people. ‘He told me, “If more churches were on the front lines of things that matter, they wouldn’t have any problem getting young people to church.”’”

On Nov. 19, over 100 protesters stepped up their non-violent efforts to slow construction, shutting down two sites for most of the day. Local police also stepped up their violent tactics to remove the protesters, eventually arresting 11.

The following day, responding in part to police violence, local supporters in Nacogdoches joined with blockaders for a rally and candlelight vigil at Cherokee County Jail, where some protesters were held with high bail on felony charges. Combined bail for the 11 arrested is $132,250.

One reason for strong local support from Nacogdoches is that Keystone XL threatens local water resources. According to a Tar Sands Blockade news release:

“Today’s Day of Action [Nov. 19] is in solidarity with local landowners struggling to protect their water and land from TransCanada’s toxic tar sands pipeline. Keystone XL would cross 16 large rivers in Texas, including the site of today’s latest tree blockade, the scenic Angelina River.

“Nestled amongst 50 foot pine trees in forested bottomlands, the tree blockaders have settled in for a long standoff in protection of their fresh drinking and agricultural water. The waters downstream feed into the popular Sam Rayburn Reservoir, the largest lake entirely within the state of Texas, renowned for its angling opportunities and competitions.”

The 18 U.S. senators, who urged the President to approve the Keystone pipeline as soon as possible, include nine Democrats and nine Republicans, mostly from coal-and-oil-producing states. They are:

Despite the clear-cut climate science available to them, whether they’ve looked at it or not, they’ve decided that it’s in the best interest of the United States to ask the President to take an action that will jeopardize the future of humanity.

Their rationale, as Investors.com puts it, with two false assertions to support the conclusion: “Climate change is an imaginary threat. The fiscal cliff is not. It’s time for real job and economic growth.”

← Get a Second Book for a Nickel!
Origins of Israel’s Anti-Arab Racism →