The prospect for a peaceful settlement of the Iranian nuclear dispute is now within sight amid various reports that Iran is ready to make concessions to President Obama. But the U.S. election remains an obstacle with Republicans attacking the very idea of one-on-one talks, notes ex-CIA analyst Paul R. Pillar.

Helene Cooper and Mark Landler of the New York Times caused a stir over the weekend with a report that the United States and Iran had agreed “in principle” to bilateral negotiations regarding Iran’s nuclear program.

Negotiations with Iran on that issue have hitherto involved a larger format, with one side, known usually as the P5+1, including the other permanent members of the United Nations Security Council and Germany. Doubts were cast on the Timesreport by official denials from both the U.S. and Iranian governments, and what is publicly known about just what the two sides may have agreed to is at this time still unclear. 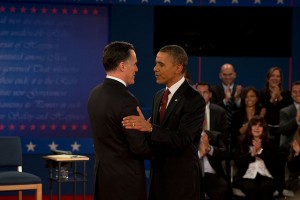 Possibly adding to the confusion is an Iranian disinclination to negotiate further even with the P5+1 before the U.S. election identifies who will be leading U.S. policy beginning in January. Further questions have been raised as to why, if there is indeed a factual basis to the Times report, word of such an Iranian-U.S. understanding would leak out now.

Speculation has ranged from the leak being an effort to torpedo bilateral negotiations to the news story instead being part of an effort by the U.S. administration to start preparing public opinion for an agreement reached through such talks.

I have absolutely no inside track on what exactly is the true version of this particular story, but offer this observation: among the most useful negotiations to take place right now would be U.S.-Iranian talks that are held in strict secrecy and that both governments would deny taking place.

The bilateral format, as a supplement to, not a replacement for, the negotiations involving the P5+1, would be useful because the United States is the most important player in the process, because achieving the flexibility necessary to reach an agreement would be aided by not having to reach a multilateral consensus on each concession, and because secrecy could be better preserved with a smaller forum.

Secrecy would be useful because both sides are boxed in by their own hard-line statements and by pressure from those wanting to make the lines even harder. For the Iranian leadership, doing any direct business with the Great Satan is a matter of considerable delicacy and risk. For the U.S. leadership, doing anything that anyone could describe as being nice and reasonable toward Iran is also fraught with political risk.

Former Israeli intelligence chief Efraim Halevy perceptively noted that the Iranians “would like to get out of their conundrum” given how much sanctions are hurting, but that “both Israel and the US governments have tied our own hands. In the end, you create an inherent disadvantage for yourself.”

The current government of Israel, which is the prime mover in agitating on the Iranian nuclear issue and which disdains the whole idea of negotiating with Iran, is the principal force creating political risk for any U.S. administration that talks with Iran.

The Israeli ambassador to the United States said on Saturday, “We do not think Iran should be rewarded with direct talks,” thereby invoking the old fallacy that negotiations are some sort of reward for one side rather than what they really are, which is a tool for both sides. The Israeli government, as a principal potential saboteur of progress toward an agreement, ought to be excluded through secrecy from any opportunity to commit such sabotage.

The other, not unrelated, source of political risk and possible sabotage for the U.S. side is the domestic political opposition to the current administration. An anonymous “GOP strategist” said Saturday that for the United States to accept any Iranian offer of direct talks “would be a dream come true for the Iranian leadership to hold power, and maybe even get concessions on their nuclear program,” thereby invoking the old fallacy (which Richard Nixon, Ronald Reagan and the subsequent history of the USSR should have put to rest) that negotiating and reaching agreements with an adversary somehow contributes to the adversary’s domestic strength and longevity.

Note also the use of “concessions” as a dirty word, a usage that implicitly rules out any agreement because concessions by both sides will be necessary to reach one.

There is ample historical demonstration of how secret bilateral negotiations, because they are more conducive to achieving the necessary negotiating flexibility, and because they cut out the naysayers and saboteurs, can achieve positive results when other mechanisms cannot.

Some of that history has been in the not very distant past of the United States. The secret negotiations between Henry Kissinger and Le Duc Tho (who shared a Nobel Peace Prize for their efforts) that finally got the United States out of the Vietnam quagmire are a prime example. Nixon’s and Kissinger’s secret diplomacy with China also comes to mind.

We should hope that right now there are talks going on between Iran and the United States that are so secret they do not even generate leaks to the skillful journalists of the New York Times. There may not be, but we can hope.

← Dry Well of the Benghazi ‘Cover-up’
The October Surprise Mysteries →