America’s concentration of wealth at the top has been accompanied by a bolder assertion of political power by the plutocrats, not just in the proliferation of unrestrained Super PACs but also in demanding support for Mitt Romney by employees, note Bill Moyers and Michael Winship.

The new Gilded Age is roaring down on us an uncaged tiger on a rampage. Walk out to the street in front of our office here in Manhattan, look to the right and you can see the symbol of it: a fancy new skyscraper going up two blocks away. When finished, this high rise among high rises will tower a thousand feet, the tallest residential building in the city.

The New York Timeshas dubbed it “the global billionaires’ club” — and for good reason. At least of two of the apartments are under contract for more than $90 million each. Others, more modest, range in price from $45 million to more than $50 million. 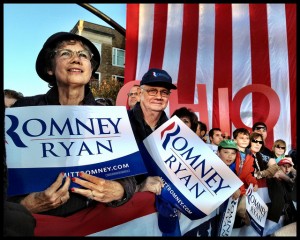 The mega-rich have been buying these places “looking for a place to stash their cash,” a realtor from Sotheby’s explained to the Times. “A lot of what is happening,” she said, “…is about wealth preservation.”

Simultaneously, the powers-that-be have just awarded Donald Trump the right to run a golf course in the Bronx which taxpayers are spending at least $97 million to build — what “amounts to a public subsidy,” says the indignant city comptroller, “for a luxury golf course.” Good grief a handout to the plutocrat’s plutocrat.

This, in a city where economic inequality rivals that of a third-world country. Of America’s 25 largest cities, New York is now the most unequal. The median income for the bottom 20 percent last year was less than $9,000, while the top one percent of New Yorkers has an average annual income of $2.2 million.

Across America, this divide between the superrich and everyone else has become a yawning chasm that studies indicate may stifle jobs and growth for years to come. At no time in modern history has the top one hundredth of one percent owned more of our wealth or paid so low a tax rate.

But in neither of the two presidential debates so far has the vastness of this astounding inequality gap been discussed. Not by Mitt Romney, who is the embodiment of the predatory world of financial capitalism. And not even by Barack Obama, whose party once fought for working men and women against the economic royalists.

But as appalling as all this may be, here’s a new revelation of which you may not be aware. The plutocrats know it and love it and the rest of us should be forewarned: When the Supreme Court made its infamous Citizens United decision, liberating plutocrats to buy our elections fair and square, the justices may have effectively overturned rules that kept bosses from ordering employees to do political work on company time.

Election law expert Trevor Potter told us that now, “corporations argue that it is a constitutionally protected use of corporate ‘resources’ to order employees to do political work or attend campaign events — even if the employee opposes the candidate, or is threatened with being fired for failure to do what the corporation asks!”

Reporter Mike Elk at In These Times magazine came across a recording of Mitt Romney on a conference call in June with some businessmen. Romney told them there is “nothing illegal about you talking to your employees about what you believe is best for the business — because I think that will figure into their election decision, their voting decision — and of course doing that with your family and your kids as well.”

Two months later, Governor Romney was campaigning at an Ohio coal mine. In photographs and on video you can see miners arrayed around him, steadfastly standing in support, right? They work for a company called Murray Energy and attendance at the rally without pay was mandatory.

Murray Energy is notorious for violating safety regulations, sometimes resulting in injuries and deaths. The company has paid millions in fines and in the last two years also donated more than $900,000 to politicians, all of them Republicans.

The CEO, Bob Murray, a well-known climate change denier and cutthroat businessman, insists that his employees contribute to his favorite anti-regulatory candidates or else. In one letter uncovered by The New Republic magazine, Murray wrote, “We have been insulted by every salaried employee who does not support our efforts.” So much for voting rights and the secret ballot at Murray Energy!

Mike Elk also discovered that the Koch Brothers, David and Charles who have pledged to spend multimillions defeating President Obama have sent a voter information packet to the employees of Georgia Pacific, one of their subsidiaries. It includes a list of recommended candidates, pro-Romney and anti-Obama editorials written by the Kochs and a cover letter from the company president.

If we elect the wrong people, Dave Robertson writes, “Many of our more than 50,000 US employees and contractors may suffer the consequences, including higher gasoline prices, runaway inflation, and other ills.” Other ills? Like losing your job?

It’s snowballing. Timeshare king David Siegel of Westgate Resorts reportedly has threatened to fire employees if Barack Obama is re-elected and Arthur Allen, who runs ASG Software Solutions, e-mailed his employees, “If we fail as a nation to make the right choice on November 6th, and we lose our independence as a company, I don’t want to hear any complaints regarding the fallout that will most likely come.”

Back in the first the Gilded Age, in the 19th century, bosses in company towns lined up their workers and marched them to vote as a bloc. Now, the Gilded Age is back, with a vengeance.

Welcome to the plutocracy the remains of the ol’ USA.

4 comments for “Lining Up Romney’s Votes”