When seeking the Republican presidential nomination, Mitt Romney promised to keep the Bush tax cuts and tack on a 20 percent across-the-board tax cut. Now, he struggles to explain how that would work, but even the status quo has helped the rich and damaged the middle class, says former Republican William Frey.

So why are many small business owners rejecting what in 2012 passes for “conservatism” in the GOP? Could it be that they see through Mitt Romney’s arithmetic? Could it be they are nauseated by a GOP that wants to shift even more of the tax burden to the middle class? 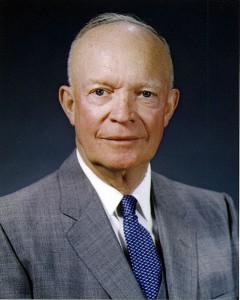 President Dwight Eisenhower, who represented a different era of Republican.

Or might they find it offensive when a politician falsely maligns “the 47%” of fellow Americans for “not paying taxes”, when that same politician in reality has an effective federal tax rate virtually the same, or even slightly lower, than some of those he maligns?

Let’s start by comparing the CURRENT total federal tax rates for a small business owner  with the tax rates  for Gov. Romney:

–$103,637 just happens to be the average net income, according a Treasury Department report  of a shareholder/owner of a business organized as an S corporation which is large enough to have employees.  So this represents a fairly typical small businessman (perhaps, for example, an electrical contractor), who, while perhaps not “wealthy,” is successful enough to employ himself and others, and have a net income of about twice the current median household income of $50,221.

To compare apples to apples, we will assume this typical small business owner and spouse, like Mitt and Ann Romney, file a joint return, have no additional dependents, and that the $103,637 represents their total joint income.

(If, in addition to the standard deduction and exemptions, this couple’s joint return were to include a self employed health insurance deduction, and retirement plan contributions totaling $25,494, the income tax portion would be reduced to $7,066, and the total federal tax would be $19,795, yielding a total effective federal tax rate of 19.1%.  Prior to, and subsequent to the expiration of the 2% payroll tax holiday, the applicable Self-Employment tax rate of 15.3% would apply, which would yield a total effective federal tax rate of between  21.1% and 25.6%.)

Meanwhile, the tax on the $21.7 million of Mitt Romney’s 2010 income was taxed at a rate of 13.9% (14.1% in 2011). A key reason for his low tax rate was the large proportion taxed at capital gains rates, as detailed by Bruce Bartlett, in “Exploring Mitt Romney’s Taxes and Tax Plan”, and “Mitt Romney, Carried Interest, & Capital Gains”.

(The preferential tax treatment of capital gains at these historically low rates is also the basis for taxing of the compensation of hedge fund managers and executives at investment firms at similar capital gains rates through the “carried interest loophole.”)

Let’s now consider the taxation of a member of the maligned “47%”.  An illuminating example would be that of a family of 4, with 2 minor children, and an income of $42,700.  This income is 15% below the median household income, and is a relevant example as it represents the point at which the child tax credit and earned income credit for a family with two qualifying children (combined $2,709 credits for that level of income) balances out their $2,709 federal income tax on “ordinary” income.

This means that for this family, filing a joint return, using the standard $11,600 deduction and the two $3,700 personal exemptions, they pay “no income tax.” Assuming this family has no capital gains, we can now summarize the federal taxation on the $42,700 income of these four Americans who are counted among the “47%” who “pay no taxes” :

Note that the 12.3% to 13.3% ($5,244 to $5,679) range calculated for this family’s Payroll/Self-Employment tax  is due to the fact that we have not stipulated whether this income was self-employment income or wages.  (The IRS reports that the average net income for a Schedule C/Sole Proprietorship return, which includes both full-time and part-time ventures, is $20,854. Clearly, the “47%”  include both wage earners and the self-employed.)

The effective abandonment of the principle of progressive taxation has resulted in a harshly regressive system that taxes financial elites at rates much lower  than middle-class entrepreneurs (in Mitt Romney’s case at rates –13.9% to 14.1% — significantly lower than the federal tax rate — 19.1% to 25.6% — of a small business owner earning roughly $100k) — and which taxes these financial elites with over $20 million in annual earnings at roughly the same federal tax rate as it taxes  a hard-working member of “the 47%” who is falsely maligned as “paying no taxes.”

This striking departure from American tradition is illustrated by contrasting both the business practices and the taxation of Mitt Romney and that of his father George.

George Romney  successfully ran American Motors for eight years, restoring the company’s fortunes with a focus on compacts, and saving the jobs of many American workers.  George Romney then served as governor of Michigan from 1963-1969, before seeking the Republican nomination president in 1968.  When he ran for president 44 years ago, George Romney released, (not two years and a summary of prior taxes paid), but, in their entirety, a full 12 years of federal tax returns.

As Paul Krugman has pointed out, this was, in part, because he “seldom took advantage of loopholes to escape his tax obligations,” but mostly because, in the 1950s and 1960s (the era of the longest sustained economic expansion in our history), taxation of the very wealthy was at much higher levels than today, with effective federal tax rates in the range of twice today’s rates.

It may be of interest to small business owners (and other Americans) that:

but that the lowering of capital gains rates to historically low levels occurred in 2003 simultaneous with two unfunded war deficits.

And the single largest creditor that financed the bonds which made possible this slashing of capital gains rates was not China (as Gov. Romney likes to imply). It was (and is) the Social Security Trust Fund. ($2.7 trillion)

In other words, the surpluses accumulated because of the regular 15.3% retirement contributions typical small business owners and others have paid, on most (and in some cases on every cent) of their lifetime earnings, have been loaned so that the most wealthy could enjoy historically low  taxes, even during a time of war and trillion-dollar deficits.

All thanks to the largess of a retirement insurance fund to which some of the very wealthy (those that structured their income to be in the form of capital gains) were sometimes exempt from contribution.

So, now that we have turned tax rates upside down, and created a tax system when the top one per cent are now taxed at:

what is Mitt Romney’s proposed “solution”?

A $5 trillion tax cut that further reduces taxes on the top 1% who already pay the lowest rates, and further shifts the burden to the middle class, including small business owners.

But he refuses to provide specifics (other than to state he will not consider raising the historically low capital gains tax, or closing the “carried interest” loophole, which allows hedge fund managers and other investment executives to have their compensation taxed as capital gains). Romney’s running mate, Rep. Paul Ryan well, he “doesn’t have time” to reveal the details.

As for Social Security, what are Republican plans for the program which is an essential part of the retirement for over 90% of Americans, whose $2.7 trillion surplus purchased the bonds that made possible the slashing of tax rates for the 1% even as simultaneous wars were waged)?

The Republican Party of Eisenhower, while certainly a party of free enterprise, recognized both the legitimacy and essential nature of Social Security to Americans of all economic classes.  In 1956, after Eisenhower’s first four years, the Republican platform stated:

“The record of performance of the Republican Administration on behalf of our working men and women goes still further. The Federal minimum wage has been raised for more than 2 million workers. Social Security has been extended to an additional 10 million workers and the benefits raised for 6 1/2 million.”

Social Security’s broad and bipartisan support, and success, has rested upon its establishment as a self-funded retirement program, with benefits paid from an independent Trust Fund (whose surpluses are required, by law, to be invested in United States Treasury securities, which are backed by the “full faith and credit” of the United States of America).

But the ideologues of today’s Republican Party seek to break from this fundamental American understanding of Social Security:

In 2010, Republicans, introduced bills into both House and Senate that would have prioritized the honoring of bonds held by China over those held by the Social Security Trust Fund, and which would have treated Social Security benefits payments the same as other general revenue expenditures, ignoring both the statutory and moral right of the Social Security system to the surpluses loaned to the Treasury.

And by preventing the Social Security Trustees from making payments from the independent Trust Fund, it would have ratcheted up the political pressure to cut Social Security benefits so that general revenue expenditures could continue to be financed by Social Security funds.

The essential fact is that the $2.7 trillion in the Social Security Trust Fund will fund full benefits into the mid 2030’s with no changes whatsoever (past a significant portion of the baby boom).  Changes to enable permanent solvency (as opposed to continuing, on a permanent basis, the “loaning” of Social Security funds to subsidize general revenues) are relatively minor.

In order to deprive Americans of their funded benefits, ideological enemies of Social Security do not have to openly “steal” the Trust Fund. All that is necessary is to change to accounting definitions of “sustainable solvency” so as to require a definition of solvency that will require changes so draconian that the Trust Fund will keep trillions on permanent “loan” to the Treasury, which will enable the continuation of general revenue deficits to be funded by Social Security surpluses, thereby subsidizing tax cuts for the most wealthy.

Now in 2012, Mitt Romney selects a running mate who, beyond being an ideological enemy of Social Security, maligns Social Security as “socialism.”  (Paradoxically, if Republicans can succeed in permanently hijacking the Social Security Trust Fund to fund general expenditures, thereby subsidizing tax cuts for the 1%, they will have transformed Social Security from a self-funded retirement program INTO “socialism for the 1%”).

The Republican Party of 2012 is certainly not the GOP of Dwight D. Eisenhower, much less that of trust-busting conservationist Theodore Roosevelt.

Although the narrow agenda of the Republican Party of 2012 would exclude almost all past Republicans, right-wingers have been persistent and skilled at using wedge issues to convince their base to vote against their own interests.

But Americans are increasingly seeing that the survival of the middle class, more important than mere self-interest, is vital to the survival of our democratic republic itself.

And in this struggle for survival, middle-class Americans are finding no friend in the Republican Party of Mitt Romney and Paul Ryan.

William Frey, M.D. is a medical doctor and a former Republican who broke with the party over its increasing radicalization and its failure to resist the Bush-Cheney administration’s shift toward empire and the assault on individual liberty. [This article first appeared at http://www.former-republican.com/]

2 comments for “How Romney Harms the Middle Class”