Amid stepped-up sanctions against Iran, European authorities are cutting off access to Europe’s satellites for Iran’s PressTV and other stations, thus preventing Europeans from hearing Iran’s point of view. Danny Schechter sees the move as a hypocritical assault on free speech and a free press.

Back in the 1960s, a British poet, Adrian Mitchell, one of the great bards of that era, wrote a poem that went on to become a stage show in the West End of London. It was called “Tell Me Lies about Vietnam” and represented one voice among millions in the world then opposing that war.

It was addressed, “To Whom It May Concern” and began with words that became its refrain: 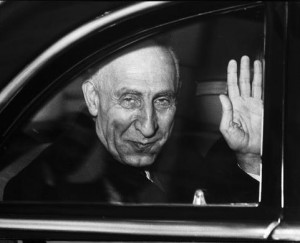 Iranian Prime Minister Mohammad Mossadegh in a photo believed taken in 1951. His nationalist government was overthrown in 1953 in a coup organized by the United States and Great Britain, reinstalling the Shah as Iran’s ruler.

“I was run over by the truth one day

Ever since the accident I’ve walked this way

So stick my legs in plaster

Tell me lies about Vietnam”

Years later, before his death, (and I was at the memorial service in London) he kept rewriting the last paragraph into what he called a remix. The poem took on a more global statement

That verse was a play on a children’s song:

You take the human being, and you twist it all about.”

And then this line:

“Tell me lies about

He understood well that Iran was one of the countries his country and others in the West (and their sycophantic media) are telling lies about.

This poem came to mind in the days after members of the Nobel Prize Committee, for reasons best only known to themselves, decided to sully their Peace Prize by giving it to the European Union, an entity that is very much cheering on the pre-war against Iran with its own draconian sanctions.

These were the same people who, for equally incomprehensible reasons, gave the prize to Barack Obama in the hope it would put him on the path of the peaceful. It didn’t!

A day later, as more thoughtful minds puzzled over the choice of a bloc of nations that has inspired region-wide protests for its brutal austerity programs, the EU took its first act as a peacemaker with media censorship.

It blocked Iran’s ability to communicate with Europeans, even as anyone who knows anything about how peace is made knows that two-way communications is essential. All parties to a conflict need to know what the other is thinking, need to know how they view the world.

Despite the fact that western media is available in Iran, and western journalists frequently report or, as many Iranians believe, “distort” the news from there, the West now wants to seal off more than Iranian oil. Western officials want to sanction Iranian ideas and keep their own people from hearing and seeing what Iranian TV channels consider important. In short, these officials just want the people of the West to hear their own voices, not those of Iran. This is the very essence of a propaganda system posing as a commitment to free press.

Iran’s PressTV had earlier been kicked off British Television on the barest of pretences and now, with the connivance no doubt of Her Majesty’s government, is being barred, along with 18 other Iranian channels, from access to European satellites.

“The channels include Press TV, Al-Alam, Jaam-e-Jam One and Two, Sahar One and Two, Islamic Republic of Iran News Network, Qur’an TV, and al-Kawthar. European satellite firms had been jamming the Iranian channels for months before the decision was announced. Iran’s Arabic-language news channel, Al-Alam, has been jammed on a daily basis while airing a program on Bahrain. Technical experts say the jamming was carried out by British technicians. Observers are saying the jammings and now the ban show the European Union does not respect freedom of speech and is trying to silence the voice of alternative media.”

So when jamming is not enough by countries who are the first to yell the loudest when their signals are blocked, they resort to outright suppression by, in effect, using their power over the “switch” to turn it off, and not let their own people see it.

Thinking about this affront to global communications, one is reminded of the war Adrian Mitchell first wrote about. In those days, it was Radio Hanoi that was blocked. When I was in Vietnam, in 1974, I interviewed a radio broadcaster there who was constantly being denounced for calling on American soldiers to resist the war, perhaps because so many did. She was ridiculed as “Hanoi Hannah.” She, in turn, interviewed me. American spy satellites monitored the broadcast which was about cultural issues. I was later summoned into the American Embassy in what was then Saigon and roundly denounced for talking to the “enemy.”

Years later, it was the American government that was talking to the enemy and suing for peace. The Nobel Peace Prize people then gave their treasured token to U.S. Secretary of State Henry Kissinger, and Vietnam’s negotiator in chief, Le Duc Tho, for their role in the Paris Peace Talks. Le Duc Tho was outraged at this attempt at “balance” between the victim and the victimizer and turned the award down! He stood by his truths. (I met him too!) Today the U.S. and Vietnam are uneasy allies and trading partners.

Banning PressTV is an act of war against ideas, a misplaced maneuver that will not resolve any conflicts, will not promote peace, and will not lead to more respect for Western ideas of “free speech and press.” Quite the contrary, it will foster more polarization and tension and charges of hypocrisy. It is also happening on the eve of new talks between Iran and other nations, no doubt to punish Iran further.

The question is: Will journalists in the West join me in denouncing this latest “sanction” against values that the West says it upholds. Article 19 of the Declaration of Human Rights upholds the right to receive and impart information. This black-out may violate other laws and agreements as well.

This was also the week that Ben Affleck’s hostage thriller “Argo” opened in movie theaters across America. While the movie does criticize the Shah’s brutality, which was made possible by the U.S. and Britain overthrowing the nationalist Mosaddegh government in 1953, it also glamorizes the role the CIA played in freeing six hostages who fled the U.S. embassy and sought refugee in the Canadian Ambassador’s home.

The movie is about an off-the-wall plot to make an imaginary science fiction epic in Iran as a pretense for the escape. It’s very entertaining in putting down Hollywood more than imperialism, but, at the same time, reinforces every stereotype about brutal and robotic Iranian revolutionaries, an image that still mobilizes support for U.S. intervention today.

The CIA must love it, just as it wants us to dismiss the allegations of CIA spying in Iran in those years. I visited the former U.S. Embassy in Tehran and can confirm it was an espionage center supporting the despotic Shah. The Iranians didn’t hate Americans for who we are, but for what our government did. You won’t find that story in any detail in “Argo.”

Lets’ give the last word to the late Adrian Mitchell whose passion was to wake us all up.

“Where were you at the time of the crime?

Down by the Cenotaph, drinking slime

So chain my tongue with whisky

Stuff my nose with garlic

Coat my eyes with butter

Fill my ears with silver

Stick my legs in plaster

Tell me lies about Vietnam”

And, then, may we add, “Tell Me Lies about Iran and ourselves?”