Many Americans don’t know where the Great Middle Class came from. They see it as a natural outgrowth of “free-market capitalism” when it was really the product of conscious government policies, starting with the New Deal. That confusion must be addressed in this political season, says Beverly Bandler.

“President Obama is like a pilot who took the controls of the plane in mid-flight after the engines fell out,” wrote Jonathan Chait in December 2009. “It’s obvious that he didn’t cause the problem. But the passengers are going to focus on the fact that the plane was still airborne before he took over, and now, he’s crash-landing in the ocean.”

Yet, the Republicans continue to agitate the “passengers” who may not understand or may have forgotten what policies from which party brought the nation to this dangerous point: the radicalized GOP (with some help from Democratic enablers). 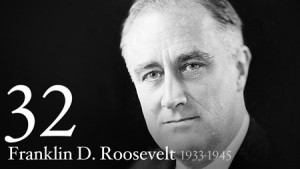 Franklin D. Roosevelt, the 32nd U.S. President and the architect of the New Deal.

The conservatives, who were the chief pilots causing the catastrophe, keep reminding the public that the economy continues to struggle under Barack Obama. (And Mitt Romney says that if the voters simply let the Republicans back in the cockpit, all will be okay.)

It is certainly true that the U.S. economy remains in bad shape, as Jeff Madrick noted this month at The New York Review of Books:

“The Commerce Department just reported that GDP [Gross Domestic Product] grew at an annual rate of only 1.3 percent in the second quarter. Job growth has been tepid, with continued high unemployment and underemployment. When one counts all those looking for full-time jobs and unable to get them, the true unemployment rate is close to 17 percent.

“Meanwhile, the US faces looming threats of a new European recession and a slowdown in China and other parts of the developing world. … But the starkest evidence that something is seriously amiss in the American economy is the dramatic deterioration of the middle class.”[10]

The Pew Research Center reports that “Since 2000, the middle class has shrunk in size, fallen backward in income and wealth, and shed some, but by no means all, of its characteristic faith in the future.”[15]

So, the obvious needs to be pointed out — again: the Republicans and their “Herbert Hoover/Ayn Rand” mindset have obstructed ruthlessly every Democratic effort to improve the economy, starting with the early 2009 stimulus that while admittedly too small (the GOP fought to keep it that way), is credited with keeping the U.S. out of a second Great Depression. [11]

The GOP became emboldened as a result of the 2010 midterm elections, a bad “gift” reportedly from mostly independent voters who apparently don’t read enough and a Democratic Party that consistently fails to do a good job at public outreach.

Democrats (most notably President Barack Obama) thought they were governing with what has been traditionally the “loyal opposition,” but what they faced for the last four years has been the reincarnation of the Spanish Inquisition. Obama, the Democratic Party and all progressives were to be burned at the stake along with any remnants of the New Deal.

Belief and myth form the basis of today’s authoritarian version of the Republican Party’s alternative reality, a “reality” that continues to trump economic history and empirical studies. The nation and its people be damned.

According to Nobel Prize-winning economist Paul Krugman, “Most economists believe the big risk to recovery comes from the inadequacy of government efforts,” an inadequate stimulus. [8d]

There is a broad consensus based on serious analyses that the stimulus, The American Recovery and Reinvestment Act of 2009 (ARRA), a $787 billion stimulus, was an effective piece of legislation (latter increased to $840 billion in the 2012 federal budget).

It was admittedly not enough,the GOP and conservative Democrats fought against it but the reality is the stimulus kept the United States out of a depression and significantly improved prospects for recovery. [11]

But there is one fundamental thing that American voters need to understand about the U.S. economy: The middle class is the engine that drives the economy. All other lessons are secondary to that one reality. And, historically, it has been the Democratic Party, with the help of some moderate Republicans, that has grown the middle class.

A study that reviewed 80 years of our nation’s economic history from the Great Depression and Herbert Hoover, to the Great Recession and George W. Bush, revealed that when it comes to which party is better for the economy, Republicans talk the talk, but it’s the Democrats who deliver the goods.

Of the five best economic presidents since Herbert Hoover, only one is a Republican. [6] Author Lew Goldfarb blames the conventional wisdom that Republican presidents are better economic managers on the inability of the Democrats to tell their story.” [3]

Reporter Robert Parry, among others, has addressed frequently the Right’s skill at “perception management” through their formidable GOP Noise Machine and their consistent determination to reinvent history.[2,13]

Unfortunately, there is no button we can push, no “silver bullet” to fire, that will to get us out of an economic mess that is the result of decades of bad policies, but most particularly the one that began in 2000.

We can be certain of this: doubling down on bad conservative ideas that have been discredited and obsessing over the deficit and slavishly embracing the austerity budget in the face of economic history and empirical studies will lead the United States to disaster.

The American public needs to take its share of the blame. More voters need to turn off the television and read. And read writers who know what they are talking about. A good number are noted below. Here’s one: Jeff Madrick, author and former economics columnist for The New York Times. Some points from his latest article in The New York Review of Books:

–Median household income, the midpoint income of all American households, was reported by the Census Bureau (whose data is a year or so behind) to be down in 2011 compared to 2010, despite an economic recovery that began in mid-2009.

–More disturbing [median household income] is now down to around $50,000, which is 7 percent or so below what it was in 2000 and its lowest level since 1996, adjusted for inflation. Incomes are falling still more sharply for black households.

–The Census Bureau also reports on poverty levels, and these too are reason for serious concern. At 15.1 percent, some 46 million people, the proportion of Americans in poverty is now at its highest level since 1993.

–According to a recent Rutgers University report, more than half of those who have received a college degree since 2006 cannot find full-time jobs.

–The reason that the economic recovery is coinciding with middle class decline is increasingly clear. America is creating jobs, but they are bad jobs: retailing, food preparation, and table waiting, for example,in other words, jobs that don’t pay much.

–Despite deficit concerns, robust action in the jobs market will be urgently needed to counter the growing problem of bad jobs over the next presidential term. Only by encouraging much faster growth through new stimulus and public investment will the government have a strong prospect of reversing the middle-class income crisis.

–It should at least be clear to voters that President Obama’s proposals as they now stand will still add far more jobs in 2013 and 2014 than would Mitt Romney’s. Moreover, while falling short of what is needed, Obama’s general approach could be enhanced if the political environment changes. [10]

The estimated 70 percent of Americans who are sane and retain their common sense i.e. those who don’t worship at the altar of the Market or of Religious Fundamentalism, that is, Democrats, moderate Republicans, Independents, and the “I don’t know where I am’s” need to get to the polls this November and vote for Barack Obama and as many progressive Democrats in Congress as they can.

Tribal politics must be put aside. Then, we need to put pressure on the Democratic Party that has the best ideas and is still grounded in real reality but which has been far too timid (or intimidated?) and in a wimp, react-retrench-retreat mode (partly due to the corrupting influence of money in politics), to ditch the obsession with the deficit and the “phantom menace” debt to provide the government help that must be extended.

We need to get the anti-democratic, anti-republican Citizens United decision reversed. We need to reverse the anti-government attitudes that have been deliberately promoted for political purposes, but attend to reforming government where it needs it. We need to hold the mainstream, corporate-supported media accountable.

Effective good government is the only thing that will protect us from fundamentalists, market and religious: the corporations and religious zealots (christo fascists) who are trying to take over the country and all of us. If government is no longer effective and good, let’s make it so.

To say that this will not be easy nor will it be accomplished overnight is an understatement. But, it can be done. And we can do it if we all need step up to the plate together. Americans did this in World War II and we can do it again.

7 comments for “How to Save the Middle Class”